Verify: Can a baby be blinded with a camera flash?

Who can resist taking pictures of babies? There is a viral story that has been floating around the internet stating a baby went blind because of a cell phone flash. 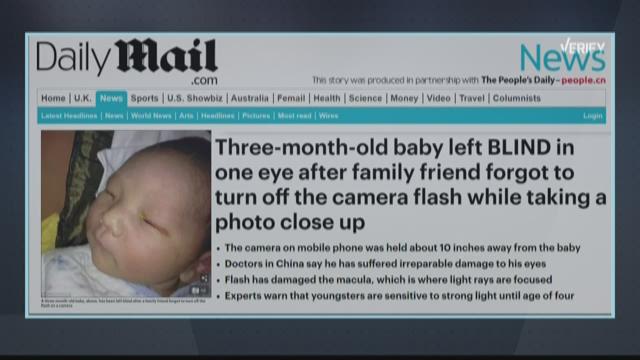 Who can resist taking pictures of babies? There is a viral story that has been floating around the internet stating a baby went blind because of a cell phone flash.

As is so often the case, a well-meaning friend or relative gets in close and takes a flash photograph of a baby with their cell phone. In this case, the baby allegedly goes completely blind in one eye and suffers severe damage to the other.

But is this true? We asked Jacksonville ophthalmologist Jeffrey Levenson just how likely it is that a baby, or anyone, could be blinded by a camera flash.

Dr. Levenson says, "It’s clear that flash cameras don’t damage babies’ eyes. If they did we’d have an entire generation of blind babies, and of course, we don’t. So, flash cameras are perfectly safe for babies."

So, we’re verifying that the "baby blinded by cell phone camera flash" story is FALSE.

However, we weren't completely satisfied. There’s no question that we’re surrounded more and more by L.E.D. lighting. Everything from streetlights to traffic lights, changeable billboards, and, yes, even cell phone flashes.

We wanted to know, is this causing a slow burn to our retinas?

"Incandescent light, which of course Thomas Edison developed 150 years ago, is going away and L.E.D. is replacing it. I’m not aware of any medical evidence to indicate that that poses any risk to anybody," Dr. Levenson says.

So, we’ll verify that any claim that L.E.D. lighting - no matter how common it’s becoming - is a danger is FALSE. However, Dr. Levenson did point out that looking directly at the source of a laser beam can indeed cause serious and irreparable harm to our vision.

Here’s something else, we hear a lot of talk about how today’s kids don’t play outside as much as their elders did. Dr. Levenson says that’s not just adding to America’s waistlines. "Turns out that kids who get outdoors often are much less likely to become near-sighted than people who spend a lot of time indoors in room lighting, doing close things – they’re much more likely to be near-sighted," he says.

No ‘Verify’ on that last point; just one more reason to consider making friends with the outdoors.

If there’s something you’d like us to verify, send us an email at Verify@FirstCoastNews.com.