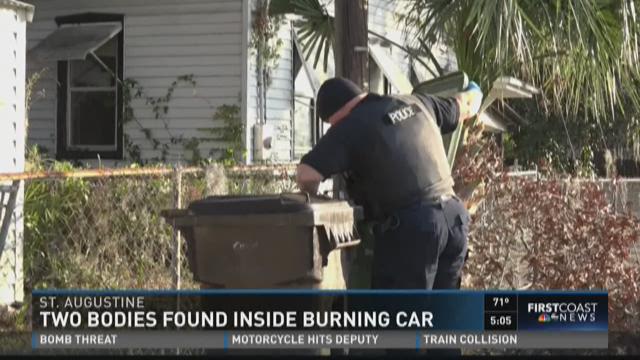 ST. AUGUSTINE, Fla. -- Two people were found dead inside a vehicle in St. Augustine early Wednesday morning. The St. Augustine Police Department received a call from the St. Johns County Sheriff’s Office about a car being on fire at Spring Street and Fred Waters Way.

Detectives coming and going from the crime scene. pic.twitter.com/JsGJsJTv2r

St. Augustine Police public information officer Mark Samson told First Coast News the registered owner of the vehicle does not live in the immediate area. They have contacted family members of this person but did not have much to communicate about it.

Samson said that the deaths were suspicious, however the word homicide had not been linked to the incident yet.

Authorities called out a K9 unit to try and track down any evidence that may lead away from the crime scene.

"We are just trying to cover all our bases at this point," said Samson.

Neighbors tell police they heard an explosion before the police arrived.