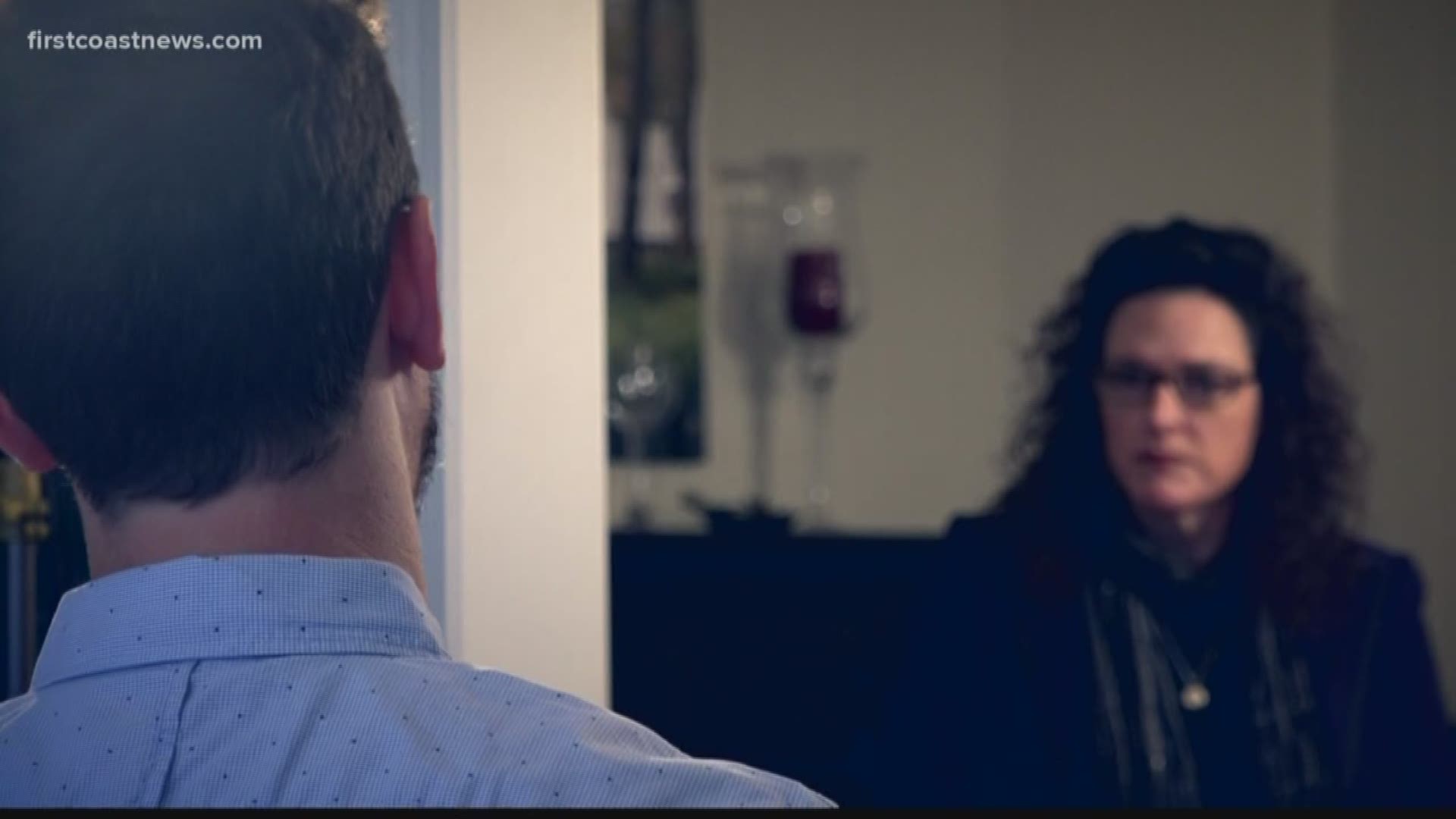 The path from Hollywood superstar to sexual pariah was short for Kevin Spacey.

Overtaken by allegations of sexual assault by several young men, Spacey apologized, came out, and reportedly checked himself into sex addiction treatment – all within a matter of days.

The “October surprise” shocked Spacey’s many fans, to say nothing of his employers like Netflix.

But the mask came off more than a decade ago for some in the local film industry, who say they personally endured Spacey’s persistent, aggressive and unwelcome sexual advances.

Jordan Gurren calls his behavior “predatory.” Gurren interacted daily with Spacey when he served as a prop master on the Spacey film “Elvis and Nixon.” “Really touchy and just creepy in general.”

“I was definitely sexually harassed,” says another former production assistant we are calling Ryan.

It’s important to note: This is not a story that came to us. It’s one we went looking for. As the #MeToo movement gained currency, First Coast News began exploring local angles.

That investigation led us to the set of “Recount,” a film about the 2000 Presidential Election shot in Jacksonville and Tallahassee. We initially connected with Ryan, a local filmmaker who says he was sexually harassed by Kevin Spacey before he even had language for what happened. Like others we spoke to, he didn’t want to use his full name, since he still works in the film industry.

In all, First Coast News spoke to three men who claim Spacey had a pattern of making sexual advances to much younger men on set. All three described similar behavior, all three said they witnessed Spacey making moves on other men on set.

First Coast News also spoke with friends and colleagues of the three who heard these stories when they occurred, or later, but before news of the Spacey sex misconduct allegations broke.

RELATED | Kevin Spacey scandal: A complete list of the 15 accusers

Spacey’s lawyers did not respond to requests for comment. He no longer has an agent or a publicist; both quit following the misconduct allegations.

Ryan worked on “Recount” as a relatively low-level staffer, in charge of corralling extras and keeping the set quiet and secure. He began work on the film with a vague hope of meeting Spacey.

“He was my favorite actor,” he says. “I am a huge fan of ‘The Usual Suspects’ and 'American Beauty.’”

Spacey was an Oscar winner, and Ryan hoped for some contact. “I thought maybe I’d even shake his hand once, or even get a picture [with him],” Ryan says. “That’s as far as I thought it would go. It ended up being a little different than that.”

After their initial meeting, Ryan says, Spacey began greeting him by name. Once, he play-sparred as the two passed in the hallway. “I was like. Oh, that Kevin Spacey -- what a cool dude!” Ryan recalls.

But the interactions soon grew uncomfortable.

“Once he came up behind me, put me in a headlock and gave me a noogie,” he says. “In general, I’m not a fan of being surprise touched by, like, anybody. So initially I was kind of annoyed. Then I realized it was Kevin. And I figured, ‘Oh he doesn’t know me -- he doesn’t know my pet peeves.”

It didn’t stop, despite what Ryan says were deliberately overt 'passive aggressive' references to his girlfriend (now his wife).

“I felt I was pretty clear saying, ‘Hey! I’m not gay. Hey, I have a girlfriend.’ I thought these were pretty clear indications I’m not part of the team.”

The exchanges were too minor to constitute assault, Ryan says. He recalls that Spacey once placed his hand on Ryan’s as it rested on a chair and left it there for a long moment, before grabbing his thumb and tugging it sexually. Another time, he stroked Ryan’s breastbone. Once when they were alone, he put his arm around Ryan’s neck and “pulled me in so close that I felt his 5-o-clock shadow against my cheek.”

“I didn’t feel like I could go forward because I thought for sure I would be fired,” Ryan says. “They would have found another production assistant. It’s much easier to find someone to take my job than to take Kevin’s job.”

Nobody said that, Ryan clarifies. It was just 'an innate understanding.'

“If you’re low-level and you’re trying to break in, you don’t get to be offended. ‘Tough break.’ If you want to keep moving you just suck it up.”

Brian (not his real name) whose work on the set of “Recount” was his first film, tells a similar story. He says Spacey targeted him and several other young men.

“I never felt particularly assaulted or, I don’t know – threatened. But that is definitely his way of operating,” Brian says. “I knew of several others where the advances were more direct. They got offers … suggested sexual activity like, ‘Hey, you want to come back to hotel?’”

Like Ryan, Brian says, he “turned it into a joke as you talk about it. I don’t know if that’s a way of dealing with it, or what? Of course, what we’ve seen come out recently [the Spacey assault allegations] is not funny.”

He adds, “It’s all pretty jokey until you realized somebody got abused. Holy sh*t.”

Jordan Gurren, who agreed to be named for this story because he no longer works in film, says he was cautioned about Spacey before he even stepped on set.

“I was warned by the people working on the show that Kevin liked to find the youngest cutest guys on set and basically go after them.” Asked if that described him, Gurren says, “yeah.”

As assistant prop master, Gurren’s job required him to interact with Spacey daily, including tasks like setting his watch.

“He would be caressing my hands as I was setting his watch, which is just a little odd and uncomfortable. He would come up behind me and rub my shoulders, which was weird, and off-putting. He just got progressively more aggressive in how he made it known he wanted to have some sort of sexual relationship."

Like Ryan, he says, he saw no room to complain. “I felt it wasn’t in my best interest to bring it up with any of the producers,” he says “Everybody knew how Kevin was… I even heard that a couple times: ‘Oh that’s Kevin.’”

The day the news broke about the sexual misconduct allegations, both Ryan and Jordan received a flood of texts from friends, along the lines of, “I guess you weren’t making it up.”

In fact, Ryan’s then-girlfriend, now his wife, witnessed Spacey’s advances one night, at a small party at Spacey’s rented beach house. Left alone with Spacey, he says the actor moved on him, only to be caught by Ryan’s girlfriend.

“It very much looked like a scene from a high school movie,” recalls Ryan. “He snapped away from me in a hurry like -- oh nothing weird happened.”

After the party, he says, insult compounded injury. “He texted me, ‘Maybe next time you can come by yourself leave the girl at home.’ My girlfriend was like, 'Hell no -- hell no to this guy.'"

But Ryan says while he experienced harassment, he did not fear for himself or his safety. For that reason, he is careful to distinguish himself from what he sees as “real” victims.

“What he did to that 14-year-old and what he’s been accused of by other people is far worse than anything I encountered. I want to be very clear on that. I know I’m real fortunate in that regard. I didn’t suffer what they suffered.”

Over the years, Ryan has told the story many times. First Coast News also interviewed a friend of Ryan’s who heard the story at the October 16 meeting of Film Bar Mondays – two weeks before the Spacey story broke, October 29.

“It’s never been a secret for me -- I’m not embarrassed.”

But in coming forward publicly, Ryan didn’t want to use his name. Worried, even today, that those unwelcome advances could damage his career.

Ryan adds, “I’m fine with the Kevin Spacey thing being an anecdote, sort of an add-on to my Wikipedia page. I don’t want it to be the first paragraph.”