The Champs Sports store on Fowler Avenue was lit ablaze and burned to the ground Saturday night. 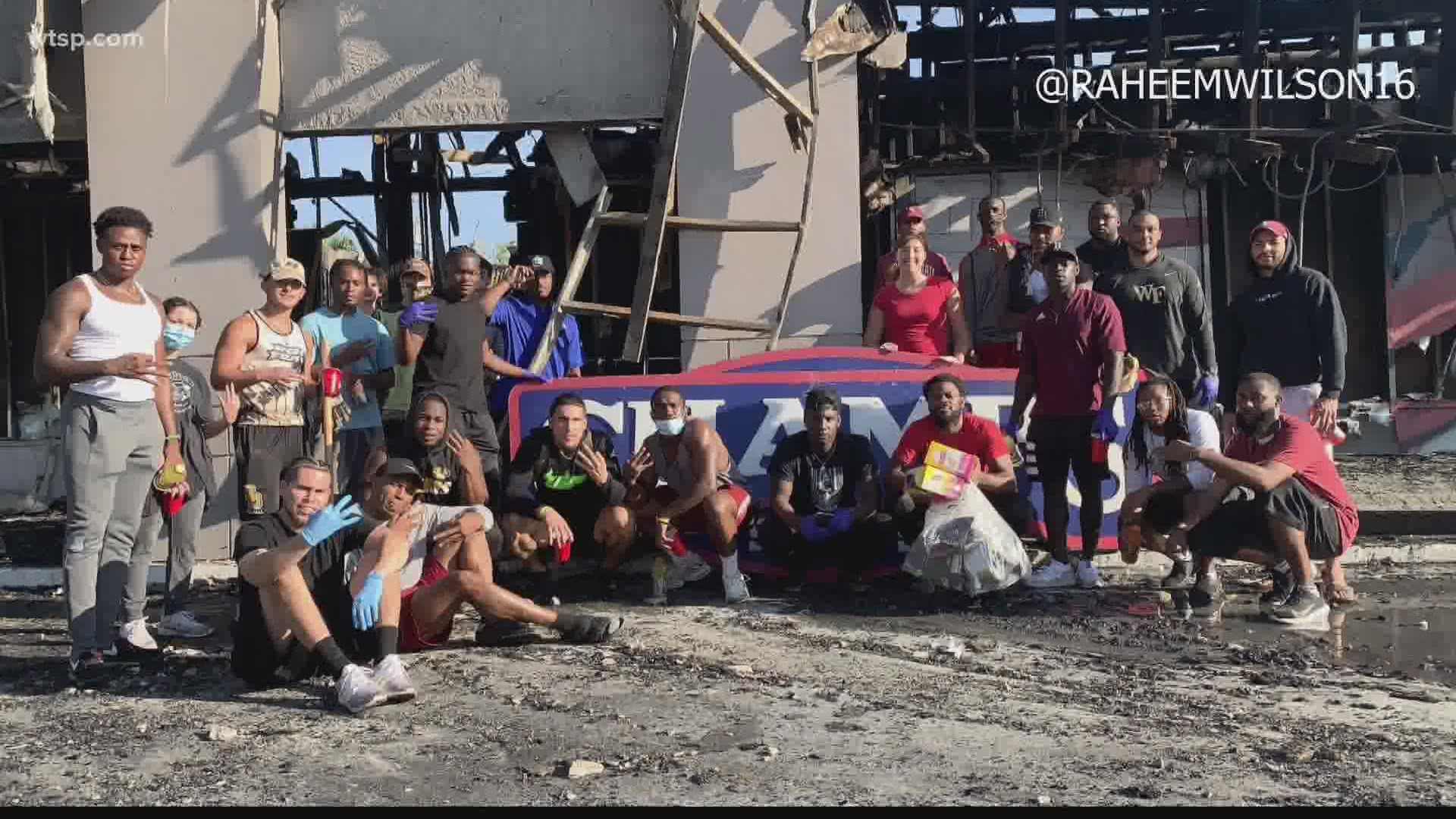 TAMPA, Fla. — A day after protests left parts of Tampa in flames, a group of old football buddies gathered at the Panda Express on Fowler Avenue.

Garbage bags in hand, they crossed the street and headed to the incinerated Champs Sports store. Yellow tape sectioned off the remains, but this group wasn’t stopped.

“We just kind of did it,” Cadi Molina said. “It was kind of funny … we walked right past the yellow tape and the [Hillsborough County] Sheriff Chad [Chronister] was out there. We didn't get bothered by nobody. People saw us out there. They didn’t bother us. They helped out.”

A dozen former and current Tampa-area football players gathered in the University Mall area to clean up the mess left by rioters protesting the death of George Floyd while in Minneapolis police custody.

RELATED: Flames shoot out of Champs Sports store in Tampa

RELATED: 2 deputies hospitalized: 1 hit over head, the other hit by firework amid violence in Tampa

“We're just trying to keep the unity and peace in Tampa,” Molina said. “The city we trust.”

They played either with or against each other during their high school careers at Sickles, Wharton, Howard W. Blake, Alonso, Plant, Strawberry Crust and Gaither. But on Sunday, they were on the same team.

Video of the players’ good deed has now gone viral.

“That wasn’t the intention at all,” Molina, a former Sickles running back, said. “It was just – I got a text from my boy. He was like ‘Yo. We're gonna go clean. We’re gonna hit the streets. I was like ‘Yeah, let’s do it.’”

What started as a text between Molina and his childhood friend Ray-Ray McCloud turned into a group of 30 people, as passersby joined the initial effort.

As a father of a 1-year-old girl, Molina said his mother at first urged him to stay at home.

“My mom was like, ‘Please don’t go out there, it’s crazy out there,’” Molina said. “But, we all grew up in Tampa. We're like – this is our city. This is our home. We don't want to see it burn down. I understand people are very upset or angry, I get it. But the robbing and the looting is not a solution.”

Tate and McCloud were also vocal on Twitter this week:

Molina said he became upset watching violent situations unfold across America and wanted to create an opportunity for positivity in his community.

His message to people in the aftermath of the damage:

“Think about others before you start robbing and looting,” he said. “I know there’s some African Americans that work at that Champs … I want people to really consider others around them and the African American community. How this gonna affect them, their families, and not even just them, but you too. Everybody has families to feed. We have other people to take in consideration.”