Surfs up at Jacksonville Beach, where even surfers from out of the Jacksonville area are coming to catch waves from Florence. 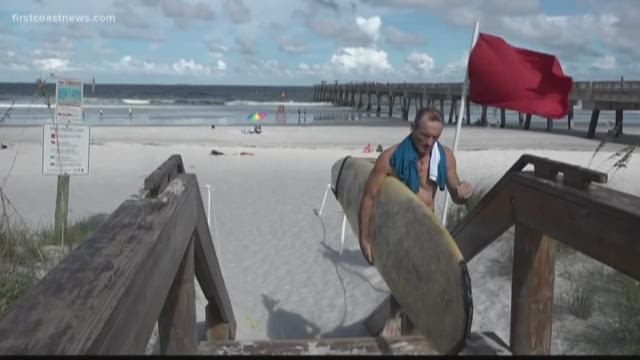 With people up and down the East Coast preparing for Hurricane Florence's impact, and evacuees making their way to Florida, there's one crowd that's not afraid of the storm. Surfs up at Jacksonville Beach, where even surfers from out of the Jacksonville area are coming to catch waves.

Waves Wednesday night are approaching 10 feet high, maybe even more than that. On Thursday, the waves are expected to be the highest they've been all week and the biggest in the state at the time.

"Anybody south is coming this way. They'll be surfing Ponte Vedra or maybe Hanna Park or the Pier," said Tim Stevens, whose surfed for about 40 years. He said he's been surfing three times a day since the rip currents picked up.

The waves these surfers are catching are the ones washing ashore from when Florence was a Category 4 hurricane, 1200 miles away.

"Some people from the outer banks I know are coming down here," said Andrew Weimer, who was surfing with a group of friends. "It's been pretty good so far, 5 to 6 foot, it's getting bigger, on the rise, so that's good."

A red flag has been waving all week, warning beachgoers about the dangerous rip currents. Jacksonville Beach lifeguards said it's not safe to swim, but surfers can get out there at their own risk. They also said they have not had to perform any rescues this week, but they have had to assist two swimmers who needed help getting to shore.