Sunday morning at Impact Church, the focus is forgiveness -- not of moral failings, but of felonies. 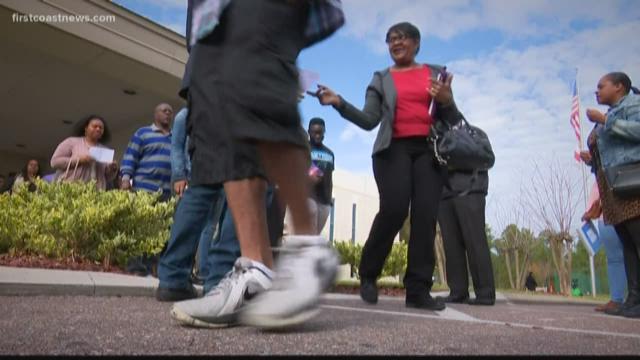 Sunday morning at Impact Church, the focus is forgiveness -- not of moral failings, but of felonies.

Petitions – some 1,500 – are signed and collected, part of an effort dubbed “Second Chance Sundays.” It's a grassroots campaign by the Florida Rights Restoration Coalition to restore voting rights to the state's more than 1.6 million felons who have completed their sentences.

Desmond Meade is one of them. The president of the coalition, he readily admits to making mistakes. A former drug addict, he served time on drug offenses and fraud charges, and was released from prison in 2004. But release didn't mean freedom.

“Homeless, addicted to drugs, I didn't have any hope,” he says. His despair brought him to a train track one night in 2005, where he planned to commit suicide.

“The train didn't come,” he says. “And I crossed those tracks.”

Over the next 10 years, he got clean, got married, even got a law degree. But some things remained out of reach.

“I can't practice law. I can't live anywhere I want to live. And I definitely can't even vote.”

Florida is one of four states that permanently revokes felons' civil rights. Even after they serve their sentence and probation, they must wait at least five years just to ask for their rights back.

It hasn't always been so. In 2007, Gov. Charlie Crist, then a Republican, led an amnesty effort, restoring rights to more than 155,000 people. Gov. Rick Scott reversed that change in 2011, however, and mandated a waiting period before felons could apply for clemency.

Since the clemency board meets just four times a year and typically considers fewer than 100 requests at a time, bottleneck is inevitable. Scott has approved fewer than 3,000 petitions since he took office in 2011. The current backlog an estimated 20,000 people, and the average wait is 14 years.

“The time people have to wait is ridiculous,” says Meade.

If the petition drive is successful, the issue will go on the ballot in November 2018. If approved by 60 percent of voters, felons would automatically have their civil rights restored once they've served their sentence, except for those convicted of murder and sex offenses.

The issue has drawn wide support, including from celebrities like musician John Legend, and from the American Civil Liberties Union, which donated $5 million to the effort.

Devin D. Coleman, himself an ex-felon, heads up the effort in Jacksonville. He remembers the inception of the movement. “Before rights restoration was a big topic, there was a couple of guys sitting at the Ale House in Regency with a vision about how we could make lives better,” he says. “To see where it's come is more than a dream come true. It's kind of surreal.”

The local effort has been embraced by Jacksonville City Councilmember Garrett Dennis and state Rep. Tracie Davis -- in part because restoring civil rights is shown to reduce recidivism. For Davis, who worked for years in the Supervisor of Elections Office, the fact that nearly a third of Floridians are disenfranchised runs counter to her idea of democracy.

“We need to let these people reintegrate into society,” Davis says.

“That's part of our faith,” she says. “There's nobody who's beyond redemption, including felons."

Meade agrees. “America is a nation of second chances. In our innermost souls, we believe in forgiveness.”

Even beyond forgiveness, he says, it's an issue of fairness. “When a debt is paid it's paid in full,” he says. “You can't expect people to keep paying.”

The group needs to submit 766,000 verified petitions by Feb. 1. But the group has already collected more than 900,000 signed petitions, and has set his own deadline of submitting 1 million petitions by the end of the year.