'She’s often powerless': Inside the world of Sugar Baby arrangements

According to SugarBook's internal reports, the average allowance for their sugar babies using the app in Florida: $2,200 per month. 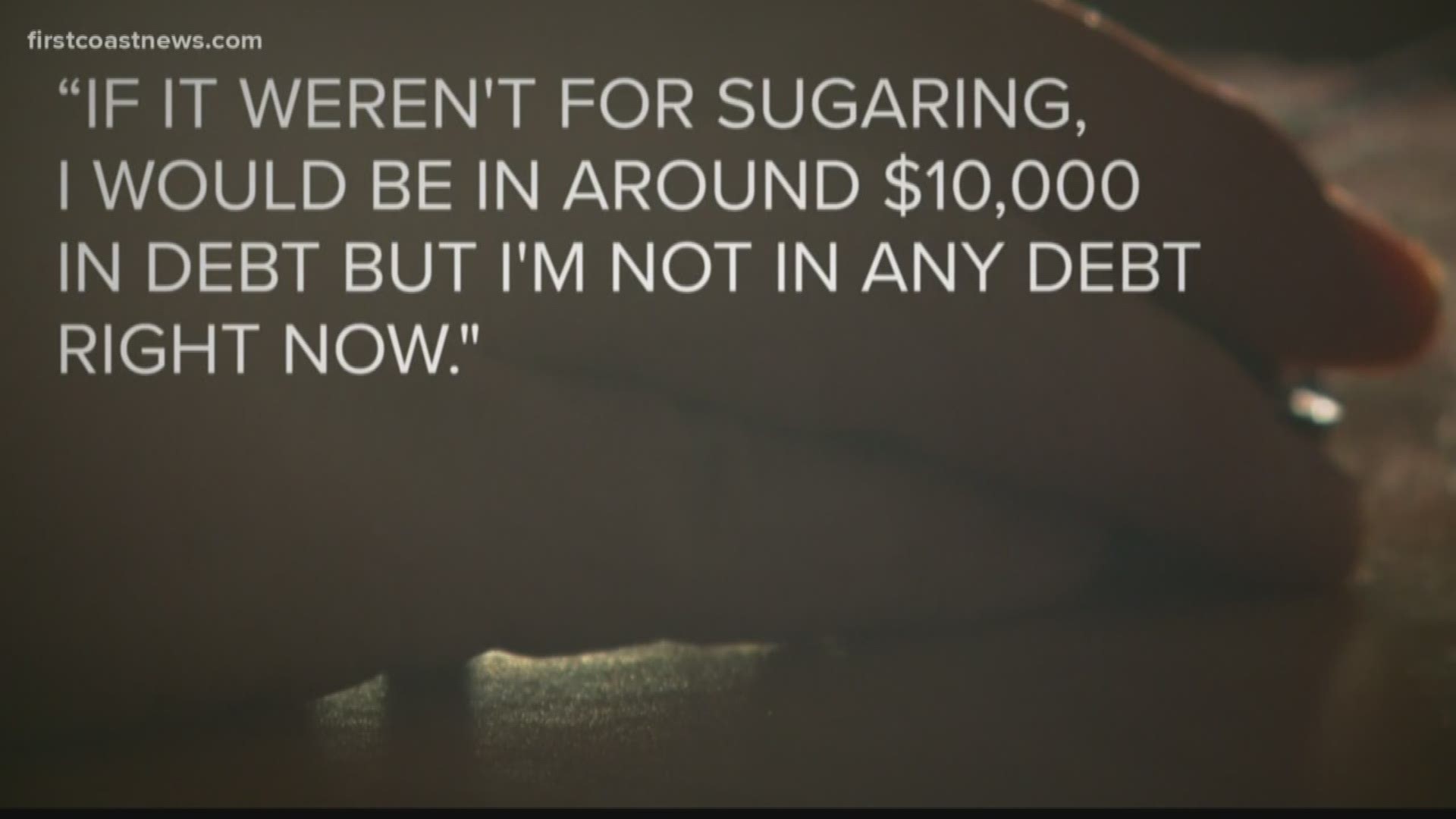 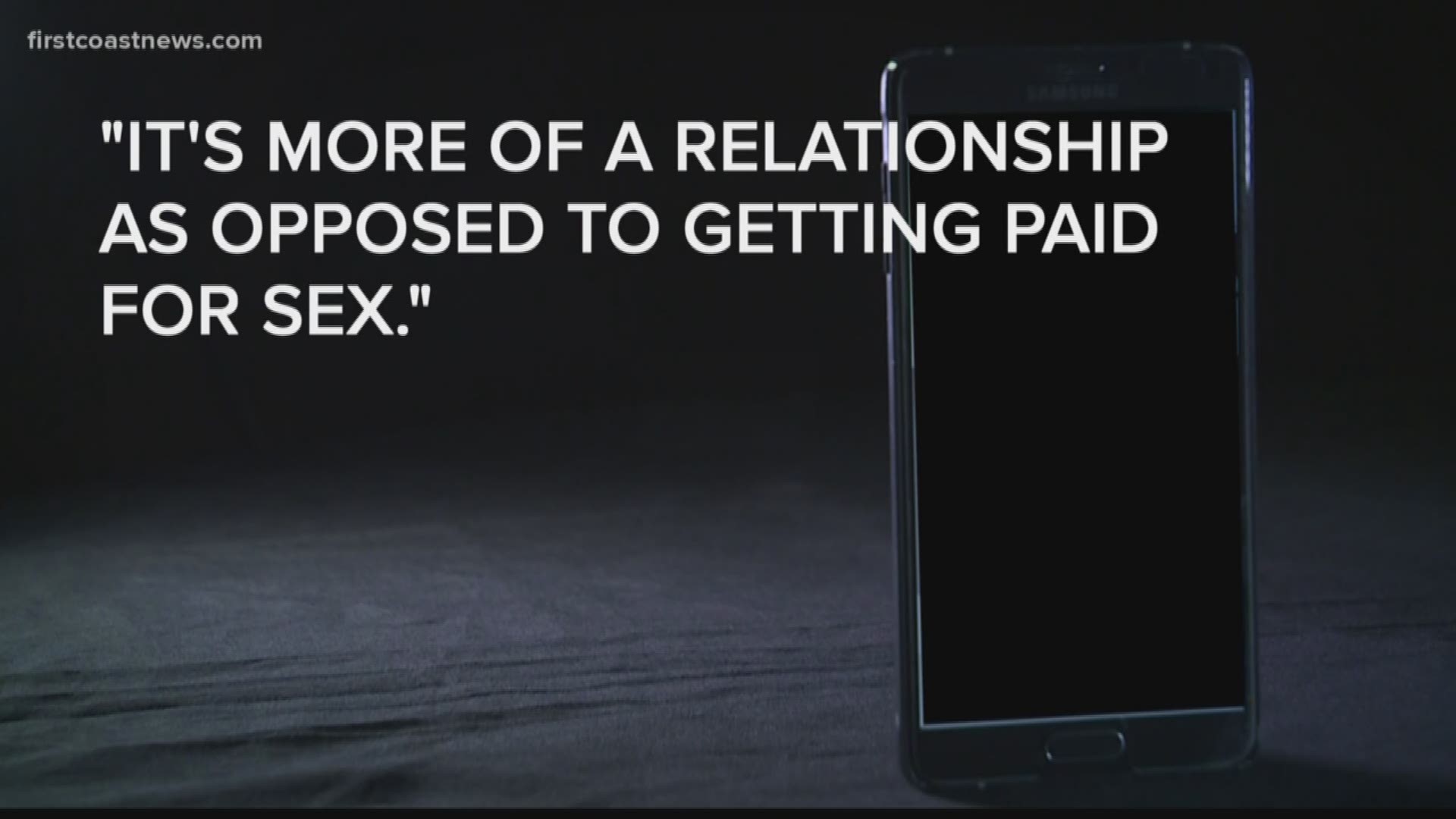 JACKSONVILLE, Fla. — It’s almost high school graduation season. Parents, do you know how your child is going to pay for college?

Some are seeking financial relationships – legal ones – but it's something that even psychologists are concerned about. The girls that get involved in these relationships are known as "sugar babies."

Sugar babies are typically 18- to 26-year-old women who interact with older men who pay them an allowance for their companionship.

A recent report from an arrangement site shows three of the top five most popular schools in the country for sugar baby relationships are found in Florida, and more are signing up each day.

First Coast News found “Emily” through an online post looking to connect with fellow sugar babies and even find a mentor.

She agreed to be interviewed over the phone under the condition of anonymity.

"Emily" is in her last year of college at the University of Central Florida. In 2016, she said she came across an article about how some girls on campus were paying for school.

“So, I had just moved out of my parents’ house and was about to start college," she said. “So I thought why not give it a try? I have nothing to lose.”

She’s had a few arrangements with allowances using a sugar baby site.

Her friends know. Her family doesn’t.

“My parents are religious, so if they ever found out that I did this then I’d be in trouble,” she said.

According to SugarBook's internal reports, the average allowance for their sugar babies using the app in Florida: $2,200 per month.

“We market ourselves as a more honest and transparent dating platform," says CEO Darren Chan, interviewed via video conference from the company’s headquarters in Malaysia."Yes, it is a sugar daddy, sugar baby platform but we want people to be extremely upfront about what they want in the relationship.”

That includes financial arrangements, Chan said. The app is not only for his company, which he says made a six-figure profit last year but also for the users.

Bringing us back to “Emily,” who said without the allowances – she would not have been able to pay for school.

It pays their bills but doesn’t solve their problems says Dr. John Oliver, a psychologist at the University of North Florida specializing in relationship issues.

Oliver explained the anxiety “Emily” feels in her situation is typical among sugar babies.

“They become secretive,” Oliver said, “Which causes them to be less likely for them to reach out to people if they need help.”

Oliver also spoke on this topic with First Coast News in 2014. At the time, dedicated sugar baby websites and applications were still relatively new. Even predating SugarBook, which was founded in 2017.

"There’s a lot of anxiety, of course, they’re young, 18, 19 and 20-year-olds, so they haven’t developed a sense of themselves yet and this can impede that because they’re basically being paid to be a companion," Oliver said.

"Emily" explained that her first arrangement ended after a few months when the man she was seeing wanted more out of the relationship. Another arrangement led to sex.

“I feel like you definitely have to be more careful now if you do want to get into sugaring,” “Emily” said.

Chan acknowledges there are no current procedures for background checks on SugarBook — and when we reached out to other arrangement sites our question also went unanswered.

But a point the CEO and “Emily” wanted to make clear in our conversations is what is being arranged is not prostitution.

“Prostitution is forced, sugaring is a lifestyle, they get to be who they want to be,” Chan said.

He said the business-like relationships carry the same emotional consequences that are seen in paid-for sexual arrangements. Adding it is “detrimental” to self-esteem and well-being.

“Money is power,” Oliver said, “We’d like to convince students that knowledge is power, but in the reality of the world, money is power so she’s often powerless.”