Gov. Ron DeSantis want to propose a fine on 'big tech' companies for restricting speech of political candidates in Florida. 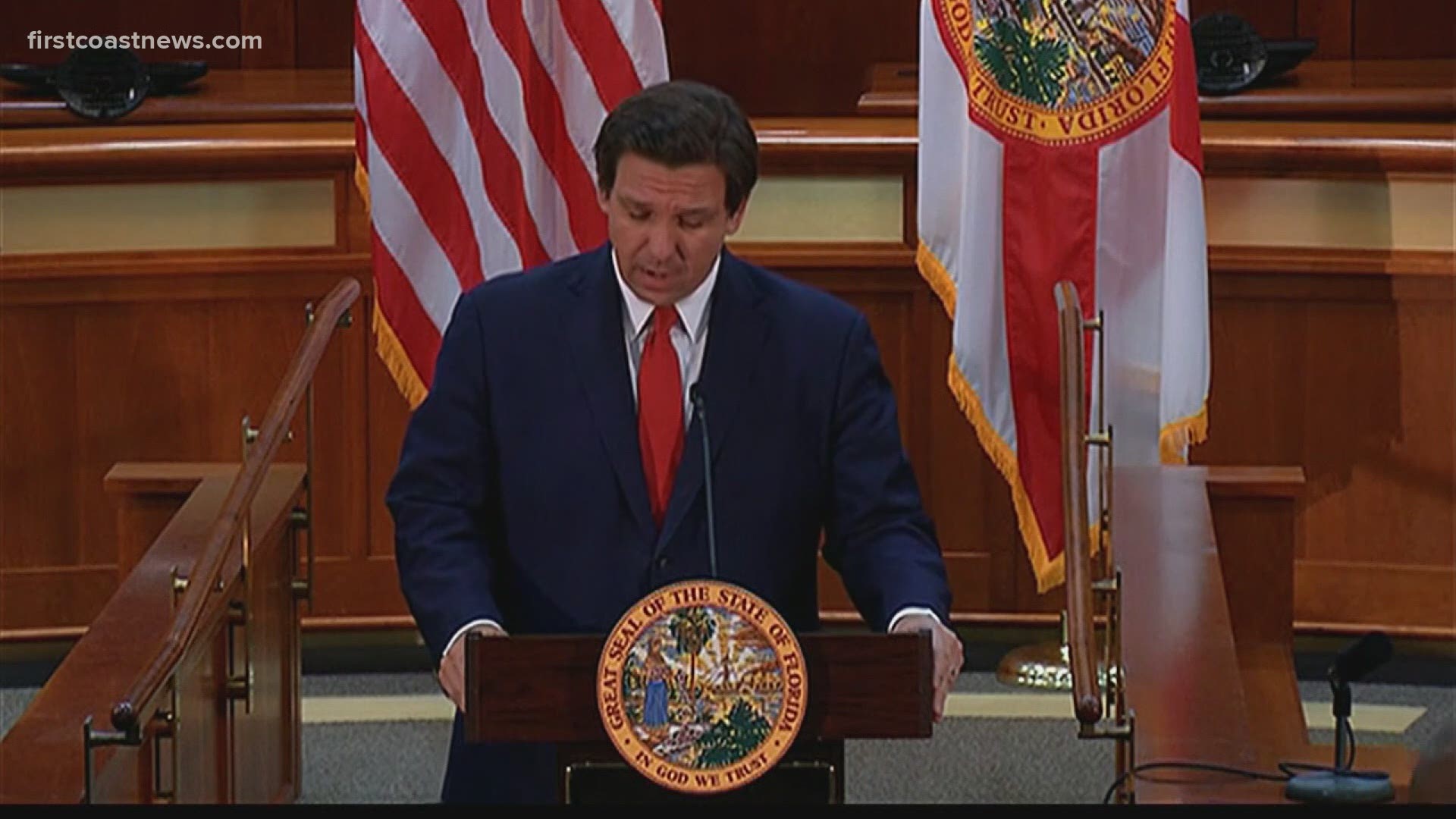 JACKSONVILLE, Fla — Florida Governor Ron DeSantis promised to crack down on "big tech" at a news conference at the Florida State Capitol on Tuesday.

His remarks come after several companies have de-platformed or banned people and websites perpetuating misinformation and conspiracy theories. Those banned include former President Donald Trump, whose Tweets falsely claimed wide-scale election fraud, and Parler, de-platformed by Apple and Amazon after it refused to ban users threatening violence in the service of conspiracy theories.

DeSantis, a vocal Trump supporter, compared what he called "big tech" to Big Brother, and said the content moderation done by Google, Facebook, Amazon and others constitute “political manipulation.”

DeSantis made it clear: Alleged censorship by big tech companies will be a priority this legislative session.

"Over the past decade, citizens could directly connect with large numbers of people and could cut out corporate media outlets entirely," said DeSantis. "Over the years, however, these platforms have changed from neutral platforms that provided Americans with the freedom to speak to enforcers of preferred narratives."

He said that content moderators run by private companies are restricting free speech by removing posts and censoring information. He referenced the recent shutdown of Parler.

"If you don't like Parler, then don't read it," he said. "Let's not have those choices made for us. Or before long, we will have nothing more than someone else's choices imposed upon us by a bunch of monopolies whose core business is to sell advertising."

DeSantis hopes to "preserve Florida's rich discourse" by taking on companies looking to sell and censor information for financial and political gain.

To ensure Floridians are safeguarded against tech companies, DeSantis proposed requiring full disclosure of standards of use, including when they change and an option to opt-out or targeted content/ads based on algorithms.

Also under his proposal, any technology company that de-platforms a candidate for an elected office in Florida during an election could face a daily fine of $100,000 until the candidate's access to the platform is restored.

However, many are left asking if the state have any regulatory authority over multi-national "big tech" companies and how they regulate content or user accounts. The answer: It's complicated, but likely not.

"Essentially what [the state] is trying to do is pass a law that's going to impact a global company," said Dr. Andrew Selepak, a social media professor at the University of Florida. "You have to look at interstate commerce laws, at the First Amendment, a lot of legal issues."

Selepak said that even if the bill, when filed, does not have teeth, it is likely an effort to put large media companies "on notice" and to encourage the federal government to pass regulations.

Federal laws from the mid-1990s, like the Communications Decency Act, aren't effective when it comes to the regulation of platforms that have emerged years after the legislation was first passed.

"The Communications Decency Act, and specifically Section 230, treats [the companies] as platforms rather than publishers, and was created before social media," Selepak said.

And even though users agree to terms of service when they join a platform, Selepak said those terms are malleable and companies can change them freely.

"What becomes a big issue is when they change the terms of service and how it can potentially discriminate against certain individuals, against certain viewpoints," he said.

DeSantis' proposed bill is expected to find wide support in the heavily-Republican Florida legislature, but will likely face significant legal challenges if it passes containing provisions as they've been presented.

Gov. DeSantis says the legislature will address several issues this Fla. session that revolve around censorship by big tech companies. Says under proposal, if a company de-platforms a political candidate they could face fines of $100,000 per day from the state. #FlaPol