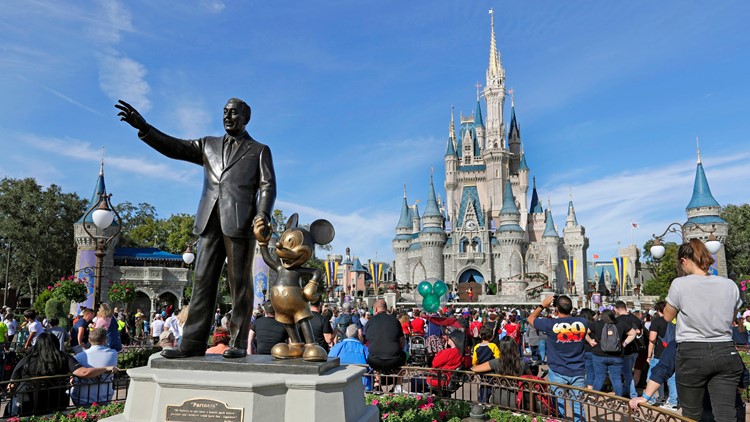 Photo by: AP
FILE - In this Jan. 9, 2019, file photo, guests watch a show near a statue of Walt Disney and Micky Mouse in front of the Cinderella Castle at the Magic Kingdom at Walt Disney World in Lake Buena Vista, Fla. (AP Photo/John Raoux, File)

LAKE BUENA VISTA, Fla. — The magical stroll down Main Street is grinding to a traffic-riddled crawl – in the happiest place on Earth.

It got so packed on Dec. 31, guests who traveled to Orlando from all around the world are being turned away at the front gates, according to Inside the Magic.

News 13 reported, as of 1 p.m., Walt Disney World Resort guests, annual passholders and people with military tickets were still being allowed in.

Families who were lucky enough to make it inside the mouse’s house may not feel so fortunate though. They’ll be able to ring in 2020 with Mickey, but they’ll likely spend most of their day in line after never-ending line.

Wait times are spiking. Riders were reportedly waiting four hours to experience Space Mountain. Any parent with excited young children will tell you – that pretty much makes the magic evaporate into thin air.

Guests who didn’t get past the front gate are being urged to enjoy the other Walt Disney World theme parks that aren’t quite as crowded.

Those include Epcot, Hollywood Studios and Animal Kingdom.

Disney Springs is also an option – and it’s free.