Unemployment expert Vanessa Brito obtained documents from a source inside the DEO, and it’s what agents should be following when answering your call. 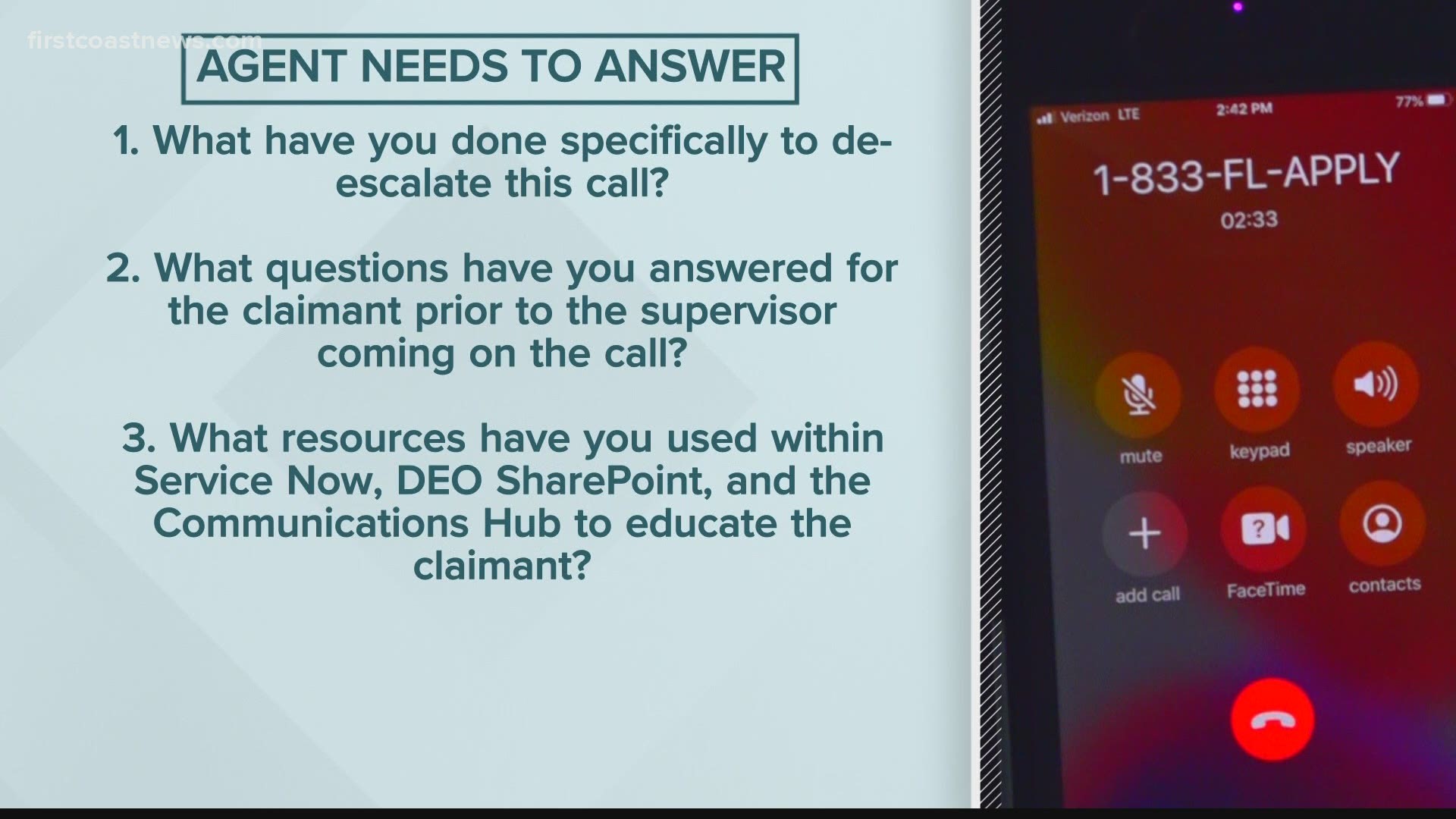 JACKSONVILLE, Fla — Many unemployed Floridians waiting on their benefits have sat on the phone for hours trying to reach Department Of Economic Opportunity call center workers to get their claims fixed.

After all of that waiting, many claimants say not much gets accomplished during those calls.

Unemployment expert Vanessa Brito said there is only so much those agents answering the phones can do. Supervisors are often the people who can fix unemployment claims, but specific steps need to be taken to get in contact with them, Brito said.

First, be sure to tell the agent you would like to speak with their supervisor, but know there is a process to get there.

“It’s important for people to know we do have a right to speak to them, here’s how I need to get there,” Brito said.

Brito said she obtained documents from a source inside the DEO, and it’s what agents should be following when answering your call. Those documents can be found in Brito’s Facebook post.

“Agents get in trouble for reaching out to supervisors without following protocol,” Brito said.

That’s why it’s important for you to make sure the agent sticks to the script shown in Brito’s Facebook post to get you there.

“It’s like a cheat code for a video game,” Brito said.

Brito said depending on the problem with your claim, agents have scripted answers they’re required to provide you before moving forward.

Agents need to answer these five questions themselves to transfer you to their supervisor, Brito said.

1. What have you done specifically to de-escalate this call?

2. What questions have you answered for the claimant prior to the supervisor coming on the call?

3. What resources have you used within Service Now, DEO SharePoint, and the Communications Hub to educate the claimant?

4. In the event a supervisor can join the call, what questions does the claimant have for the supervisor?

5. Do you certify that you have provided all the required information and attempted to de-escalate prior to the claimant requesting a supervisor?

If they refuse to transfer you, remind them this is the process they must follow.

Brito suggests if you’re calling DEO for a problem with your claim, it may be useful to have the documents in front of you to make sure your agent sticks to the script.

If you are transferred, it often takes an hour on hold to reach the supervisor. That’s when some claimants complain they are being hung-up on.

The system automatically hangs up calls after being on the line for two hours with a call taker. Brito says if you are being transferred to a supervisor and will be waiting on hold, remind your call center agent to refresh the clock on your call.