Moskowitz has led the charge on Florida's COVID-19 response as well as the state's vaccine rollout. He will be replaced by Kevin Guthrie.

TALLAHASSEE, Fla — Jared Moskowitz, the director of the Florida Division of Emergency Management, will be stepping down from his position, Gov. Ron DeSantis confirmed Monday.

The governor indicated Moskowitz would be leaving in the future, so he would not have to continue commuting back-and-forth to spend time with his family in Broward County while he works in Tallahassee.

"It's been two years. He's worked extremely hard, and his family is almost a world away in some respects," said DeSantis, who spoke highly of Moskowitz – even suggesting he would make a great FEMA director.

Moskowitz has led the charge on Florida's COVID-19 response as well as the state's vaccine rollout. He was appointed to the role by DeSantis in January 2019 after working in emergency services for more than 10 years.

Moskowitz did not give a timeline for his departure, but he told USA TODAY it would be a "gradual transition."

Last month, Moskowitz claimed that planning for the COVID-19 vaccine rollout was undermined by a lack of information from the federal government. He added that many of the issues seen in Florida's vaccine distribution were a result of a "supply problem."

DeSantis said Kevin Guthrie, Moskowitz's deputy at the Florida Division of Emergency Management, will replace him when the time comes.

"I have a lot of confidence in Kevin. He's been fantastic. He's been in the emergency management space for a long time," DeSantis said.

In his letter of resignation, Moskowitz said he was grateful to the governor for the opportunity he gave to a "progressive elected Democrat" to join his administration.

"If only more people could put aside policy differences for the benefit of Americans we would be better off as a country," Moskowitz wrote.

The director thanked his FDEM staff for all their hard work, especially when it comes with the caveat of being away from their families a majority of the year.

"While I don't know why I found myself at the center of two fo Florida's greatest tragedies, I know I gave both of them everything I had. I have put Florida's families above my own and while I will now hit the pause button on public services, the work goes on, the cause endures -- I'll be back," Moskowitz closed his letter with.

You can read the full document below. 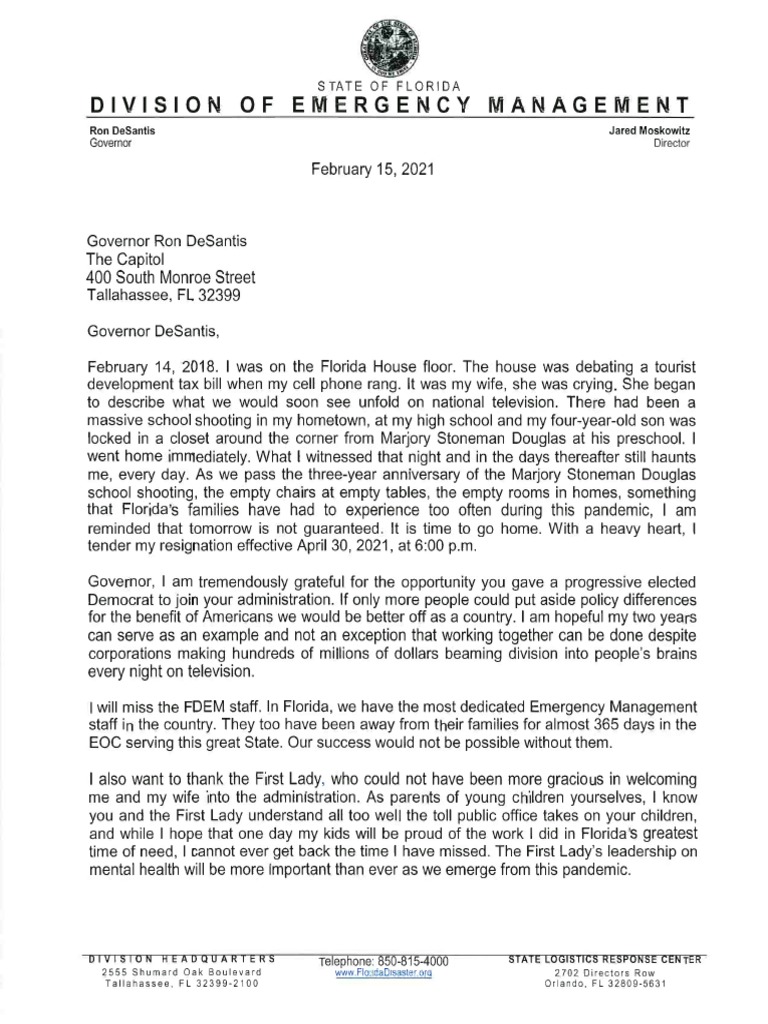 New University of Florida campus could be coming to Jacksonville