The controversial legislation changes Florida's vote-by-mail system, including by restricting drop box use and altering how requests are done. 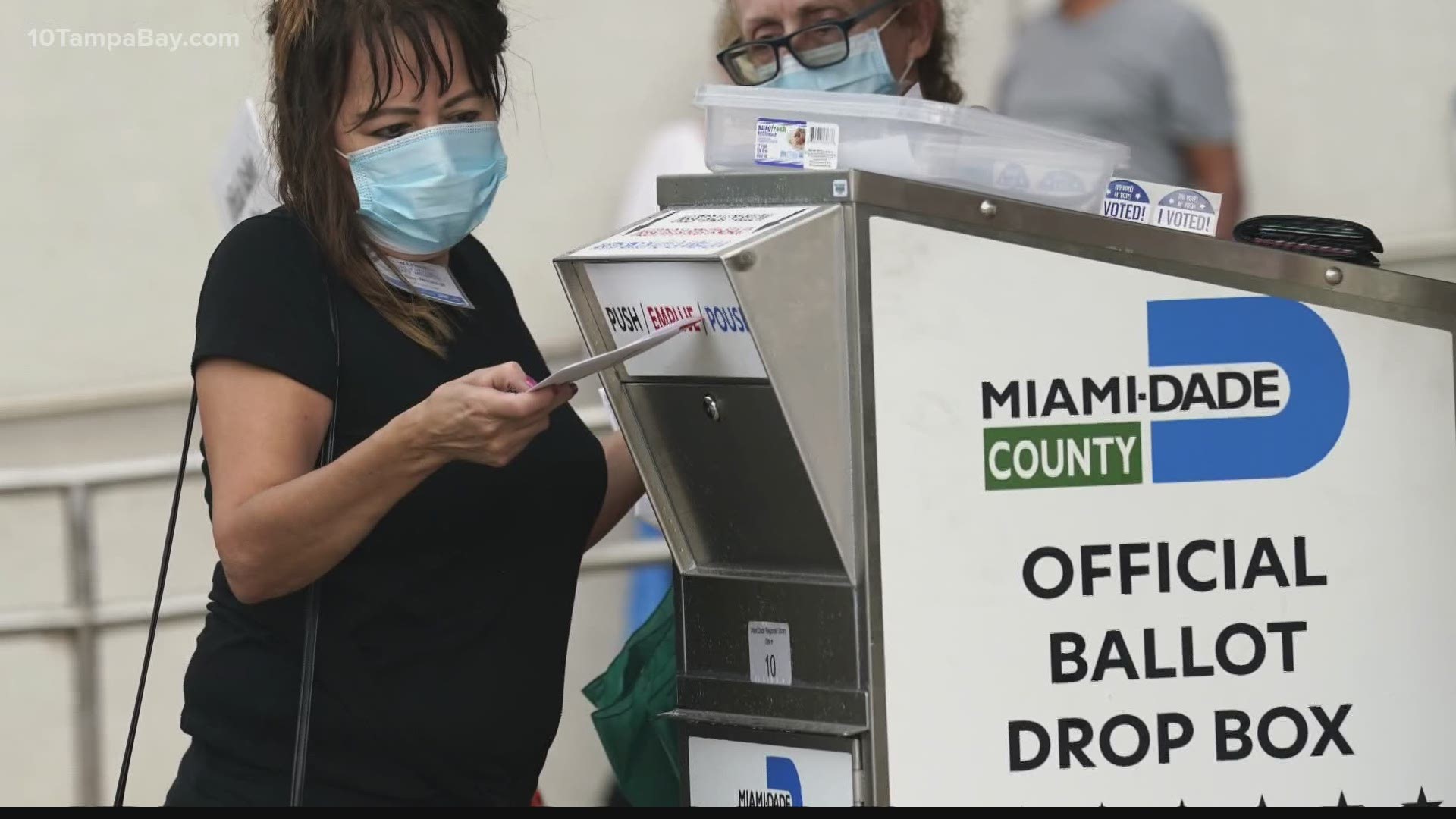 The bill signing was closed to local media.

The GOP-backed legislation, which the governor has been a vocal supporter of, places new limits on ballot drop boxes, among other things.

“Florida took action this legislative session to increase transparency and strengthen the security of our elections,” said DeSantis.

Critics of the bill have called the measure a piece of voter suppression. Democratic lawmakers have said SB 90 would make it harder for seniors, people of color, and individuals with disabilities to vote.

"I am outraged. You should be outraged. Let’s talk about how he did it. Two miles from his master at Mar a Largo," she said. "The only people invited were Trump fans and supporters. This was not a press conference. He did this in a closed location with only political supporters."

She also pointed out DeSantis' high praise for how the state handled the 2020 presidential election.

Senators who've pushed back against the bill questioned why changes needed to be made if Florida's own governor touted the security of the state's last election. Earlier this year, Gov. Ron DeSantis called Florida's elections the "most transparent and efficient election anywhere in the country."

"Why can't these states be more like Florida?" The governor inquired at the time.

Still, the governor was in favor of making changes to voting rules, saying the state couldn't "rest on our laurels."

At least two lawsuits have already been filed – within minutes of DeSantis signing the bill. You can read more about the lawsuits by clicking here.

The new law changes Florida's vote-by-mail system. Some of those changes include restricting drop box use to a county's early voting hours rather than allowing ballots to be dropped off 24/7, making in-person monitoring of all drop box locations mandatory as well as a whole host of other security measures for vote-by-mail. Voters would also be required to submit vote-by-mail requests every election cycle instead of every two cycles.

“I’m not a fan of drop boxes at all – to be honest with you – but the Legislature wanted to keep them. But they need to be monitored. You can't just leave these boxes out where there’s no supervision,” DeSantis told Fox News.

DeSantis went on to talk more about the changes to drop boxes.

“The drop boxes will be available only when they’re monitored and during regular voting hours,” DeSantis said.

Later Thursday in Panama City Beach, the governor added that with this new law "we are going to make sure our elections are transparent."

He also raised issues with the involvement of private groups during election season, the implementation of voter ID and ballot harvesting.

Another change would expand the no-solicitation zone around polling places to 150 feet. That means no one within that distance could attempt to solicit votes or distribute items like water.

More changes to the state's voting laws include a new uniform statewide voter registration application that would highlight whether an applicant has been convicted of a felony and has had their voting rights restored. And, signature verification for voters, meaning voters must have a "wet signature" that they physically signed on paper on file.

"Nothing about Florida’s elections has shown a need for this law," Gross' statement read. "In fact, legislators should be encouraged that Floridians turned out in record numbers to participate in their democracy. It should prompt our legislators to seek ways to improve voter access by streamlining voter signature-matching procedures and ensuring uniformity across all counties, or encouraging more equitable polling places."

Even before the bill was signed by DeSantis Thursday, one voter advocacy group said it would legally challenge the new law, according to the Palm Beach Post.

“We have multiple grounds to challenge this, especially attacks on vote-by-mail,” Jorge Vasquez, an attorney for the Advancement Project’s Power and Democracy Program told the Palm Beach Post. “We’ll act swiftly.”

However, a proponent of the new law told the Palm Beach Post it's a "sensible, preventative measure."

“When we're talking about more voters casting absentee ballots, and when you need to restore faith and confidence in elections, steps like bringing voter ID to absentee ballots and banning ballot harvesting and trafficking makes a lot of sense,” Jason Snead, executive director of the Honest Elections Project, told the Palm Beach Post.

In a statement during his Panama City Beach press conference, the governor offered this explanation as to why local media was closed out from the signing:

"We did a wonderful bill signing, for this great elections bill, and it was live on national television on Fox and Friends. We were happy to give them the exclusive on that. I think it went really, really well. But that’s broadcast to millions of people not just—obviously throughout the whole country. Huge number of people in Florida are watching that. We had a crowd, probably had 1,000 people in the crowd, that were really cheering on. So, it was an exciting day to be able to do that. It was the first bill signing I’ve ever done live on a national broadcast. So, it was good. We also had a great visual aid that we were able to show—showing all the great things that are in the bill."