Beauty From Hell: How a Jacksonville woman copes 3 years after her babies were shot in her arms 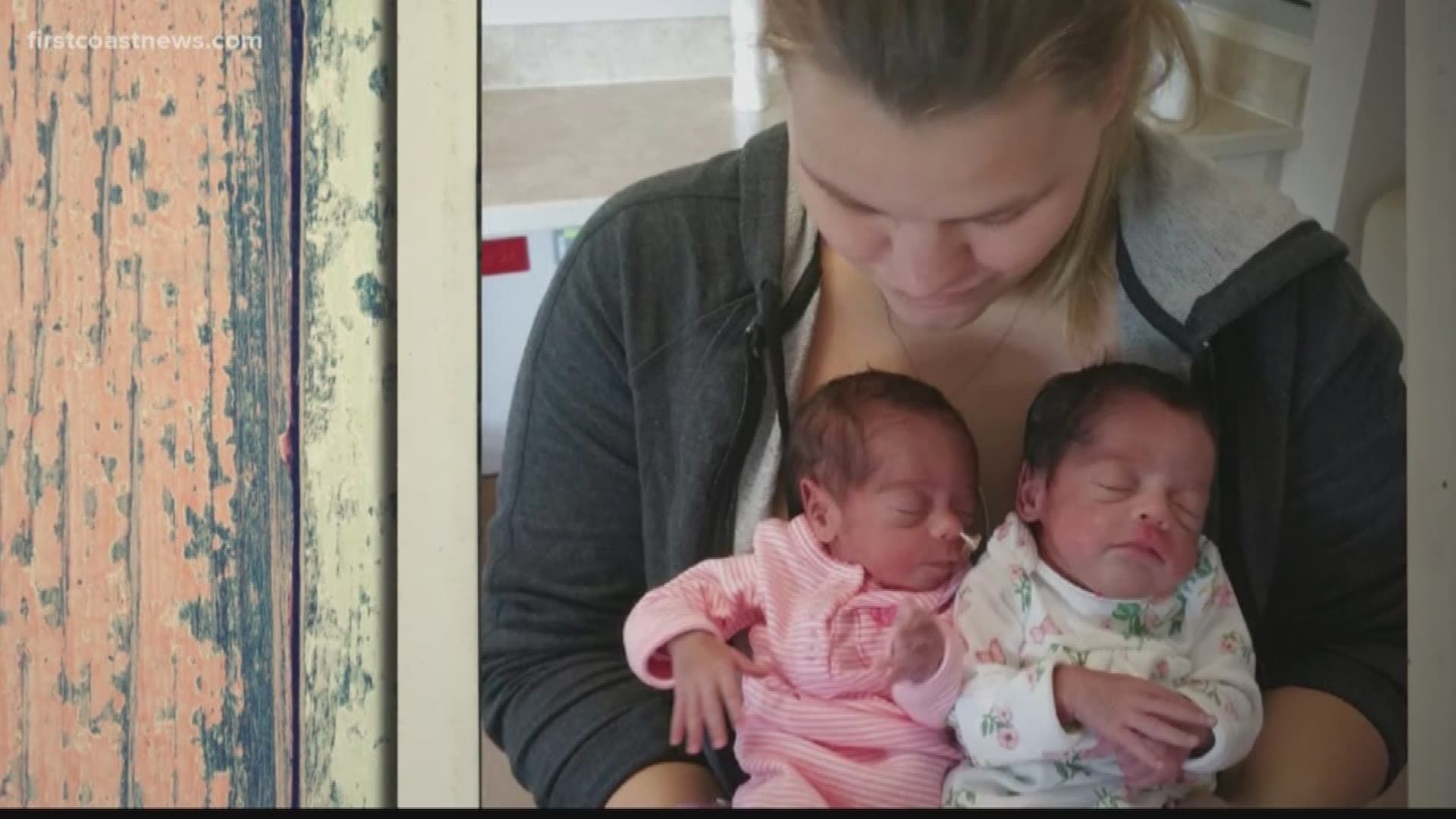 Credit: Megan Hiatt
Hiatt says she felt the "Spirit" tell her to play dead. She believes God saved her life for a mission, when her boyfriend grabbed an AR-15 and started shooting. Now, as a survivor, she promises to help other victims of domestic violence.

On Nov. 13, 2015, Megan Hiatt's boyfriend, the father of her baby twin girls, came home early from NAS Jax and shot Megan's dad, the babies, and then killed himself. He left Megan bleeding on the floor with seven bullets inside her. She had told him she was leaving. His abuse was too much.

Credit: Megan Hiatt
Megan says, "I never got to hear them say, 'Mama.'" But now she feels peace they're in Heaven, she says, with her father.

Megan says, "He would wake me up at three in the morning and scream at me. 'You are an f-ing waste of space. You're fat. You're ugly. What kind of mother are you?'" If she asked to buy toothpaste, she says, he'd yell at her because she wasn't earning her own money for "basic necessities."

But she didn't realize it was abuse. "He never hit me," she said.

Now Megan sits in front of a mirror with a new spirit. "It was a fresh start," she said. These days Megan is a pro at putting on eye make-up, a significant step because she has a prosthetic eye. "The eyeliner is hard because I'm blind in one eye," she explains. But she applies it smoothly.

Megan remembers when she was shot in the face. "I could feel my eye dangling out." The blood was streaming into her mouth. But she never quit on her will to live on.

The make-up is no longer just to cover up scars. "I'm finally where I need to be," she said with a true smile. "I now feel like the strongest, prettiest woman there is."

Megan is excited about what will happen this May.

From there she plans to keep going with advanced degrees, even a Ph.D., so she can be a force nationwide in the battle against domestic violence.

She's been speaking at events for the Hubbard House in Jacksonville and, to her, that's just the beginning.

"I've really developed as a person and a believer in Christ," she said, explaining how she's made it beyond the trauma.

"If you are afraid to be where you are, if you are scared he will cause you harm, you have to leave," she said. "You need to go."

Megan said, "When you find a safe time, you go. Clean out your bank account. Don't worry about taking TV's. Don't worry about couches. Your lives matter more."  Megan regrets packing herself. It gave him "too much time," she said.

Megan says she finds peace visiting the cemetery where her dad and babies are buried. She always reads to her baby girls.

"There's no place -- not one --- where my love can't find you." That's one of her favorite lines from a book she carries to the cemetery.

Credit: First Coast News
HIatt says she tried MNRI therapy to cope with her anxiety, nightmares, and panic attacks from PTSD. She says it worked. Nothing else did -- from pills to talk therapy.

Her progress hasn't come easily, though. Megan was diagnosed with PTSD. Sounds -- from the front door opening to the popping of fireworks -- would set off panic attacks. During the day, she says, she would often go hide in a closet.  At night she struggled, too. She had more than 20 nightmares a week.

"Did anything help you with your PTSD?" First Coast News asked Megan. Her reply: "Nothing. Nothing." She tried prescription medicines and talk therapy.

Then a friend recommended she try MNRI therapy. "It sounded like hocus pocus," Megan said. She committed, though, to six weeks in therapy with trained MNRI therapist, Devon Nicholl-Ewert at Majestic Oak Kid Connections in St. Augustine.

Megan credits the therapy for almost eliminating her nightmares. They are down to one or zero a week, she says. She can drive now and sleep on her own. "I believe for eight months after the hospital my mom slept with me," she said.

MNRI stands for Masgutova Neurosensorimotor Reflex Integration.  It's a complicated science with the goal of calming down the brain's reaction to trauma.

It is not a massage. It is not talk therapy. Nicholl-Ewert said, "We're trying to set up the brain to feel safe."

An occupational therapist, Nicholl-Ewert has trained at the MNRI center in Orlando. MNRI teams, she says, have helped victims of the Chernobyl nuclear disaster, the Sandy Hook Elementary School mass shooting, and the Boston Bombing.

Nicholl-Ewert said many different protocols are involved, but, basically, "I'm sending signals to the brain through the tendons." The idea is to reprogram at the subconscious level and turn off the "alarms" in the conscious mind.

Megan chose to stay in therapy for months, instead of weeks. She says she's grateful for the help and feels as if God led her to something she'd never heard of to deal with her trauma.

Now she can say in strong words, "I've come very far."  If anybody is equipped to help other victims of domestic violence, Megan is it. And that's exactly her goal now in life.