A new proposal offers to cancel out student loan debt for million of Americans. 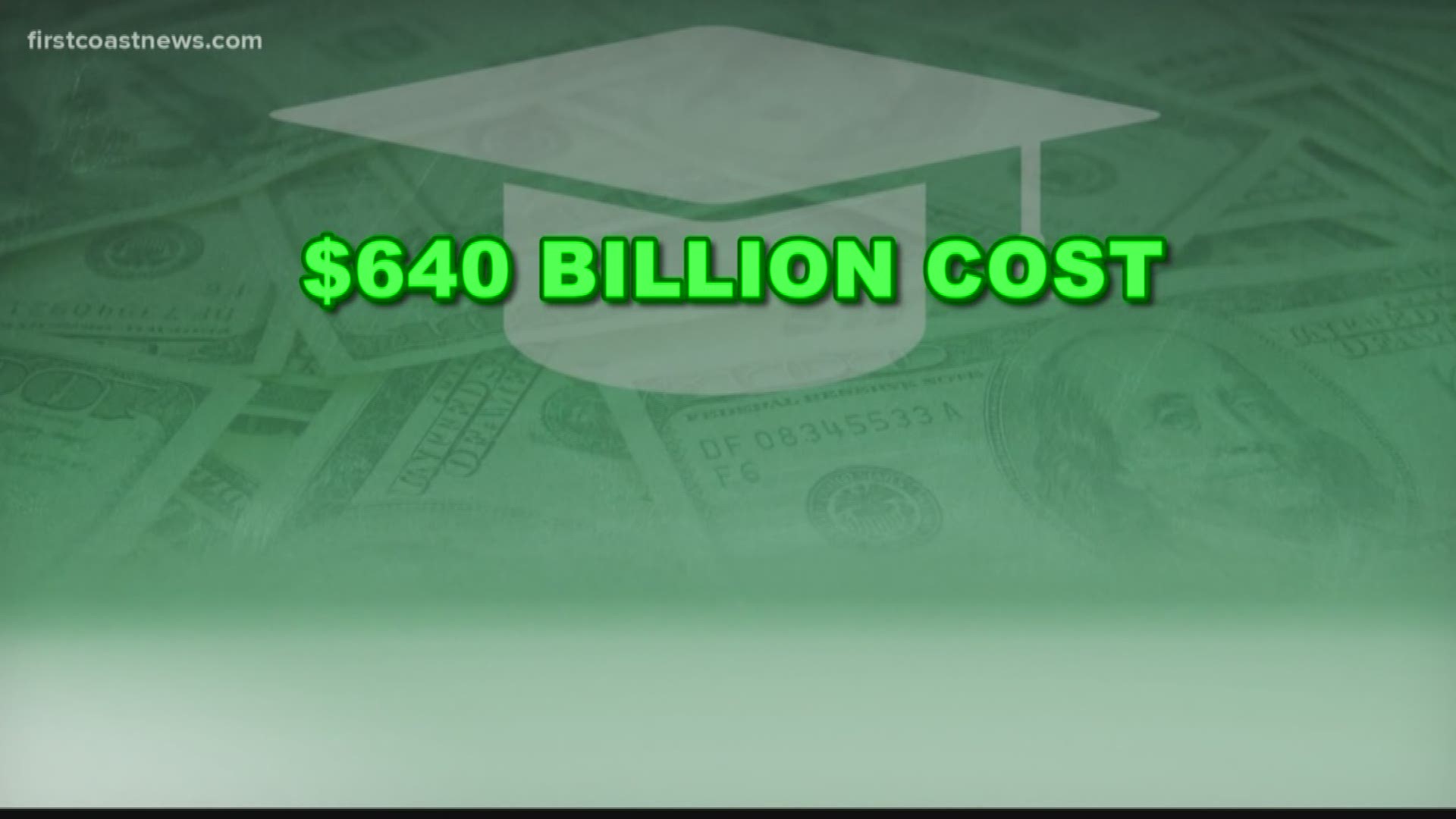 JACKSONVILLE, Fla. — A new proposal offers to cancel out student loan debt for million of Americans.

Right now, the government offers repayment plans. If you work in government or as a public servant, you can qualify for a 10 year repayment plan. As long as you make payments for 10 years, whatever debt is left over after that time can be forgiven tax-free.

Other students can qualify for a 20 year repayment plan. The same rules apply for the longer time period, however, whatever debt that's forgiven at the end of 20 years is taxed.

Her proposal would allow former students to immediately wipe out their debt. Households making under $100k could cancel up to $50k, but, the amount available declines by $1 for every $3 they make over $100k. So, those making up to $250k could qualify for partial debt cancellation.

Senator Warren says the debt forgiveness would create a one-time cost to the federal government of $640 billion.

Leanne Ludvigsen met with counselors at the University of North Florida's Financial Aid building with her two daughters Monday night. Both of her girls are future students there. Ludvigsen says she's had a bad experience with student loan forgiveness plans.

"I don’t believe a lot of what the politicians say," she said. "Rather than them saying what they’re going to do, I’d rather see action."

Because of her own experience with student loans, she’s skeptical of Warren’s proposal.

Ludvigsen is a teacher, so as a public servant she qualified for the 10 year repayment plan, but she says, once her ten years were up, it didn't pan out as expected.

Thanks to Florida’s prepaid program her daughter’s college tuition is already paid off. She says she started paying it off when they were just one year old. Many other students reap Florida's tuition benefits as well, like the Bright Future Scholars program.

But for Ludvigsen, nearly 17 years after graduating with her master degree, she’s still paying for her own debt, despite the government's repayment plan.

"It’s been so difficult dealing with the student loan department we’re just going to pay it now."

Her struggle is a familiar one, especially in the financial aid office where Director Rod Andrews meets with students and parents daily to help work out the payment plans.

"We’re graduating more and more students with more and more debt," said Andrews. "If the rates keep going up at the rates that they’re going, we will reach a tipping point."

He doesn’t think Senator Warren’s proposal is perfectly buttoned up, but he thinks it’s heading in the right direction. He said he still wants to know how it would be rolled out and how it would impact current repayment plans.

While many students may be hopeful that this proposal passes, it received criticism from many people on Monday who either paid off their loans already or didn’t go to college and don’t want to foot the bill.

"I think it would be shortsighted to look at it that way, to say helping people with this issue is unfair," said Andrews.

He believes we should look at loan forgiveness as a benefit to the entire country.

"I see it as an economy problem, if it keeps going this way it will affect the whole economy."

Senator Warren has pointed to her proposed “wealth tax” plan, a way to levy taxes on the wealthiest Americans, to fund the full extent of her proposal

There are different repayment and consolidation plans offered by the federal government right now. You can find the full list of offered plans here: https://studentloans.gov/myDirectLoan/additionalInformation.action

Only the federal government can offer student loan forgiveness and consolidation. Andrews warns of students to be wary of scams because as the student loan debt problem increase, so do the scams.

Andrews also points out that UNF's default rate is less than 2%. He recommends that all parents and students look into the default rate at every college since they all offer different aid andfinancial opportunities.