The pandemic isn't stopping thousands of Central Texans from showing up to vote early in person. 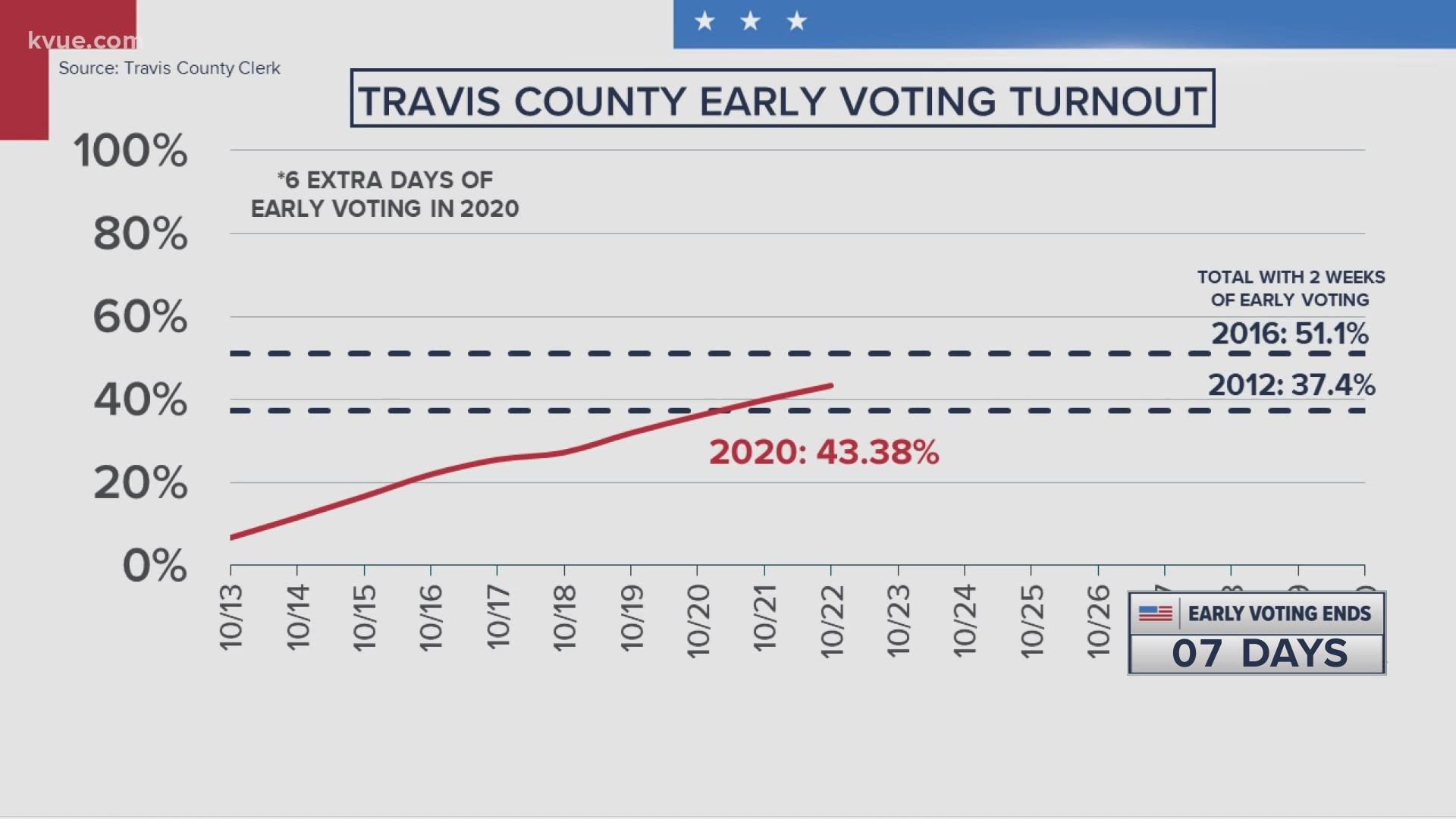 AUSTIN, Texas — Tens of thousands of Central Texans are showing up to polling places to vote early. For five out of the first seven days of early voting in Travis County, more than 31,000 people voted in person.

Here's a look at the Travis County early voting totals by day so far:

As of Thursday, more than 43% of registered voters in Travis County had cast a ballot, passing the two-week total for early voting in 2012. The 2016 early voting total sits at just over 51%.

At more than 850,000 registered voters this year, a record number of people registered to vote in Travis County, which may account, in part, for larger voter turnout and also plays into why the percentage isn't as high.

"I think if it was a traditional type of election where the candidates didn't instill so much emotion and political fervor, I think, I would be surprised," said David Thomason, an assistant professor in political science with St. Edward's University. "I think in terms of how any civic-minded person would view this – in a very positive way, in an optimistic way. We certainly see a lot of overall cynicism and pessimism with respect to the, to the bigger umbrella of politics in America. But I think this is something we can put a positive focus on."

Thomason has years of experience in campaigns and working with the legislature. He said local races could be another driving force for voter turnout this year.

"You know, you have Proposition A, Proposition B that I think are playing into this as well. A lot of voters, I think, may be voting on the top ticket, but down-ballot there are many important races that are also bringing people out," Thomason said.

And it's not just Travis County that is seeing large early voter turnout this year. On the first day of early voting in Williamson County, 22,707 people cast ballots. And on the second day, 21,951 people voted in person.

"So, it's a huge turnout and it's probably not going to let up more than just a little bit over time. And then we'll see another big crush of voters on Election Day, I suspect," Travis County Clerk Dana DeBeauvoir said. "I want to hear what the statistics say once they analyze this election because it would be great if people were paying more attention to down-ballot because those are the issues that more affect your pocketbook."

If you haven't voted yet, be sure to check out KVUE's voter guide, which covers everything you need to know about the 2020 election, including what will be on your ballot. Here's how to find early voting locations and where to check wait times. And check out the list of places you can get free food with an "I voted" sticker.

Once the polls close on Nov. 3, KVUE will keep track of the 2020 election results here. Mail-in ballots that are postmarked before Nov. 3 can be received by local elections offices by 5 p.m. the day after Election Day, so mail-in ballots in Texas are expected to take longer to tally.

Be sure to download KVUE's app to get updates as they come in: kvue.com/app. On the KVUE app, you can customize the type of content you would like to be notified about, including election and voting information. Find out how to customize KVUE's app here.

WATCH: Voting in Texas: What form of ID do you need to vote?

Round Rock police searching for kidnapping suspect; another suspect arrested