Jacksonville RNC Committee has nearly $840,000 leftover. Where is it going?

Last month, First Coast News reported that the city spent $391,602 – much of it in staff overtime –preparing for the event that never happened. 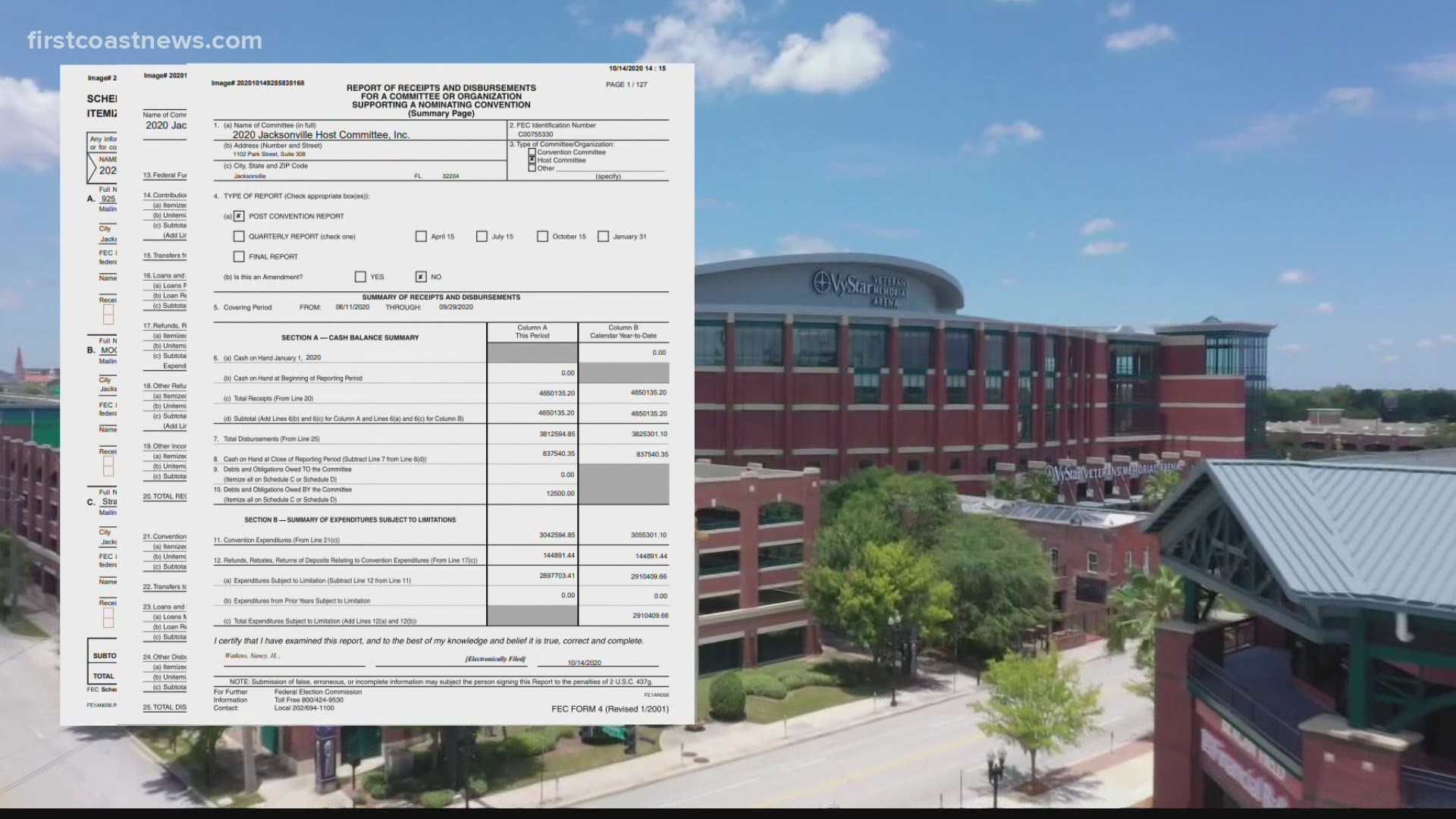 JACKSONVILLE, Fla — New documents show the local host committee raised millions in private donations in less than two months for the Republican National Convention in Jacksonville, and there are hundreds of thousands of dollars still left over as local lawmakers expressed concerns about what the canceled event cost the city.

From the beginning, taxpayers were told the event would cost them nothing.

“No taxpayer dollars. The RNC Host Committee is a nonprofit," Jacksonville Mayor Lenny Curry said several times during news conferences and in an interview with First Coast News at the end of July.

Although, after the RNC was canceled due to COVID-19, it became clear there were some expenses.

Last month, FCN reported that the city, including JEA, spent $391,602.68 – much of it in staff overtime –  preparing for the event that never happened.

A new filing now shows the RNC Host Committee has excess funds that were never spent.

“The committee –  they have not alerted the council," District 9 city council member Garrett Dennis said.

He hopes Curry will take the lead and use this money to help city agencies cover their tabs.

“He said read his lips: 'not a single dime of taxpayer dollars would be used or expended in order to bring the RNC here,'" Dennis said. “Now, we know that there's money available. Now, it's time for him to step up and say: 'you know what, I'm going to do the right thing.'”

We asked the mayor’s office Thursday afternoon what –  if any plans – they have to use host committee money to reimburse the city. City of Jacksonville Director of Public Affairs Nikki Kimbleton said they would respond to us Friday.

On Friday, the city's Chief of Staff Jordan Elsbury said, “The City and the 2020 Host Committee have been working together over the past couple of weeks to resolve any balances the City had. An invoice for $153,602 has been submitted for all COJ expenditures associated with hosting the convention, and we have been assured timely payment. We thank the Host Committee for being a great partner through this process.”

Our On Your Side team is still digging through these new documents, and will bring you more details on-air and online as we do.

New docs show the local host committee raised millions in private donations for the Republican National Convention in Jax, and there are hundreds of thousands of dollars still left over as local lawmakers expressed concerns about what the cancelled event cost the city. @FCN2go pic.twitter.com/bJvPovwqm9