"Jacksonville is being treated as the one group of chumps willing to take an event no one else wants," said a plaintiff in the lawsuit trying to block RNC.

JACKSONVILLE, Fla — A lawsuit filed Wednesday by seven Downtown Jacksonville residents and business owners is seeking to block the Republican National Convention from coming to the city.

Times-Union reporter Nate Monroe tweeted excerpts from the lawsuit, which was filed against City Hall, the RNC, President Trump's Campaign and the venue operator ASM Global.

The RNC is projected to bring thousands of people to the Vystar Veterans Memorial Arena, where the plaintiffs live and work. The lawsuit calls it "a nuisance injurious to the health, welfare and property rights of the Plaintiffs ... and the health and welfare of the community of Jacksonville ..." It notes the surrounding area is predominately African American, a community that has been disproportionately impacted by the COVID-19 pandemic.

“We’re being made guinea pigs,” plaintiff Tad Delegal said. His law office is just a short distance from the arena. “It is just startling that Jacksonville is being treated as the one group of chumps willing to take an event no one else wants … whose participants are so unconcerned about this pandemic that they refuse to listen to the previous city’s efforts to try to protect against it. I think it’s starling that we’re being used as the unwilling victims of a political effort to deny the reality of this pandemic.”

The lawsuit demands the arena remain closed to the event or limit the crowd size to 2,500 instead of the 15,000 capacity. And it asks that all attendees wear masks and remain six feet apart should the convention continue as planned.

The plaintiffs accuse President Trump of relocating the RNC to Jacksonville from North Carolina to "avoid compliance with COVID-19 health practices."

When asked for a comment, the Mayor's Office said, "We received a lawsuit late this afternoon. Our legal team is currently reviewing the documents."

This isn't the first time Mayor Lenny Curry has faced backlash regarding the RNC coming to Jacksonville. In June, 200 doctors signed an open letter to Curry, asking for the convention to be moved to a later date.

"Allowing this number of people to descend on Jacksonville is unequivocally provocative of disease, predictably harmful and medically disrespectful to the citizens of this city, much less the rest of the country," the letter said.

A few weeks later, Curry confirmed he is in self-quarantine after coming in contact with someone diagnosed with COVID-19.

President Trump has also suggested the GOP is still keeping its options open regarding a location for the convention should COVID-19 cases continue to spike. 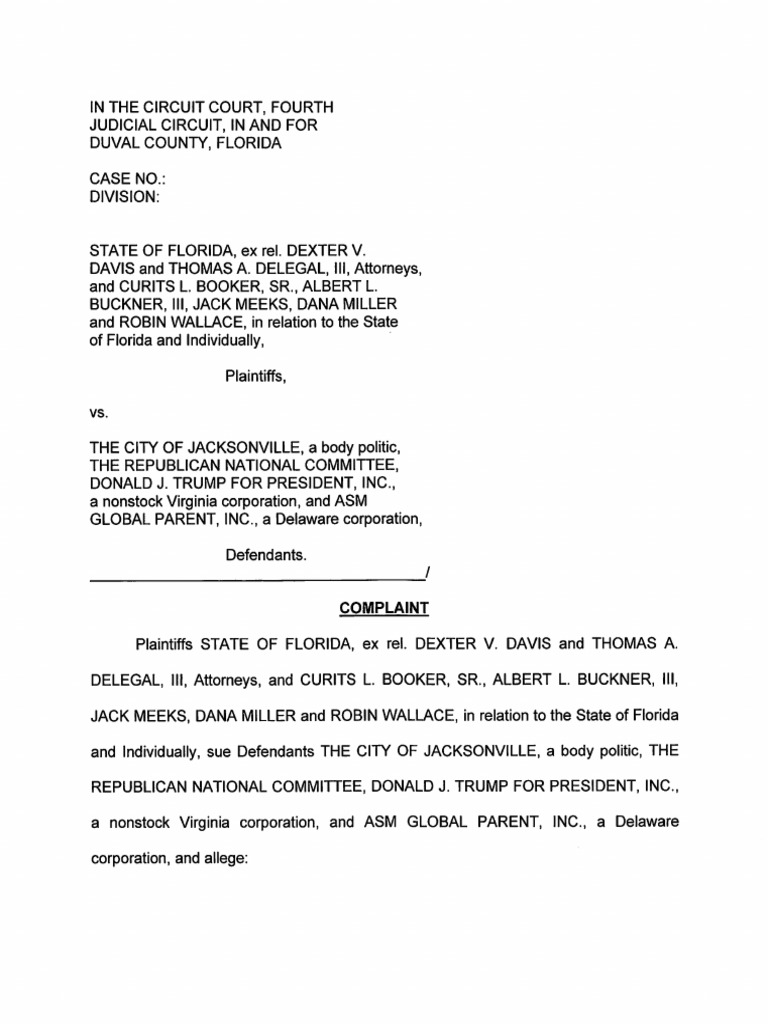