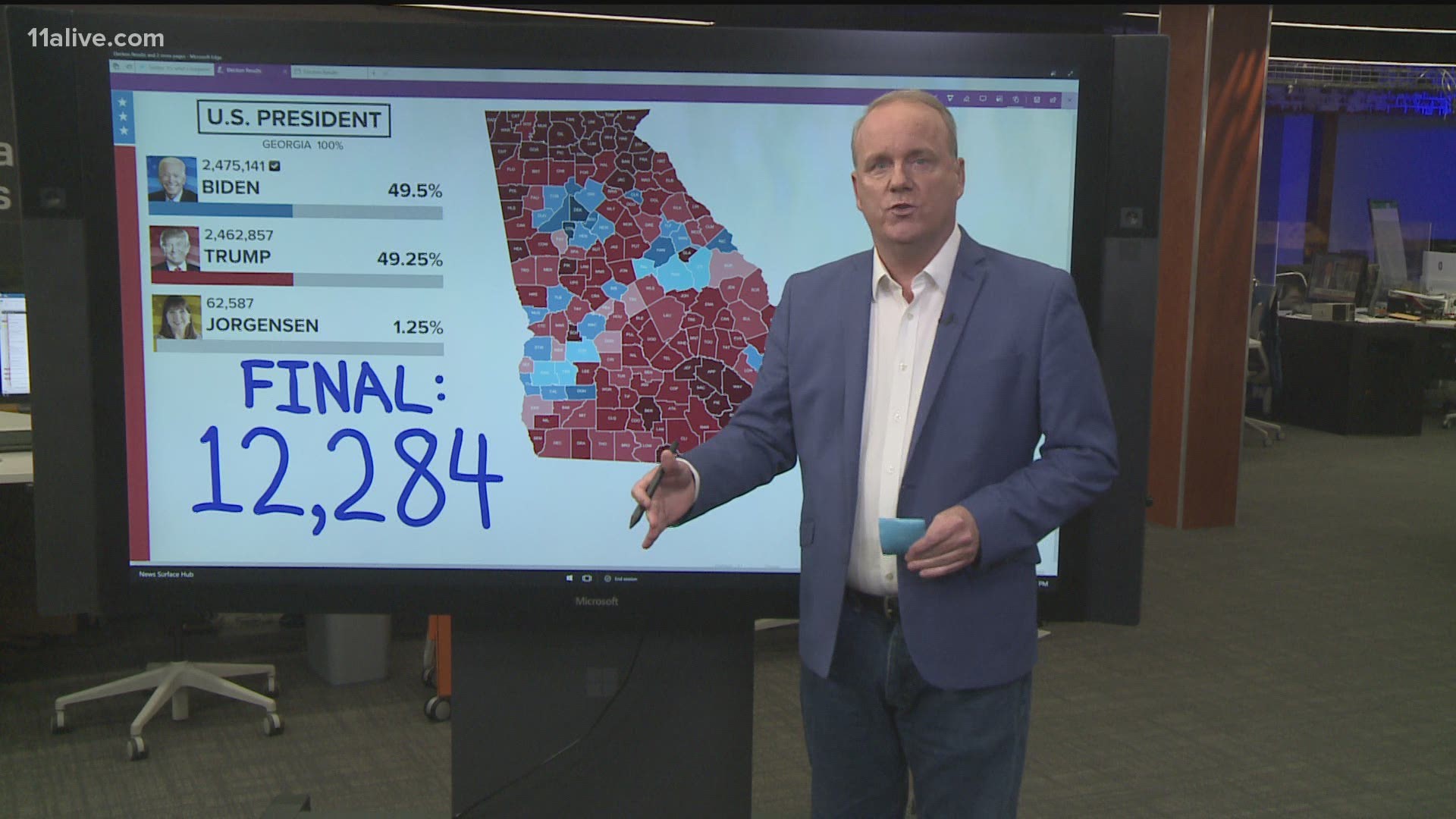 ATLANTA — The office of Georgia's Secretary of State Brad Raffensperger has completed the unprecedented hand-audit of ballots from the Nov. 3 presidential election between President Donald Trump and Democratic candidate Joe Biden.

In a release, the Secretary of State's Office said the results of the audit "upheld and reaffirmed" that the original machine count accurately portrayed the winner of the election, with Joe Biden winning the state with a final vote margin of 12,284 votes.

“This is a credit to the hard work of our county and local elections officials who moved quickly to undertake and complete such a momentous task in a short period of time," Raffensperger said.

The audit itself is a process where workers in each of the state's 159 counties physically looked at each of the paper ballots cast during the election.

Nearly all of the ballots were already counted by electronic scanners following the election.

The audit is intended to be an acid test for the state's new voting system with new voting machines that were used statewide for the first time in 2020.

Last week, the state's voting implementation director, Gabriel Sterling, said the idea was to show that the ballots were scanned properly by the computerized equipment.

"The main thing we're trying to do is show the equipment scanned the ballots properly, and the counts we got were the right counts," Sterling said last week. "And the (paper) ballots we have are the backup trail to that."

In the new voting system, voters are required to select a candidate on a computer screen. After voters complete the voting process, a printer attached to the machine prints a paper ballot that includes the voter's choices and a QR code. The voter takes that paper ballot and inserts it into a scanner, which reads the QR code.

The information from the QR code is what is counted.

The deadline for each of the state's counties to complete their hand audit was at midnight on Wednesday.

The Secretary of State's office has a hard-and-fast deadline to certify the statewide results of Friday.

The main issues uncovered over the course of the audit process came primarily from four counties according to the Secretary of State's office:

The audit is not considered an official recount, which would be done by machines.

After the state's votes are certified, a candidate can request a recount if the margin between that candidate and their opponent is within a 0.5% margin.

Candidates will have until Tuesday, Nov. 24, 2020, to make a formal request for a recount.