'Oh my god, am I safe?' Florida voters receive threatening emails, local officials preparing for voter intimidation at the polls

'When you first read that somebody has your address, and they would like to come after you. At first I was like 'Oh my god, Am I safe?'' 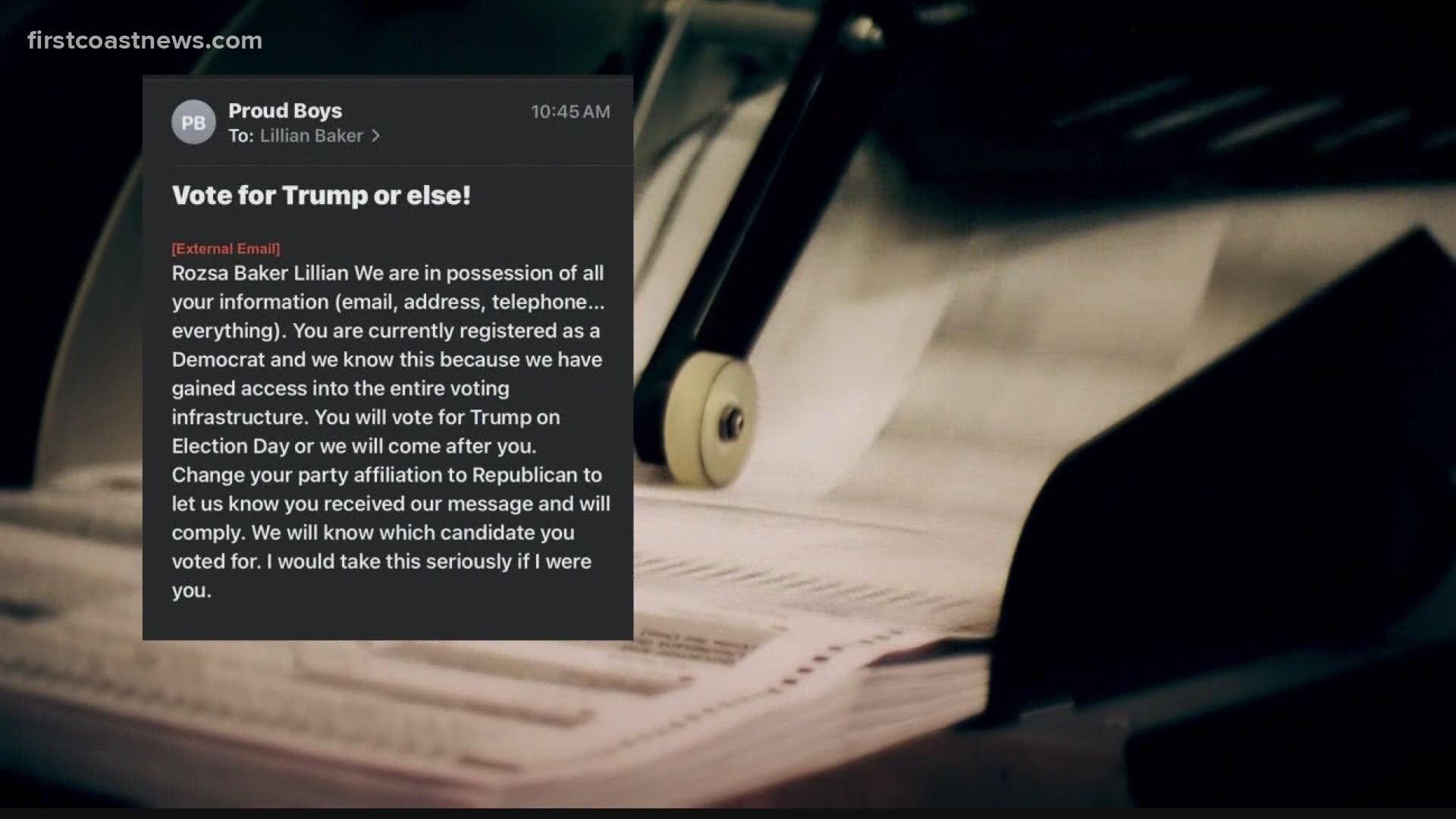 “I felt kind of invaded," University of Florida law student Emily Greentree said. "When you first read that somebody has your address, and they would like to come after you. At first I was like 'Oh my god, am I safe?'”

“I was confused, and I was surprised. I have never received anything close to this," Rozsa explained.

In an email the two students received, the sender claims to have personal information about them and directs them to vote in a certain way, or “we will come after you.” (For reference: the entire state voter file is available to any member of the public, but who a person votes for is strictly anonymous.)

The emails claim to be from the Proud Boys, a white nationalist group. In a news conference Wednesday, the FBI mentioned that some emails sent to voters are linked to overseas servers, but did not mention these emails specifically.

Voter intimidation, a violation of federal law, doesn’t just happen over the internet. There's a chance it could happen at the voter polls, and local election officials say they’re prepared for it.

St. Johns County Supervisor of Elections Vicky Oakes said her team has been working closely with law enforcement since March. She extra patrols – aside from the poll deputy – are near early voting sites in case a threat arises.

"Holding a safe and secure election is always one of Clay County’s top priorities, which is emphasized through our Election Worker training. We also maintain a strong working relationship with Clay County Sheriff’s office, and with their continued support, are confident that we are prepared for the duration of Early Voting and for Election Day."

Duval County Supervisor of Elections Mike Hogan said his team is also prepared for voter intimidation, but can’t release information on how they would execute their plan.

It’s also important to remember, campaigners can come up to you if it’s outside, 150 feet from the polling entrance.

“I'm a law student. I know my rights, but a lot of regular citizens don't. It's quite possible, and probably probable, that somebody receives this email and is actually doubting whether or not they should vote because of their safety or their family's safety," Rozsa explained. "And that to me is a really disappointing and sad thing. It's turning our democracy – our electoral process –  into something completely different.”

Rozsa said she reported the email she got Tuesday to the local supervisor of elections and different law enforcement agencies. She plans to early vote on Friday.

"Though the FBI’s standard practice is to neither confirm nor deny any investigation, we take all election-related threats seriously whether it is vote fraud, voter suppression, or threats from cyber or foreign influence actors. The FBI Jacksonville Division is committed to supporting our election security partners throughout the state of Florida, and protecting our communities as Americans exercise their right to vote. Help from the public is also vital to our effort. We encourage members of the public to remain vigilant and immediately report any suspicious, election-related activity to their local FBI field office or online at tips.fbi.gov. To learn more about federal election crimes visit www.fbi.gov/elections, and for tips and best practices to protect digital devices, social media accounts, private information and more visit www.fbi.gov/protectedvoices."

Voters can also report intimidation to the Election Protection Hotline at 1-866-OUR-VOTE or 1-888-VE-Y-VOTA (en Español).

I spoke to two UF law students tonight who received threatening emails directing them to vote a certain way.

What the emails said, and breaking news update from the FBI right now on @FCN2go at 11. pic.twitter.com/xW8YCXBwQg