Supporters of the president are calling it #SuitcaseGate on social media. However, they are not suitcases. 11Alive confirmed they're the standard ballot containers. 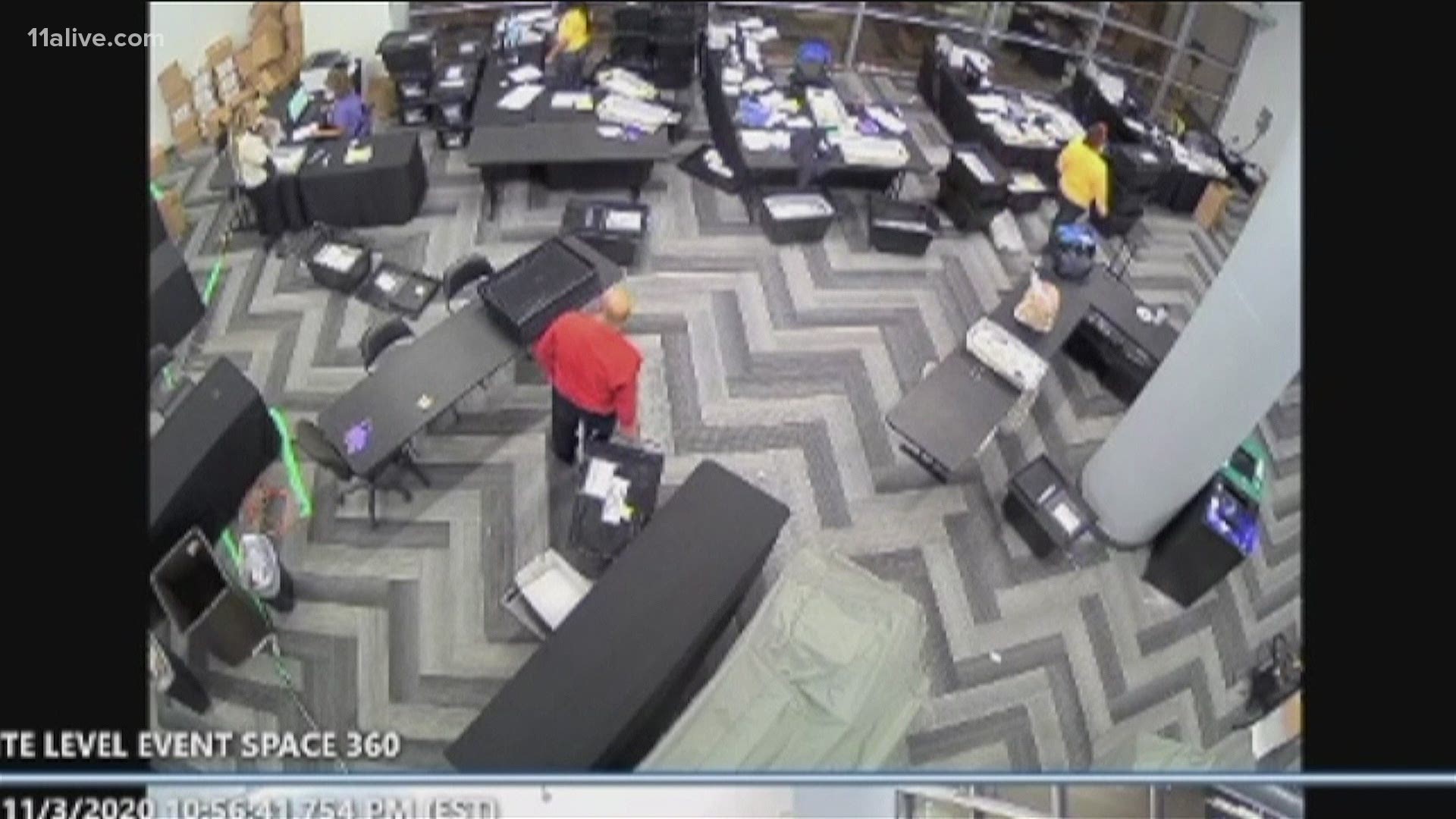 ATLANTA — President Donald Trump's team is pointing to newly released surveillance video from State Farm Arena as evidence of election fraud. 11Alive is taking a look at the video and the claims to separate fact from fiction.

The video was shown Thursday in the State Senate Hearing, but state investigators confirm they've had it for weeks and determined Fulton County was legally county ballots. There is more to the story, however.

"Yeah, I saw four suitcases come out from underneath the table," said Jackie Pick, a Trump Attorney.

"I'm going to call it a suitcase," Pick said.

Supporters of the president are calling it #SuitcaseGate on social media.

However, they are not suitcases. 11Alive confirmed they're the standard ballot containers used by Fulton County.

"What the video shows is that they have pulled out plastic bins from underneath the desks. Those are bins that they keep under their desks near the scanners," said Richard Barron, Fulton County's elections director.

A Democratic senator mentioned during the hearing that this has been investigated already. Here is part of that exchange with Pick.

Senator: They've investigated repeatedly, that they had a monitor on-site the entire time, that this whole thing has been debunked for weeks by our Secretary of State's Office.

Pick: Your officials need to watch the video.

11Alive learned that they did watch the video, which is not new. State investigators reviewed the State Farm surveillance tapes weeks ago.

State Farm #suitcasegate video:
• Water leak & counting happened on 2 different nights
• NOT #Suitcase. Standard ballot containers
• Press & monitors told counting done for the night
• No one was told/forced to leave
• Notice should have been given of ongoing counting pic.twitter.com/O0VTZa8Mii

Gabriel Sterling with the Secretary of State's Office tweeted "the 90 second video of election workers purporting to show fraud was watched in its entirety (hours)  by @GaSecofState investigators. Shows normal ballot processing."

"The press reported that there was like a supposed water main break, or pipe break or whatever, and this was an excuse for people clearing out of State Farm," Pick said at the hearing.

The water pipe leak and the events on the surveillance video did not happen on the same night. Those two events occurred 17 hours apart.

RELATED: Fact-checking | President Trump singles out Georgia in list of states he claims he won by large margin

The workers leaving were those who opened the ballot envelopes. Once they were done processing that batch they went home.

"At about 10, there was one person working the polls who told everyone in the room to leave," Pick said.

"They began letting certain people go. No announcement was ever made to leave, for anyone to leave," Barron said.

Republican monitors claim they were forced out.

However, both 11Alive journalists on site that night independently confirmed that they were not told to leave, but they were told counting was done for the night.

"Why are they only counting them whenever the place is cleared out with no witnesses," Pick asked.

11Alive was able to determine that this part is true. The media and the party monitors were not given notice that counting would continue into the early morning hours and they should have been.

The Secretary of State's Office said one of its monitors was present. The counting of those heavily-Democratic absentee ballots did result in a big batch of numbers coming from Fulton County in the 1 a.m. am hour on election night.

The spike in the numbers has led Trump supporters to conclude that Joe Biden took the lead because of it - however, that's not true.

Biden was already leading Fulton County before those absentee ballots were counted and he did not take the lead in Georgia until days later.