Duval risks undoing vote counts if board violates Sunshine Laws: 'This is the beginning of Florida delaying the election results'

The board came under fire last week when it said observers would not be allowed to object to its decisions, the public couldn't photograph or videotape the meetings. 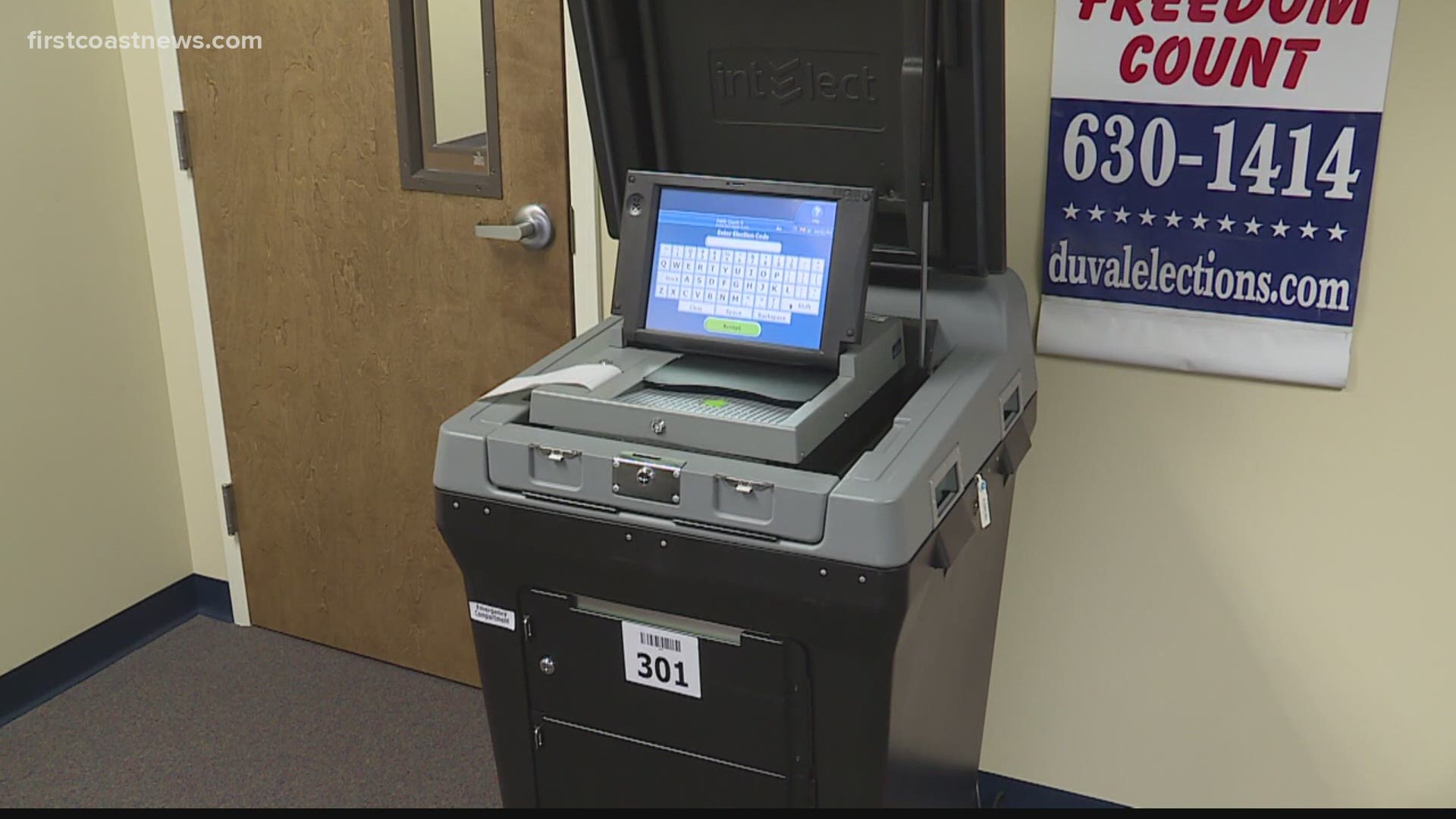 The Duval County Canvassing Board, which processes and counts election ballots, runs the risk of having all of its work undone if it continues violating Florida's Sunshine Law, First Amendment experts say, potentially delaying Florida's election results.

The board came under fire last week when it said observers would not be allowed to object to its decisions, the public couldn't photograph or videotape the meetings and it would not live-stream the meetings.

On Tuesday, the Canvassing Board made a partial reversal, at least establishing a partial live-stream as it attempted to determine voters' intent on mail ballots.

Yet the Board continued to restrain the public from taking photographs, shooting videos or lodging objections to its rulings. Florida law requires that board meetings allow non-disruptive photography and video-recording.

If a court were to rule the board is violating the state's Sunshine Law, then it could invalidate everything it has done and require re-doing the work of curing mail ballots that were rejected by machines, even as the Nov. 3 general election looms closer.

"The risk, really, is that this is the beginning of Florida delaying the election results," said Pamela Marsh, president of the Florida First Amendment Foundation. "If this has to go to court, get a court decision, go back, adopt better rules, go through all those ballots they’ve already gone through, we’re talking already delaying election results and Florida again causing anxiety about who’s been elected president."

Ed Birk, a First Amendment lawyer representing WJXT TV-4, agreed that the board is taking a risk by continuing with prior restraints against the public.

Tuesday the board yielded only on allowing a video live stream, yet it still said it would not record the meetings. Others, it said, could try to record the Zoom webinar, but it was not going to post the stream to Facebook where it would automatically be recorded and published or record it itself because doing so, argued attorney Jason Teal, would be overly burdensome for elections staff.

Teal, an assistant general counsel for the city, has offered little legal rationale for why the board has issued a prior restraint against the media and public.

When asked what right he had to do so, he pointed to a public records law, even though a separate law deals with Florida's requirements that board meetings be open. Florida courts have ruled that boards cannot ban non-disruptive recording or photography of meetings.

Teal argued that this didn't have to do with records law, but was instead a "strong policy issue" to protect a secret ballot, and if someone puts their name on a ballot, even if the law only exempts signatures and not names, then the board has an interest in keeping the ballot secret by banning photography. In Florida, ballots are public records.

The law allows elections supervisors, at their discretion, to choose whether they redact signatures from voting records, but Duval County Elections Supervisor Mike Hogan said he could also redact printed names and initials, even though the law doesn't say that.

"I don’t think you have a reasonable expectation of privacy if you then put your name on the ballot," she said.

The meetings, she said, must be public. "It’s public because under our Florida constitution the presumption is it’s public. There has to be a specific exemption that it’s not public."

She continued, "I’m not sure where they say there is any legal distinction between Zoom broadcasting a meeting and prohibiting recording the exact same meeting. The cat’s out of the bag."

Florida law says that for any board's action to be binding, it must occur at a meeting that is fully public. Mansfield said a judge ruling on this would have to order the board to re-do its vote counting.

Each member of the three-person canvassing board said they should not be blamed for the decision to limit access to the meetings, even as they refused to change the rules.

Acting chairman Brent Shore, a senior judge who had previously banned photography in his courtroom before reversing himself, said that since the initial rules were put into place by County Judge Gary Flower, it's unfair to criticize him, even though Shore last week and this week refused to change the rules.

"I had nothing to do with promulgating these rules, even though there's a narrative I did," said Shore, who dismissed efforts to change the rules, saying if he did so, then he would have to "babysit" journalists.

Hogan said the rule changes at an Oct. 9 meeting where he voted to approve the them were "a surprise to me," even though the Office of General Counsel drafted the rule adjustments ahead of time.

Boylan wasn't present for that meeting, but City Councilwoman Joyce Morgan was there in his place. "I'm a little frustrated to be a party to that [rule change], being painted with that," Boylan said, even though Boylan also did not support lifting the prior restraint.

Boylan, the former leader of WJCT, said he supports "full transparency," but he also said he trusts attorney Teal's judgment.

The board's rules have drawn widespread condemnation, from fellow Republicans, from Democrats, from First Amendment organizations and from lawyers.

Some of the rationales from the board don't make sense. Hogan said there was no distinction between the words "confidential" and "exempt" in Florida records law, even though that's not true.

Birk said Tuesday the two were not the same, and Teal acknowledged the board has discretion when it comes to releasing exempt records, even though last week he told the board it could be sued if it released exempt records.

The Florida courts have ruled that the public has the right to record and photograph board meetings as long as it is not disruptive.

Teal refused when asked to explain why the case law didn't apply here.

The courts have also ruled discussion at public meetings must be audible, yet the Zoom broadcast, according to listeners, was not audible. TV news reporters had asked to use microphones on or near the Canvassing Board, but Shore rejected those requests.

WJXT TV-4 reporter Jim Piggott also pointed out that the Zoom broadcast only showed the original ballot, but the Canvassing Board wasn't showing the corrected ballot where a staffer re-did the ballot so it could be accepted by a voting machine.

Robert Phillips, the office's chief elections assistant, said he didn't think the public cared about the corrected ballot that would go into the machine since Democratic and Republican lawyers were in the room to watch him re-make the ballot.

In the past, courts have ruled that the city, advised by the Office of General Counsel, had violated the state's Sunshine laws, and courts have invalidated work done at meetings and forced the city to hold "cure" meetings, re-doing the work. If that happened here, the Canvassing Board could be forced to re-process mail ballots later than anticipated.

The Duval Democratic Party hired court reporters to make transcripts of the meetings. The Canvassing Board is required to keep meeting minutes and to post notices of meetings ahead of time.

Even though the board had asked the Office of General Counsel to draft the rules before the Oct. 9 meeting, there was nothing in the public notice that would have indicated those rules were going to be voted on. The notice only said the meeting was for "logic and accuracy testing of the voting machines." After that testing, media members, candidates and party representatives left the room, and only after the room was largely empty did the board bring up the rule changes.

Leslie Goller, an attorney for the Duval Democratic Party, was the only observer still attending, and she objected to the changes, including those that limited the right of candidates to attend canvassing board meetings if there are too many people who want to attend.

Marsh said that Oct. 9 meeting wasn't handled appropriately, and that meeting, too, needs to be re-done.

"They’re going to lose the trust of the community," she said. "This canvassing board loses the trust of the people who are voting, who feel like their votes should matter, and that undermines their faith in free and fair elections. The lack of transparency leads to distrust, which leads to doubt in election results.

"This is where it starts," Marsh continued. "You lose the trust of the people when you act in ways that don’t value public participation, don’t value freedom of the press, the importance of the press in getting information to people about how their votes are treated and handled."

Brad Ashwell, Florida director for All Voting is Local, said Hogan has been particularly problematic all election cycle.

Ashwell said that he and others tried for months to meet with Hogan before the election. Finally, weeks ago, Hogan met with them, but Ashwell said the supervisor said it was too late to do most of what they wanted.

"We like to resolve issues before they become lawsuits," Ashwell said. "The canvass, the lack of transparency over the canvass has been the latest chapter in an ongoing series of events that have garnered our attention in the way he runs elections. It's deeply concerning."

He continued, "At a time when it’s really critical that every elected official makes sure voters have confidence in this election whatever the outcome is. He’s doing the exact opposite. He’s taking a process already little known but at a time when record numbers of voters vote by mail, he’s making the process secretive and difficult to monitor."

Ashwell praised Hogan's predecessor, Republican Jerry Holland, as someone who was easy to work with.

"He not only was accessible, which is the polar opposite of Mike Hogan, he also would respond," Ashwell said. "He’d consider proposals and feedback, which is not what Mike Hogan is doing."

By Nov. 15, canvassing boards have to send their vote results to the state.

"I think he needs to worry more. I feel like that is his M.O. He doesn’t seem like he worries," Ashwell said. "At a time where everybody is trying to speculate about people’s intentions, I don’t think he’s trying to put his finger on the scale."