The two met for a socially distant debate, their podiums spaced eight feet apart. It's the first and only debate of the race. 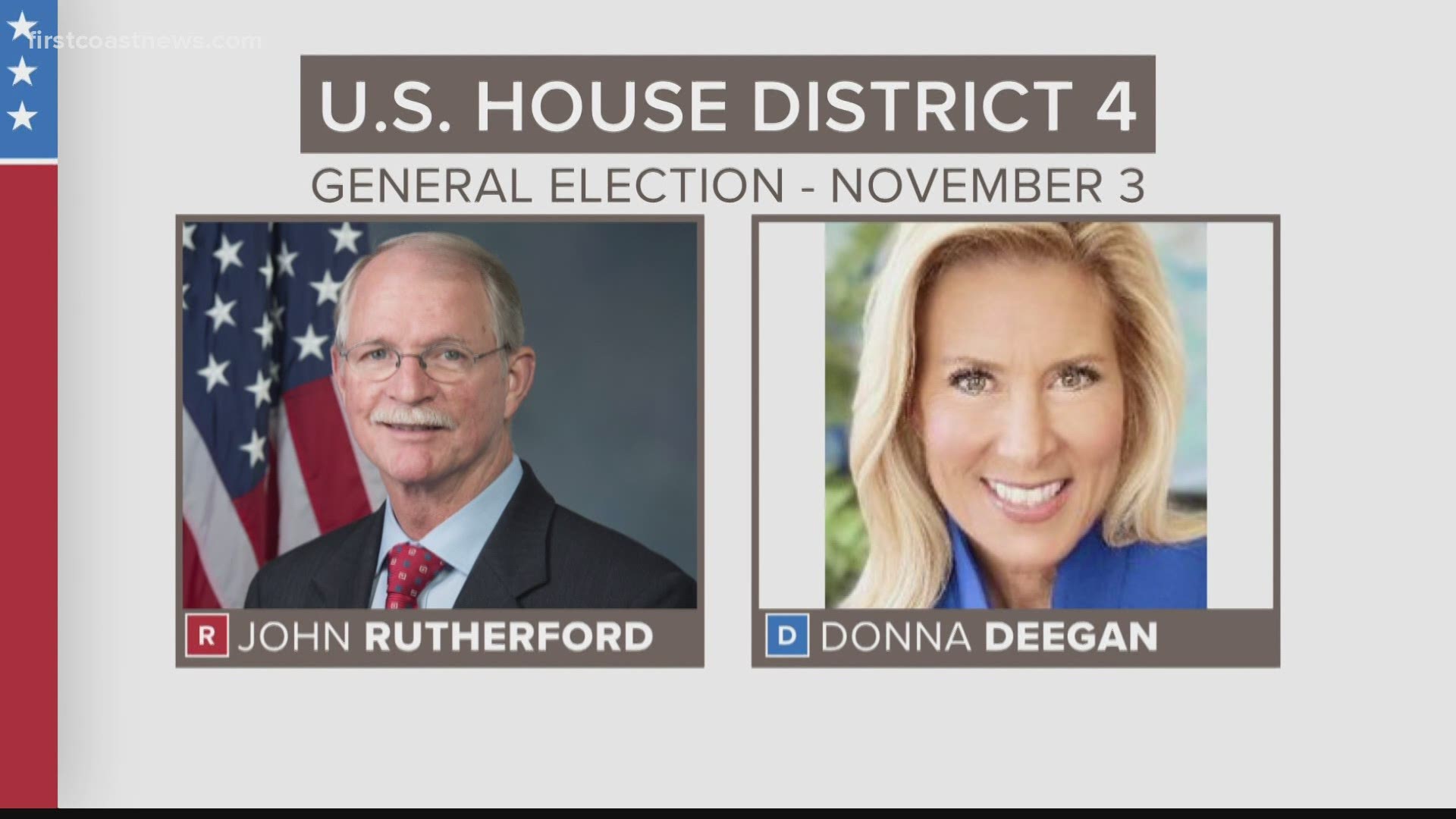 JACKSONVILLE, Fla — Wednesday night, the two candidates running for the fourth congressional district seat in Florida faced off in the first and only debate. Incumbent Republican Congressman John Rutherford is running against Democrat Donna Deegan.

Some may know, Donna Deegan is a former news anchor at First Coast News, and her husband, Time Deegan, is FCN's chief meteorologist.

Both candidates are prominent people on the First Coast. Congressman Rutherford served as the sheriff of Jacksonville for 12 years. Donna Deegan is a former news anchor and the founder of The DONNA Marathon to benefit breast cancer.

The candidates stood eight feet apart on the stage, and were screened for COVID-19 symptoms before the debate. They discussed a variety of topics, ranging from healthcare, to social justice to COVID-19.

Healthcare has been a hallmark issue for Deegan, a three-time cancer survivor who started a foundation to provide financial help to those with breast cancer. Outlining her healthcare plan, Deegan said all will be covered for preexisting conditions, she'd make sure insurance companies couldn't raise rates on those with preexisting conditions, she'd build on the affordable care act and negotiate the price of drugs with drug companies.

“If we don’t have a healthy population, we don’t have a workforce that is productive everything sort of comes back to healthcare," Deegan told First Coast News after the debate.

As for Rutherford, he focused on bringing back jobs and the economy after COVID-19. He said first we have to get the virus under control, which he said he thinks the Federal Government's Operation Warp Speed is helping do, specifically with testing. Rutherford said he is confident we will have a vaccine by early next year for COVID-19.

Rutherford also discussed his time in law enforcement, and social justice. He has called the Black Lives Matter movement a hate group in the past and again Wednesday referred to it as a Marxist organization.

"I'm not talking about every individual out there wearing a Black Lives Matter T-shirt. They probably don't know what the organization stands for, but I went to their website. You can go to their website," Rutherford told FCN after the debate.

He also told FCN after the debate, everyone, law enforcement included, has to work together to fight social injustices.

“I spent my entire life as a law enforcement officer fighting racial and social injustice, and when I say that when I reject the narrative that America is a racist country, and I reject the narrative that somehow our institutions are systemically racist, that America is a bad place, that we have bad founders, it doesn’t mean that racial injustice and social injustice incidents don’t occur," Rutherford said. "When they do, we certainly cannot turn a blind eye or a deaf ear. We have to do something about that."

When it comes to Rutherford's healthcare plan, he said he'll cover preexisting conditions, and let people stay on their parents' healthcare plans until they're 26-years-old. Rutherford also said he doesn't think the Affordable Care Act is affordable for all, saying, his plan is much better than what we have, but didn't go in-depth about the details behind that.

Deegan shot back, saying Rutherford doesn't have a healthcare plan.

"Saying you have a healthcare plan, saying people will be covered for preexisting conditions is not the same as covering them because there have to be provisions for how that will happen. You have to make that clear," Deegan said.

Both candidates said they do not support Medicare for all. They also agreed that there needs to be less divisiveness in politics, and politicians need to reach across the aisle to get things done.

Deegan said she doesn't support Barrett's nomination happening before the election, while Rutherford does.

Both Rutherford and Deegan said they don't support the Green New Deal, but said there needs to be a lot more done to help the environment. This district includes three coastal communities all starting to feel the impacts of climate change.

In his closing statements, Rutherford said his heart goes out to the loved ones of all Americans who have died due to COVID-19 and said he will hold China accountable for the virus. He said he will restore the district to what it was before COVID-19.

Deegan reiterated her stance on healthcare and said she will fight for the public. She discussed the town halls she has held all over the district. She said instead of division, we need to choose love and unity.

In a pretty red district, Dr. Mike Binder, Associate Professor of Political Science at the University of North Florida, said the latest poll out from UNF last week has Deegan trailing Rutherford by 19 points.

"It’s a monumental climb for a Democrat to win this district and absent something absolutely crazy happening, but it is 2020 so anything could happen, but I would expect Rutherford to relatively easily win reelection," Binder said.

"I would just say that poll was taken right around the time that we first started running our commercials, so we've really gotten out there in a way that most people have probably seen the campaign by now," Deegan said.

"Listen, I didn't get into this race because I thought it would be easy. I got into it because there are so many people who are vulnerable whose voices are not being heard," she said.