The sign has since been taken down and Arby's says they have disciplined the manager and the team at the Elk River location. 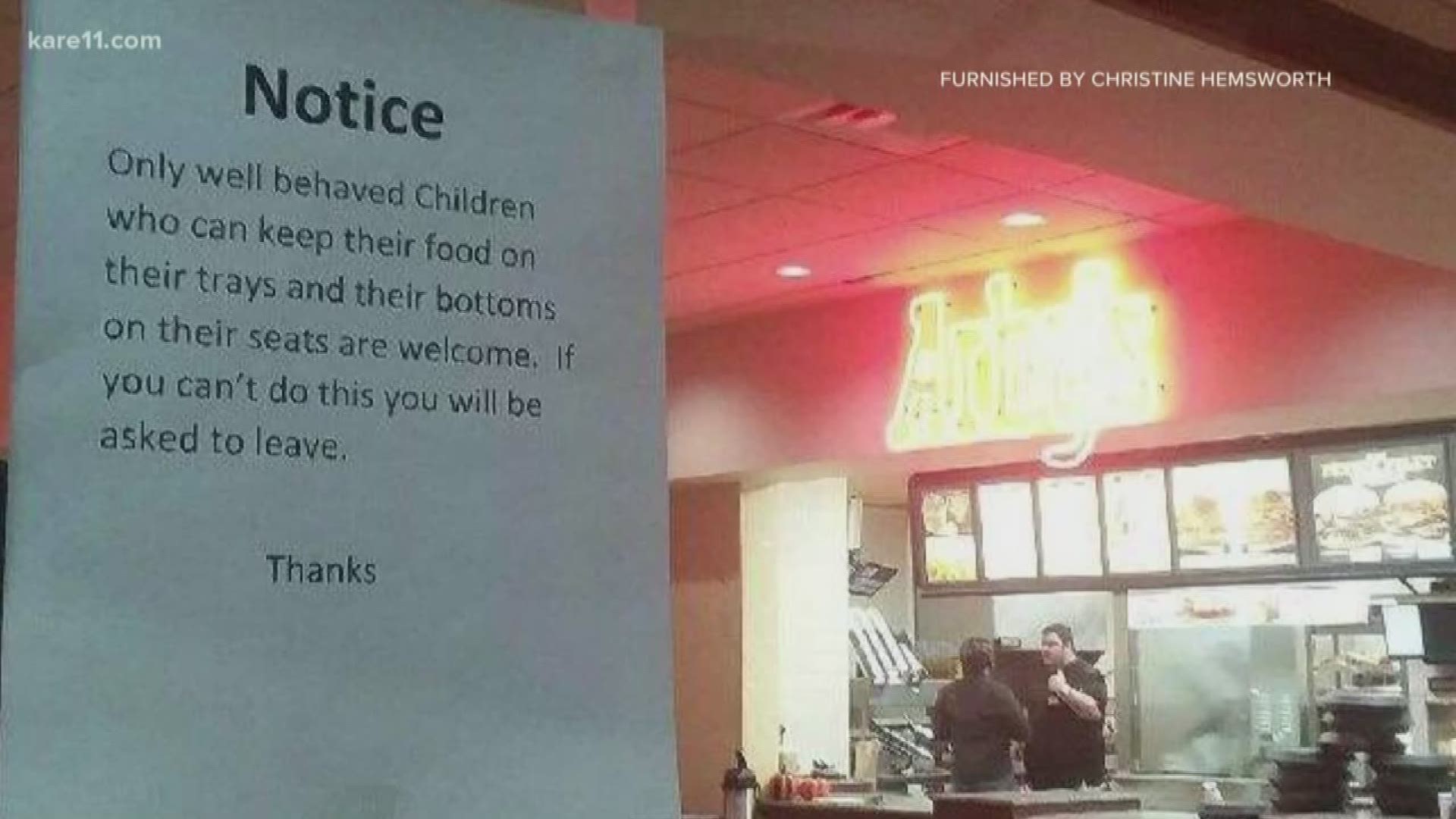 ELK RIVER, Minn. — Wednesday night, Christine Hemsworth said she walked into the Elk River Arby's for dinner with her two sons and daughter.

On their way in, she said she noticed a sign on the door.

"Notice: Only well behaved children who can keep their food on their trays and their bottoms on their seats are welcome. If you can't do this you will be asked to leave. Thanks"

"I was like 'oh gosh,'" Hemsworth said. "I've got a two-year-old with me and he doesn't always keep his fries on the tray or his bottom on the seat. He sometimes stands up."

She said she still walked in with her family to order food. She also said she got her food without a problem and sat down to eat. Dinner went as planned.

"It was kind of uncomfortable in the restaurant the time we were there," Hemsworth said. "I have a toddler. I wasn't sure if it was because they didn't want to clean up messes. I always clean up my children's mess anyways but it was an uncomfortable and stressful meal."

Hemsworth said she has been to the Elk River Arby's several times but it's the first time she has seen a sign like the one she saw.

"I was shocked to find a sign like that," she said. "It is a fast food restaurant, it's not something with white tablecloths. It's supposed to be family-oriented as far as I knew."

Community members brought to our attention that the sign at Arby's might have been a response to "unruly teenagers" in the area. We have reached out to the Elk River Police Department and Chief Ron Nierenhausen did confirm that his officers responded to Arby's four times since May of 2019. He said the calls involved juveniles being "loud and obnoxious," but none of the calls was serious in nature. None of the calls resulted in arrests.

KARE 11 reached out to Arby's corporate for a comment about the notice. They sent this statement in reply:

“We recognize the language on this sign was insensitive. We removed it quickly, and have disciplined the manager and team working at the restaurant. It does not reflect our company values and the family-friendly environment we aim to provide in all of our restaurants.”

MORE #BTN11: Help support your favorite causes in MN through 'Give to the Max Day'