"She told me one time she had dynamite in a picnic basket, and she ended up sitting next to a Nazi office. She was scared to death." 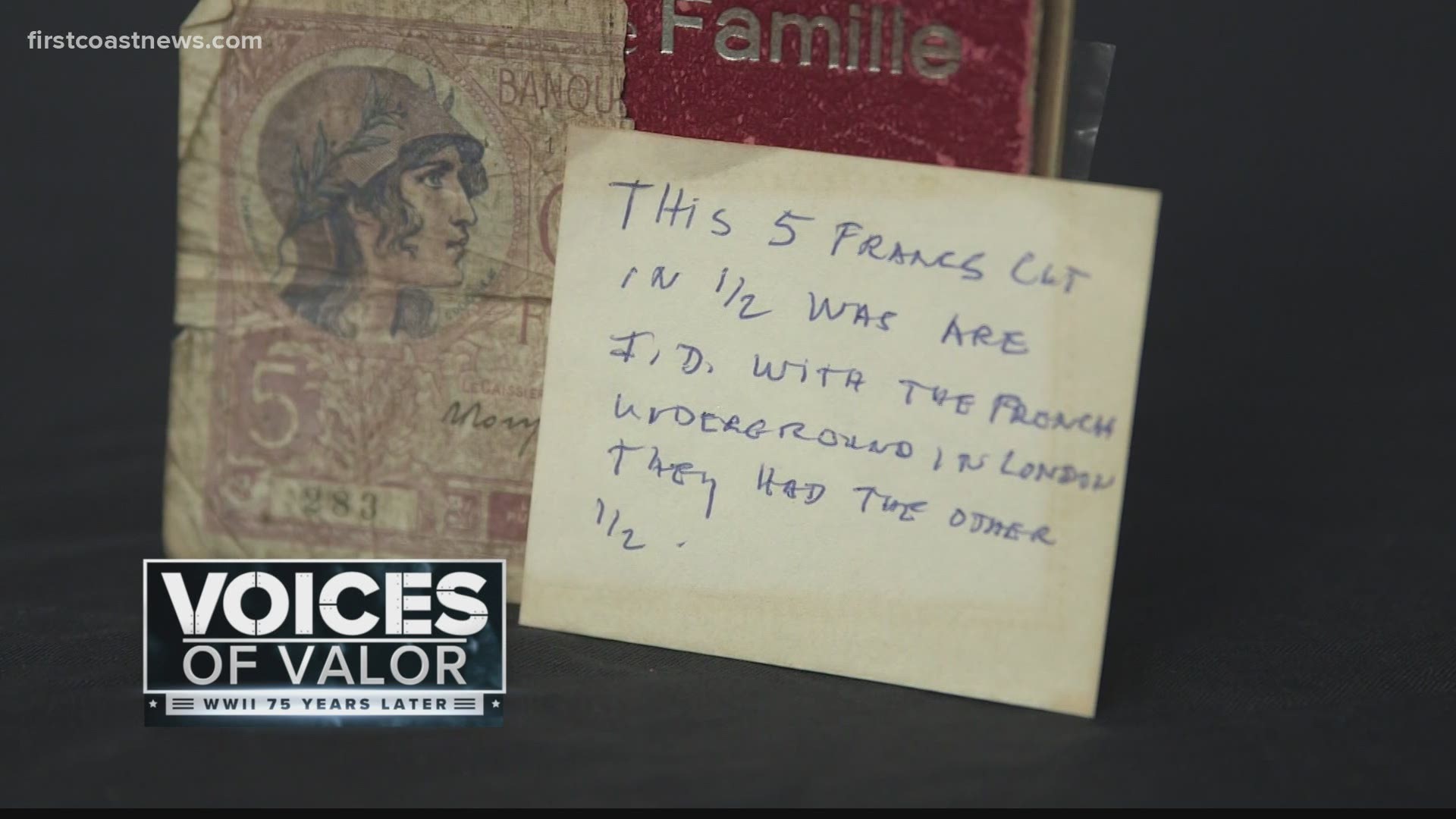 JACKSONVILLE, Fla. — Simone de Cruzel was a 19-year-old woman living in France during the Nazi Occupation in World War II. However, the brave woman made the decision to fight back with the French Resistance.

"She was a spy. She was a spy," Simone's son Jerry Stalnaker said. "In order to track her they took a 5 franc and ripped it in half. Her serial number was 283. And the other half was kept in England. That's how they kept track of her."

"She told me one time she had dynamite in a picnic basket, and she ended up sitting next to a Nazi officer," Stalnaker said. "She was scared to death."

"Eventually, they arrested her and put her on death row. So scary because every day they'd call out the names of prisoners who'd be killed that day," Stalnaker continued. "She had to watch her friends be tortured."

He explained that perhaps her life was spared because she was able to work as a nurse and care for German soldiers.

The Americans would eventually bomb the prison where she was held, and the world ended shortly afterward.

"She met my dad. They got married. And I was born in Paris," Stalnaker said.
"[It's an] incredible story. It needs to be a movie."

Stalnaker's dad has quite the WWII story, as well.

His B-26 plane went down not long after D-Day in occupied France. A French boy raced on his bicycle to the site where he saw a parachute go down. The boy reached the man before the Nazis did.

Then, a rural French family helped disguise him as a peasant and hid him in a barn. The family told him to remove everything American and not to say a word when the Nazi soldiers were around.

The trouble was that his disguise was so effective, no Americans thought to rescue him.

However, he had sewn his ring from West Point into his pants. One day, a military grad of West Point happened to be nearby, and when George Stalnaker showed his own West Point ring, he was rescued.

The story of Jerry Stalnaker's parents is told in "The Untold Story of George and Simone Stalnaker" by Len Sandler.

It is quite the tale of bravery and service during WWII.  As a proud pilot from the Vietnam War, Jerry Stalnaker is hoping more people will share the courage of what our Greatest Generation did to grab freedom back from Hitler and the Nazis.

The Stalnakers' story is part of First Coast News' Voices of Valor, a look at the veterans who served our country in WWII.  Voices of Valor marks 2020, the 75th Anniversary of the end of WWII.