The ceremony officially added two names on the granite that honors more than 1,700 service members with Jacksonville connections. 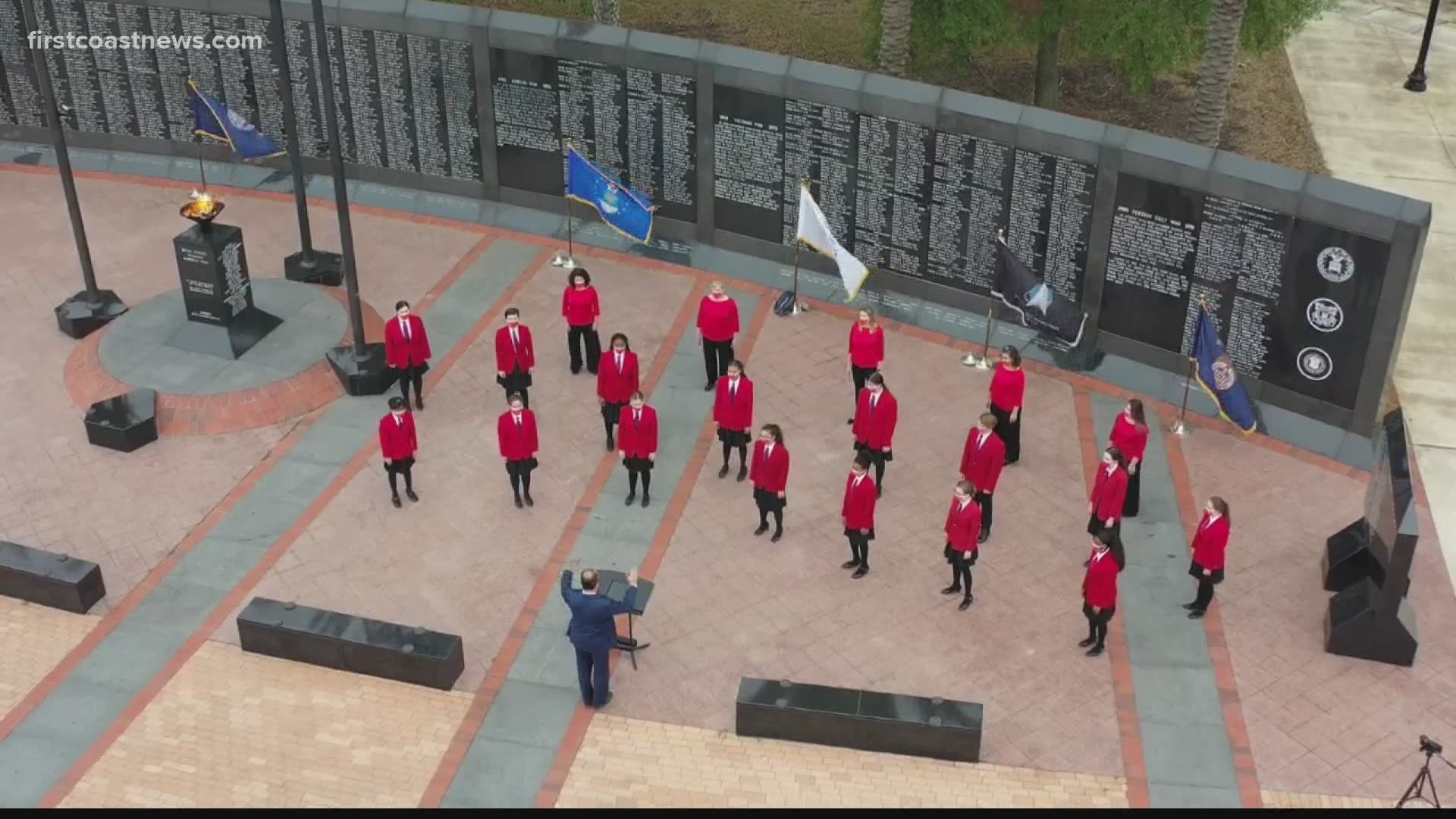 JACKSONVILLE, Fla. — Even during a global pandemic that turned everyday life upside down, the eternal flame kept burning at the Jacksonville Veterans Memorial Wall honoring those who died while serving in the military.

It burned Monday on Memorial Day at the wall and also in a 30-minute video produced by the city of Jacksonville as it conducted a virtual ceremony for the second year in a row because of COVID-19 health precautions.

The video became available for viewing at 8 a.m. Monday on social media and the city's Youtube channel. The video sought to provide the mix of music and testimonials that traditionally make up the observance that attracted several thousand people before COVID-19.

U.S. Navy Capt. Darren Stennett, region chaplain for Navy Region Southeast, drew a connection between Jacksonville's black granite memorial wall with another war memorial "on the snow-capped Himalayas" bearing the famous epitaph about those who sacrificed their tomorrows so others could have their todays.

“Almighty God, like that small plaque, this sacred wall compels us to pause to remember and to honor those brave warriors and others like them who have given all of their tomorrows for the ideals of our great nation – the ideals of liberty, of justice and of freedom," Stennett said in the opening prayer.

“We pray for the day when the last trumpet will sound, the last flag will be folded, and the last salute rendered, and when all the last tomorrows have given away to today," he said.

Adding the names of those who died in service

"I’m just so proud of him," said Eric Jones, uncle of Quentin Jones. "I miss him so much. Not a day goes by that somebody’s thinking about him, talking about him.”

Melissa Recker, widow of Jason Recker, said "his children were his world."

"He just was so honored to serve his country for over 24 years," she said.

Jones died June 4, 2020, while on active duty, according to his obituary. He passed away following a motor vehicle accident, city officials have said.

The video observance featured remarks by Mayor Lenny Curry, whose father served in the Navy, about how deeply rooted the military is in Jacksonville.

“It’s why Jacksonville understands better than most what it means to serve our nation and the sacrifice that entails, not just from those who serve but their spouses, children, parents and friends," he said.

The recorded Memorial Day observance drew partly from a wreath-laying ceremony earlier this month at the wall when Gold Star families were able to gather in person.

You can read more from our partners at the Florida Times-Union.