In some way, Hurricane Michael tore nearly every home, every business, every tree and every bush in Panama City. 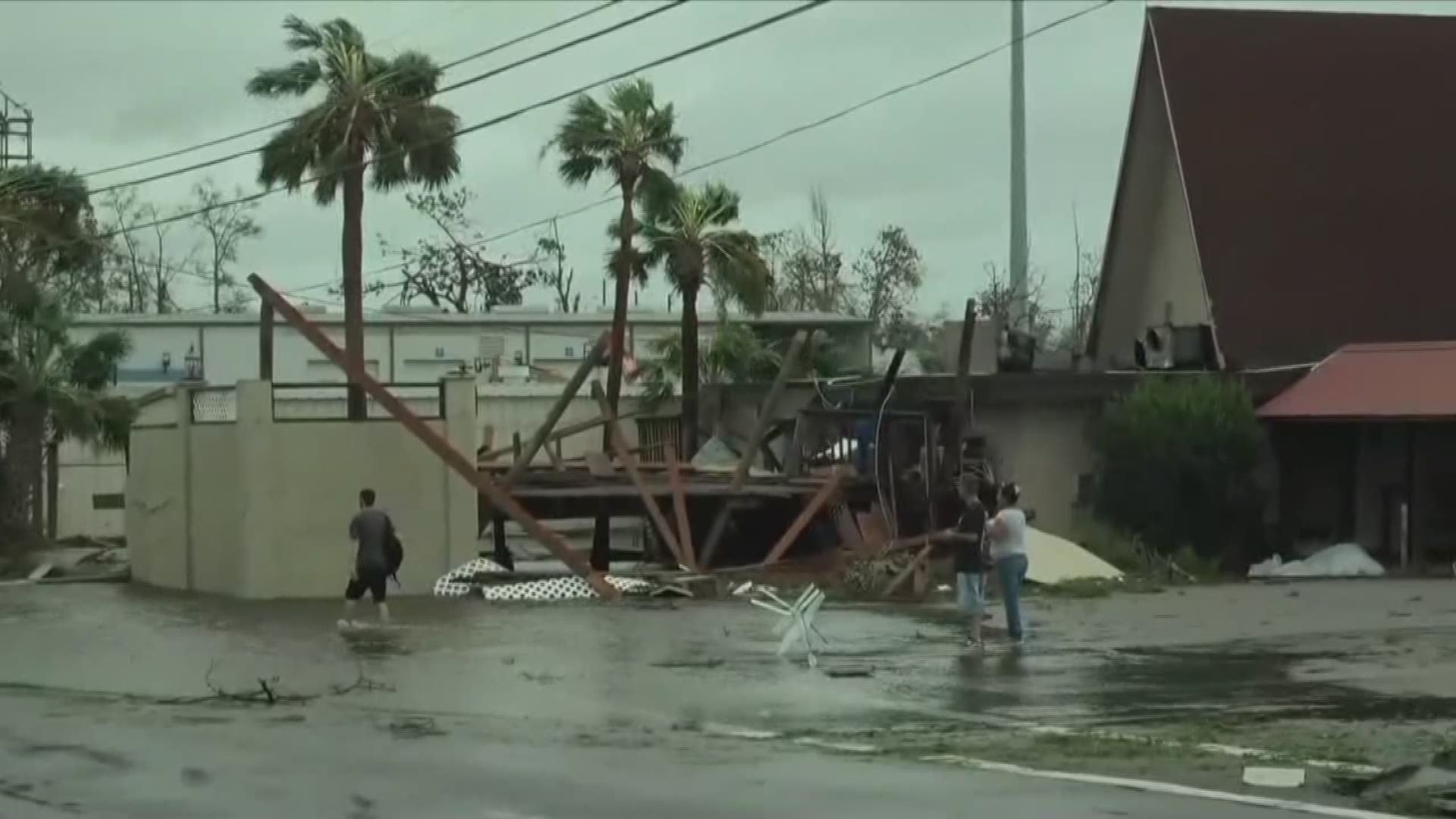 PANAMA CITY, Fla. — People whimpered and prayed, babies cried, children called for their mothers and all the while, bit by bit, the hotel that was saving them from Hurricane Michael's howling was falling apart, brick by brick and roofing tile by roofing tile.

The hurricane’s eyewall came through Panama City shortly after noon Wednesday, shearing trees in half, twisting roofs from their supports and tossing truck trailers and RVs like toys.

Inside the Country Inn and Suites a little more than 2 miles inland from St. Andrew Bay and 6½ miles from the open waters of the Gulf of Mexico, a gathering of local residents and visitors waited for the hurricane's arrival. The Category 4 storm, just 2 mph shy of a Category 5, howled and chewed everything in sight for about two hours.

Scarlett and Charles Hickle of nearby Lynnhaven at first stood in a hallway chatting with other guests. Charles Hickle, a bear of man, held on to the couple's tiny 5-year-old shih tzu, Chanel.

“I snuck her in here” he said. “I told them she was a comfort dog.”

About 10 minutes into the hurricane’s assault, the roof started peeling off the motel with pieces raining down on cars and trucks outside and storm water starting to drip inside the hallway.

Also, suddenly, came a strong smell of gas and a piercing, screaming sound from outside. The collapsing roof had cut the hotel’s gas line.

1 / 19
Joe Raedle
PANAMA CITY, FL - OCTOBER 10: A McDonald's sign is seen laying on the ground after it was knocked down hy hurricane Michael as it passed through the area on October 10, 2018 in Panama City, Florida. The hurricane hit the Florida Panhandle as a category 4 storm. (Photo by Joe Raedle/Getty Images)

For two hours, nobody could get outside to shut it off, nor could first responders get to the hotel. Smoking was forbidden, and guests crossed fingers that a spark wouldn’t set off the gas.

“I tell you what, Scarlett, we got our lives, we got our lives,” Charles Hickle told his wife. “I believe that the next time, don’t be a hero, leave. You can buy new clothes. You can’t buy a new life. Trust your heart, not your head. Your heart says, 'Leave' then leave.”

Watching the raging wind out a back door, Jacob Merritt of Panama City said he was not scared.

“I survived Katrina in Biloxi on the beach,” he said. However, he was not confident about his home. “I don’t think my house is there. I’m right on the bay.”

Whitecaps topped the foot and a half of water in the hotel parking lot.

Ramon Zavala of Panama City said he was thankful.

“We made a good decision to come to the motel,” he said. “The roof is blown off and it’s leaking, but everybody is safe.”

When the wind finally changed direction and ultimately died down, Merritt and other men ventured outside and managed to turn off the gas.

In some way, Hurricane Michael tore nearly every home, every business, every tree and every bush in Panama City.

Standing inside a demolished building on Fifth Street, R.J. Juncker was still smiling.

“I was in the bathroom” when the 5,000-square-foot building he had owned for 32 years collapsed, he said.

Pointing to a collapsed section he said, “I was going to be right over there, but that’s moot.”

Despite the destruction around him, Juncker said he never was scared.