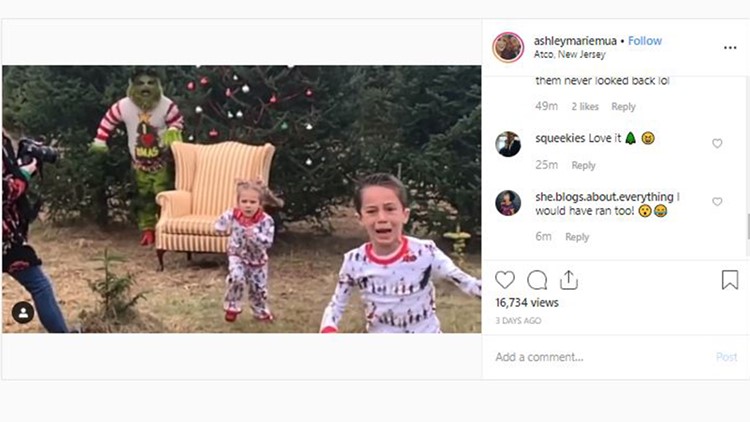 Photo by: TEGNA
A screen shot of an Instagram video showing two kids running after being scared by someone dressed as The Grinch during a Christmas photoshoot in 2019.

A video posted to social media showing two children getting the mistletoe scared out of them by The Grinch has people in stitches.

Joey and Gemma were in their cute Christmas pajamas, standing outside in front of a chair and some Christmas trees for a photoshoot.

"I took my kids to go meet the Grinch and I told him in the car don’t be scared he’s nice they’re pretty cool. My son and daughter say I won’t be scared I like the Grinch...," one of the parents wrote on YouTube.

Someone dressed as The Grinch -- complete in ugly Christmas sweater -- emerged from behind the trees. When the kids turned their heads and saw it, they took off running in terror.

RELATED: The North Pole doesn't have enough ice for sculpture

The video then adds the extra nuance of going to slow motion to get a good look at the kids' faces while "You're A Mean One Mister Grinch" plays over it.

"My kids couldn’t wait to meet the grinch this weekend! I’d say it went well," wrote @ashleymariemua of New Jersey, who posted the video.

The video has been viewed more than 16,000 times in three days.

"I love how neither one of them never looked back," said one person in the video's comments.

Once the kids calmed down, the photoshoot went on without a hitch. Their dad posted photos to Facebook.