A possible short circuit linked to renovation work is the leading theory behind the fire. 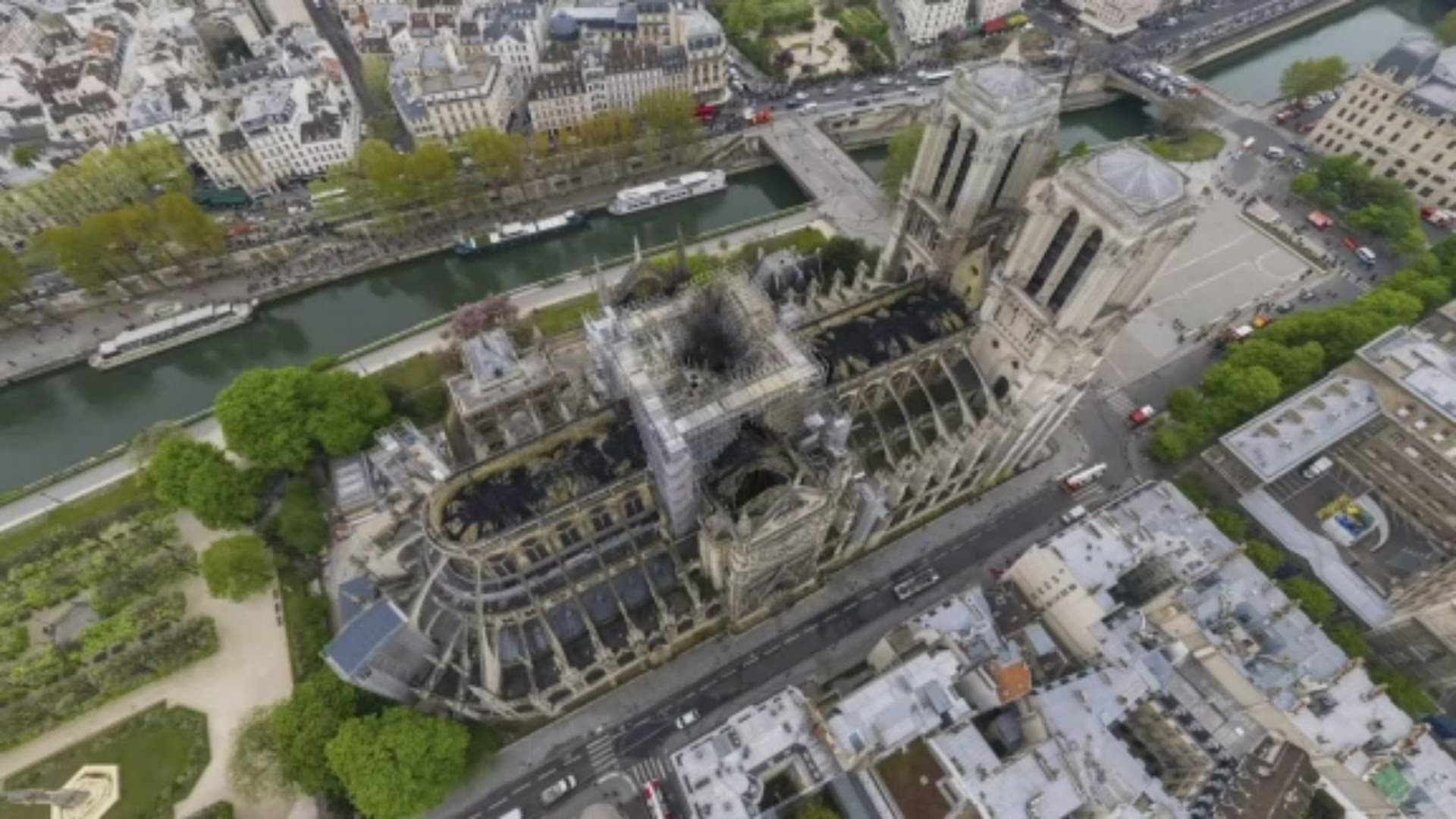 PARIS, France — French police scientists were starting to examine Notre Dame Cathedral on Thursday for the first time since last week's devastating fire. Among their questions: whether cigarette butts from construction workers could have played a role.

Experts from three police agencies will take samples and search for clues as to what caused the blaze, a police official told The Associated Press on condition of anonymity because he wasn't authorized to be identified in media reports.

Police made a preliminary visit last week but weren't able to conduct a thorough examination until the cathedral's structure was secured.

Teams in white helmets talked with firefighters outside the monument Thursday, while workers shored up the roof and sides of the 12th-century cathedral. Multiple cranes are positioned around the site, as the French president pushes for a speedy reconstruction after the fire consumed the cathedral's roof and knocked down its spire.

RELATED: Cathedral rector points to 'computer glitch' as possible cause

RELATED: Woman finds family seen playing in one of the last images before Notre Dame fire

Officials believe the fire was accidental, possibly caused by a short circuit linked to renovation work underway before the fire.

Workers involved in that renovation told investigators that they had smoked on the construction site and left behind cigarette butts, according to the spokesman Marc Eskenazi of Le Bras Freres construction companies.

"It's not good. We condemn this," Eskenazi told the AP. But he insisted that "a cigarette butt did not burn down Notre Dame. It's just not possible."

He cited investigators as saying the fire started inside the cathedral, while the workers were only on the roof. He said the last worker left the building at 5:50 p.m. the night of the fire, while the first fire alarm went off a half-hour later.

He said the worker switched off the electricity to the elevators and the lighting used for the renovation work before leaving.

While the cathedral will remain closed to the public for several years, tourists massed in the neighborhood Thursday to get a closer look at the damage and the work on the building's facade.

France's government presented a bill Wednesday aimed at speeding up the reconstruction of Notre Dame Cathedral and providing transparency on how huge amounts of donation money for the restoration will be spent.

President Emmanuel Macron has set a goal of rebuilding the cathedral in just five years —which some experts consider simply impossible to reach.

Credit: AP
A workers stands between wooden planks on Notre Dame cathedral Wednesday, April 24, 2019 in Paris. Professional mountain climbers were hired to install synthetic, waterproof tarps over the gutted, exposed exterior of Notre Dame Cathedral, as authorities raced to prevent further damage ahead of storms that are rolling in toward Paris. (AP Photo/Thibault Camus)