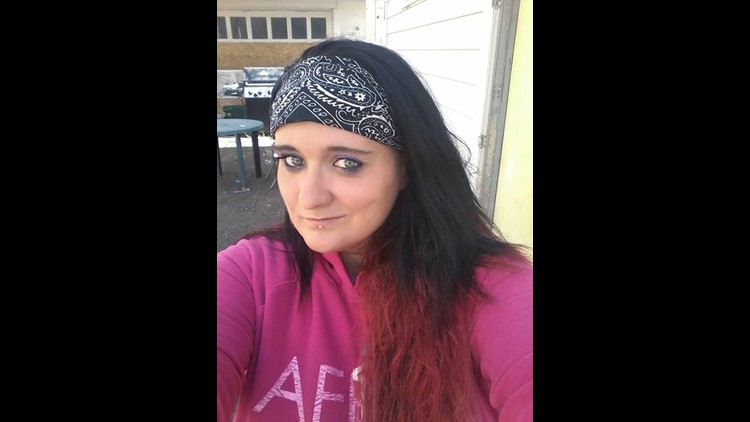 Photo by: Via Jenny Bogart
Jenny Bogart, 38, starting using methamphetamine user at 14, switched to heroin after seven years and then went back to meth. She's been drug free for more than a year.

Far fewer new heroin users, but meth use up: Survey
Author: Jayne O'Donnell and Terry DeMio (USA TODAY NETWORK)
Published: 10:30 AM EDT September 13, 2018
Updated: 6:44 AM EDT September 15, 2018
Jenny Bogart, 38, starting using methamphetamine user at 14, switched to heroin after seven years and then went back to meth. She's been drug free for more than a year.
Via Jenny Bogart

Far fewer people in the United States started using heroin last year, but the decline among young new 18- to 25-year-old heroin users was almost imperceptible – and that age group saw a big jump in methamphetamine and marijuana use, a new survey finds.

The 2017 National Survey on Drug Use and Health emphasizes what it calls these “transitional aged youth” because they have higher rates of cigarette use, alcohol abuse and heroin use disorder, and they use more cocaine, meth and LSD, than people both younger and older.

The report, released by the Substance Abuse and Mental Health Services Administration on Friday, showed one positive change among 18- to 25-year-olds: They’re misusing prescription opioids less. In 2015, SAMHSA estimated 8.5 percent of people in that age range misused prescription opioids; that dropped to just over 7 percent in 2017.

The report helps government officials, medical professionals, researchers and caregivers understand the extent of substance use and mental illness among different age groups nationally, by state and in more local areas. It also helps them gauge the need for treatment services and guide policy decisions, says SAMHSA assistant secretary Elinore McCance-Katz, a psychiatrist.

There was more alarming news. Use of illegal drugs, including cocaine, marijuana, and opioids by pregnant women increased significantly between 2015 and 2017. About 7 percent of pregnant women reported using marijuana. Three percent said they used it daily.

Those who have treated people with substance abuse disorder and people in recovery describe the switch from heroin to meth as predictable.

With all the publicity surrounding deaths from heroin laced with fentanyl, psychiatrist Sally Satel says most addiction experts expected there to be a move away from the drug – just as crack cocaine fell out of favor decades ago.

"I was waiting for this," says Satel, who specializes in addiction treatment. "This is how it works.

"People still want to alter their mental state. So they look for what’s cheap and what’s available and the reputation of the drug."

Jim Beiting is CEO of Transitions, Northern Kentucky’s largest drug treatment and recovery organization. He says meth is "magnetic" to some who suffer from addiction.

“It’s cheaper," he says. "It’s more readily available, (and) the potency is higher than it used to be."

McCance-Katz, who worked in addiction treatment in Rhode Island before joining the Trump administration, says "often people will use both drugs to mitigate unwanted effects of one drug over the other."

A stimulant could help them "get euphoric," she says, and another drug – or alcohol – might keep them from feeling "shaky and paranoid."

Jenny Bogart says she started using meth at age 14, after a traumatic childhood in a small Wyoming town. She moved to New York as an adult, she says, was offered heroin and was hooked immediately.

Heroin was her main drug for two years, she says. Then she moved back to Wyoming and “went right back into gram shots of meth.”

Now she’s been drug-free for a little more than a year, she says.

More: Naloxone can reverse opioid overdoses, but does the drug belong in elementary schools?

“I think a heroin user would turn to meth to ease the withdrawal or balance out the use of heroin,” Bogart says.

• Marijuana use among youths aged 12 to 17 was up compared to all previous years, SAMHSA found. Trends differed between youth and young adults, but marijuana use for both groups appeared to be associated with opioid use, heavy alcohol use and major depressive episodes.

• Those 18 to 25 had higher rates of mental illness. More than 5 percent of men and nearly 10 percent of women in this group had serious mental illness, and 6 percent of males and 11 percent of females had what's known as major depressive episode with severe impairment. Rates of suicidal thoughts or behavior also significantly increased for the age group.

• The percentage of people with substance use disorders who are getting treatment jumped from 10 to 14 percent.

Still, McCance-Katz says, few of the people who want treatment can get it.

If the health care providers who are certified to dispense buprenorphine to treat opioid addiction saw as many patients as they had the capacity for, McCance-Katz says, there would be enough treatment for everyone the report showed has opioid use disorder.

The problem, she says, is that these doctors, nurse practitioners, pharmacists and other health care providers aren't always located in the communities where people are struggling with addiction. She says "telehealth" – virtual connection between health care providers and patients – is needed in more remote or rural areas.

SAMHSA is expanding training and technical assistance and setting up mental health programs in each of the Department of Health and Human Services 10 regions, she says.

HHS got a large boost to its fiscal 2018 budget to expand access to treatment through grants to states and communities, but McCance-Katz says the results might not apparent for awhile."These things take time to be reflected."

More: Mac Miller vigil: Fans remember rapper in the park he named his first album after

Satel says there's a dire need for more facilities where people with substance abuse disorder can detox, and a wider range of options, from the most intense supervision to the least.

"The treatment infrastructure is appalling," she says.

Satel says there's only so much HHS can do to address addiction without integrated social services. Treatment funded through HHS currently doesn't include housing and vocational training, which are the purview of other federal agencies.

"Why would you stay clean if your prospects were still as dismal as they were when you got addicted?" she asks.

If you are interested in connecting with people online who have overcome or are currently struggling with health problems mentioned in this story, join USA TODAY’s ‘I Survived It’ Facebook support group.