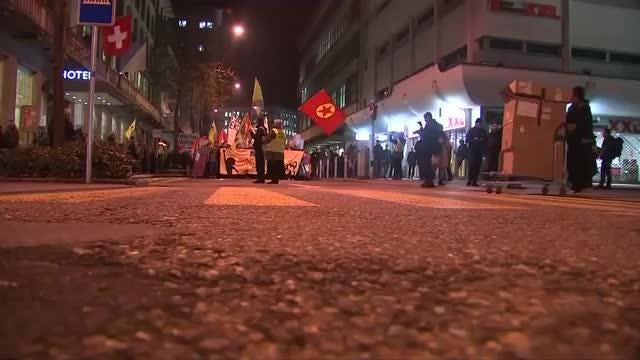 DAVOS, Switzerland — French President Emmanuel Macron told a crowd of internationalists that globalization is in a "major crisis" at the World Economic Forum Wednesday.

He kicked off his address with a joke related to climate change at the expense of President Trump, who arrives in this Alpine resort Thursday morning.

"When you arrive here and see the snow, it could be hard to believe in global warming," Macron said to a packed audience of business leaders and politicians. "Obviously you don't invite anyone skeptical about global warming this year." Trump has commented in the past that he thinks global warming is a hoax.

The White House confirmed Wednesday that Macron would be the guest of honor at Trump’s first state dinner at the White House. No date was announced.

Macron also said "a stronger Europe" was needed to avoid problems with people who feel they've been "forgotten and left behind."

He called on world leaders to act in "a multilateral way" when confronting challenges from nations including North Korea and Iran, and when fighting extremist groups to avoid "fracturing of the region."  Trump's administration has threatened to withdraw from an international accord with Iran that freezes its nuclear weapons program.

1 / 10
Markus Schreiber, AP
Armed Swiss police officers stand guard on the roof of a hotel near the congress center where the annual meeting of the World Economic Forum takes place in Davos, Switzerland, Jan. 23, 2018. The meeting brings together enterpreneurs, scientists, chief executive and political leaders in Davos from Jan. 23 to 26.

"We’ve got not only to win the war against terrorism but we’ve got to create conditions for durable peace," Macron said, adding that a multilateral political and diplomatic approach would help in the Middle East.

More: How men can teach men not to be sexual harassers

"We cannot end up in a world with a cosmopolitan digital elite and an army of discontented workers," Gentiloni said. "Our history and roots are not synonymous with protectionism."

Merkel said that Germany is a country committed to finding multilateral solutions. "Let us not shut ourselves off from the world," she said.

"In terms of trade, we are moving back again towards greater protectionism, greater fragmentation and we are undoing what globalization has been able to achieve," Macron said. "In terms of climate change, we are losing the battle. How are we going to explain to people that they are going to be more vulnerable?"