FHP: 32-year-old pedestrian dead after being struck by garbage truck in Putnam County 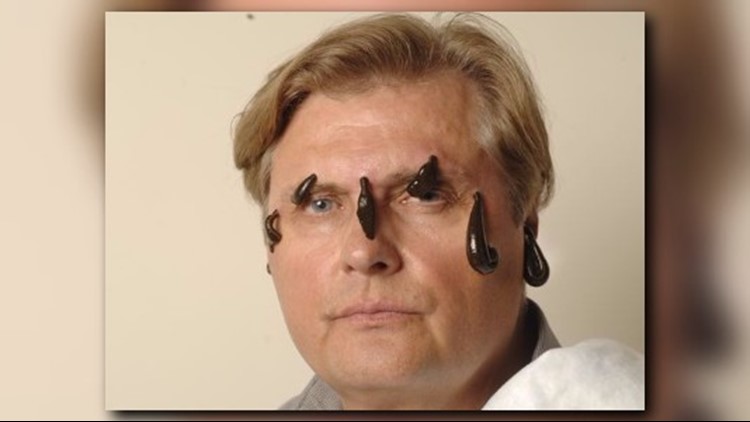 Andrew Plucinski's leeches are picky about skin. When offered the chance to bite a person who bathes in smelly soap they recoil, even when they're hungry. Leeches prefer their humans unseasoned.

Andrew Plucinski’s leeches are picky about skin. When offered the chance to bite a person who bathes in smelly soap they recoil, even when they’re hungry. Leeches prefer their humans unseasoned.

In other ways, Plucinski’s leeches are easygoing. They can live more than a year without food. Some leeches develop a taste for certain hosts, but most will attach to anything that happens by, feeding happily on cows, copper sharks or hippopotamus bottoms.

When a leech is done feeding on one of his human patients, Plucinski, a health practitioner with an office in Garfield, N.J., removes it by pressing down on the host’s skin and squeezing the leech’s head. If left alone, a leech simply grows plump with blood and falls off.

“They’re not slimy,” said Plucinski, 61, who uses leeches to treat all kinds of ailments. “They just do miracles.” Now Plucinski is betting that the revulsion most Americans feel toward leeches is starting to wane. As alternative treatments from acupuncture to aromatherapy and reiki grow in popularity, and famous people like Kim Kardashian experiment with “vampire facials” and other anti-aging treatments using their own blood, Plucinski is expanding his practice in North Jersey beyond his traditional base of older Polish immigrants to appeal to a new clientele.

“I am beginning to see more artists and young people, and they’re not all Polish,” Plucinski said. “I think interest in leeches is starting to grow.” Plucinski’s fascination with leeches has its roots in his childhood in Poland, where women of his grandmother’s generation sat around the house with leeches attached to their foreheads and ankles, hoping to treat migraine headaches and varicose veins.

As a young man, Plucinski developed varicose veins himself. He chose Western treatment instead, including an operation in which doctors removed an entire vein running from his right foot to his groin. The result, he said, was chronic pain and low blood flow to the leg, causing parts of his foot to lose oxygen and turn brown.

“I allowed those criminals to open me up,” Plucinski said, “and today it is still causing me pain.”

Plucinski later suffered a series of ailments and injuries. He twisted his right knee in a skiing accident, suffered whiplash from a car crash, and developed pain in his wrists that doctors diagnosed as carpal tunnel.

Given his new distrust of Western medicine, Plucinski turned to leeches. He immigrated to the United States in the 1980s, settling in Greenpoint, Brooklyn, a traditionally Polish neighborhood. There he found a hirudologist, defined as someone trained in the use of hirudo medicinalis, the species of medicinal leech common in Europe since the Middle Ages.

The therapist attached leeches to Plucinski’s right knee, his wrists and the top of his spine. In each case, Plucinski said, the pain ceased and movement returned.

“It’s very simple,” he said. “I use leeches because they work.”

Leeches gave Plucinski a cure and a calling. He flew home to Poland in 2008 and enrolled in a six-week course in hirudology, graduating with a certificate. He returned and opened his own leech practice in Greenpoint, where he treats older Polish immigrants and a smattering of young artists. Recently he expanded his operations to Garfield, also home to a significant Polish population, where he rents the office of a fellow naturopath and sees patients one night a week.

Plucinski is a large man with a droopy face. In photographs he often looks sad. But in person he is playful, with a dark laugh and eyes full of mischief.

He understands that most Americans find leeches repellent. And he plainly enjoys his role as a leech champion and provocateur.

“Yesterday I placed ten leeches on my heart,” he said, grinning. “If you use them long enough and in a certain protocol, leeches treat the blood to keep it at the proper viscosity.”

The leeches don’t fix these ailments directly, Plucinski said. Rather they remove toxins, improve blood flow and pump healthy enzymes into the organs, helping the body to heal itself.

“This is not Harry Potter,” Plucinski said. “I am not a medical doctor, and leeches do not cure any illnesses. By removing the toxins, your body will get back to homeostasis by itself, and very quickly.”

“It’s all hogwash,” Mark Siddall, a scientist at the American Museum of Natural History and one of the world’s foremost authorities on leeches.

When a severed earlobe or finger is sewn back on, blood flows easily into the new tissue through the arteries, which have hard walls that reconnect easily, according to National Institutes of Health. Veins have soft walls, however, and take longer to sync up. If left unattended, the reattached member fills with blood, clots, runs out of oxygen, and dies. Leeches cure this problem by sucking out the old blood and pumping in powerful anticoagulants to keep new blood flowing.

For this reason ― and this reason alone ― the FDA approved leeches as a medical device in 2004.

Representatives of Hackensack Meridian Health and RWJBarnabas Health, New Jersey’s two largest hospital operators, said none of their facilities use leeches. But hospitals in nearby states, including Bellevue Hospital in New York City and the Hospital of the University of Pennsylvania in Philadelphia, routinely use leeches in their emergency rooms, plastic surgery centers and burn units.

“It’s nothing magical,” Siddall said. “It’s sucking blood out of something that has too much blood in it.”

At a time when doctors use remote-controlled robots to repair the valves of beating hearts, when closet-sized radioactive scanners track individual thoughts as they flash across the neurons of the brain, many Americans might be surprised to learn that leeches have any modern function at all. Surely, we assume, blood-sucking worms must have fallen out favor with other medical practices of the Middle Ages, like treating headaches by drilling holes in the skull and administering enemas using the bile of wild boars.

“When I talk about what leeches do, most people think of medieval stories,” said Bethany Sawyer, manager of Biopharm, the leech farm in Wales that supplies most medicinal leeches used in the United States, including Plucinski’s.

Siddall and Plucinski agree that this modern view fails to give leeches sufficient credit. Contrary to popular belief, the medicinal leech is not slimy, nor is it black. Its dorsal skin is speckled with orange lines and yellow polka dots. Its belly is the color of rust.

The skin is cool and tacky to the touch, like old Scotch tape.

“I got into leeches for the aesthetics,” Siddall said. “I think leeches are beautiful.”

They are also extraordinarily complex. Every medicinal leech has ten eyes, six hearts and 32 brains, Phillips said. Each is a crawling pharmacy, filled with more than 200 enzymes and a sophisticated mixture of drugs to keep blood viscous for the three months it takes them to digest every meal.

Leeches are prescribed for all sorts of health problems. Some scientists are open experimenting. Even if leeches don&rsquo;t do much good, they can&rsquo;t really do much harm. &nbsp; (Photo: Viorel Florescu/NorthJersey.com)

“In the past we thought every leech [species] had a different anticoagulant,” Phillips said. “It was amazing and groundbreaking to find that it’s really a cocktail of anticoagulants that hits all different points of the clotting process.”

The movements of a leech can be fluid or plodding. Using its tail sucker, a leech can grab hold of a rock and probe the area nearby. When it finds a place it wants to go, it latches on with its second sucker, located on its head, and yanks the rest of its body forward, like a tiny accordion.

Not everyone appreciates the leech’s innate beauty.

“Of course they’re gross,” said Marzena Bugag, Plucinski’s girlfriend, who met him years ago as a patient and still receives occasional treatments for migraines. “You’re putting wet, cold worms on your body. It’s not pleasant.”

The impression of leeches as merely medieval also fails to acknowledge their lasting influence, Siddall said. People first started using leeches in medicine in India about 5,000 years ago. The practice peaked in France in the mid-1800s, when keeping a jar of leeches on display in the parlor room was a symbol of a family’s high status and erudition. People too poor to buy their own could rent leeches by the day.

The tradition faded, but never died. As recently as the mid-1950s, two companies imported leeches to New York City, and six drugstores in Manhattan sold them to the public for 75 cents apiece, according to an article in The New York Times from 1953.

“There are schools of hirudotherapy all across Germany and Poland,” Plucinski said. “Leeches have been mainstream medicine for thousands of years.”

Science may be inching in Plucinski’s direction. In early trials, researchers successfully used leeches to treat arthritis, cancer pain and swollen veins, according to the National Institutes of Health.

Most of the studies were too small to be statistically valid, however, and they included no untreated patients to control for the placebo effect. One reason: It’s hard to convince a patient she’s been bitten by a leech when she hasn’t. (One study published in the Nordic Orthopaedic Federation journal makes a tantalizing reference to an “artificial leech.” Sadly the article includes no pictures of this device.)

Some scientists are open to such experiments. Even if leeches don’t do much good, they can’t really do much harm.

“If people really want to put leeches on their ankles and say it helps them feel better, I can’t say that’s not true,” Phillips said. “We might find out someday that there is something to that. But I don’t know of any scientific evidence to support that they’re a cure-all.”

Depending on one’s point of view, Plucinski is either a modern-day witch doctor or an innovator at the bleeding edge of leech science. Either way, he continues to try new treatments. One of his newest is called the vampire facial, in which he applies leeches to suck blood from the belly. Then he squeezes the blood from the leeches into a foam cup, dabs it with a gloved finger and smears it on the patient’s face.

“Leeches cannot turn back time,” he said. “But after a few applications, you begin to see the wrinkles become more faint.”

Demand for blood facials spiked after 2013, when Kim Kardashian received a similar procedure in an episode of her TV show Kourtney and Kim Take Miami. Compared to leeches, Kardashian’s ordeal was genuinely medieval. Instead of leeches, her doctor used a handheld device with nine needles to stab Kardashian repeatedly in the face.

“Ow! That hurts so badly!” Kardashian said as the needles pounded her forehead. “Ow!”

She might have preferred Plucinski’s method instead. Leech bites are painless.

And while hirudology remains out of favor with most celebrities, leeches do leave behind marks of high status. Each leech has 270 teeth on three jaws, arranged in a triangle.

When removed, they create a scar shaped like the badge of a Mercedes-Benz.