Did we just say goodbye to the greatest generation? 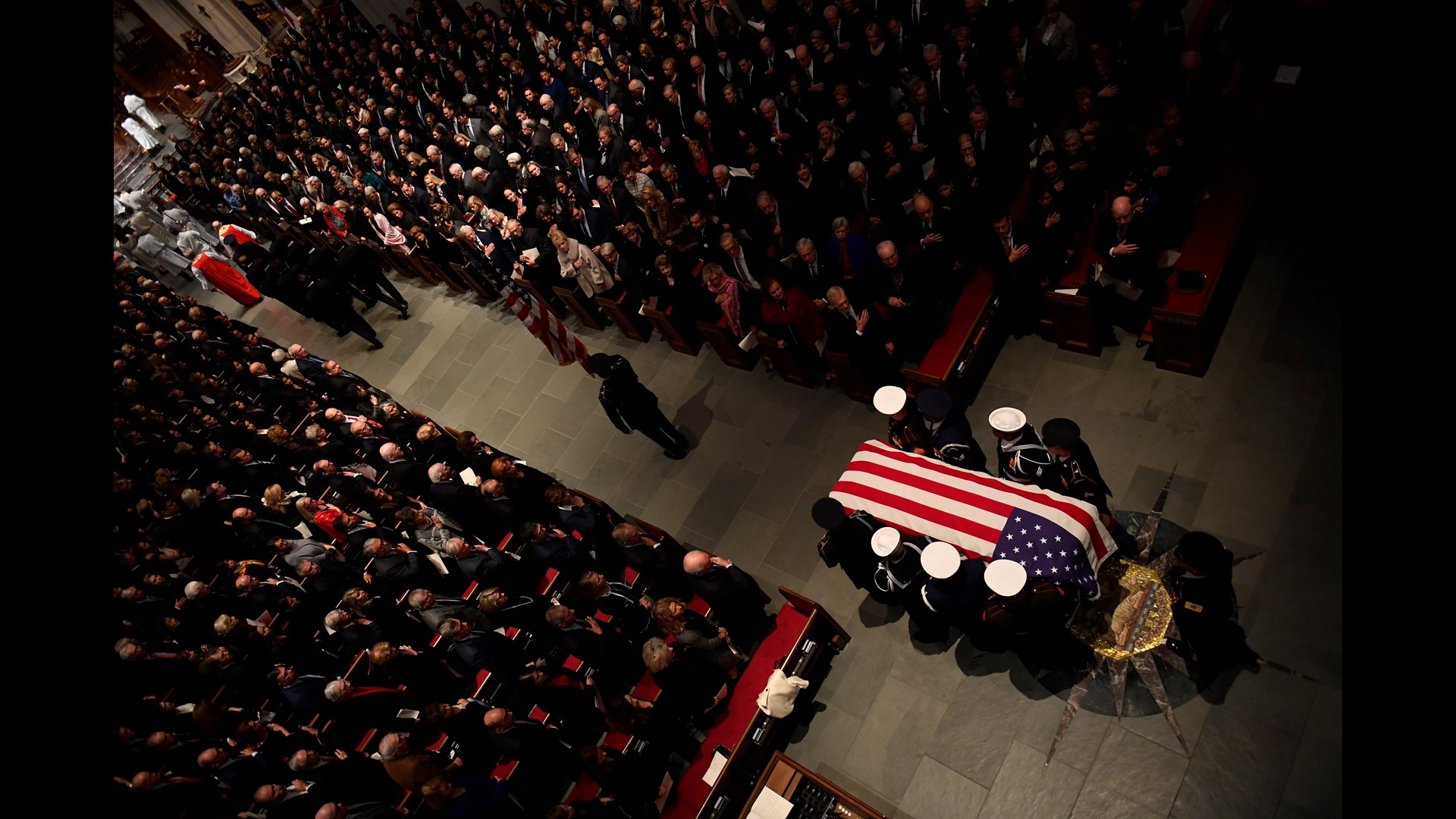 HOUSTON – The funeral service for George H.W. Bush at his hometown church Thursday was a farewell to a friend, a neighbor and a former president, to be sure.

And to a generation.

“George Bush was a charter member of the Greatest Generation,” his closest friend, former Secretary of State James Baker, declared in his eulogy. “His incredible service to the nation and the world is already etched in the marble of time.”

A day earlier, at Washington’s National Cathedral, historian Jon Meacham called Bush “America’s last great soldier-statesman, a 20th-century founding father,” one in a line of presidents “who believed in causes larger than themselves.” Bush was the last president to have served in combat.

It was author and TV anchor Tom Brokaw who dubbed it the Greatest Generation, the Americans who had survived the Great Depression and then fought in World War II. That conflict was the formative experience for many, including George Herbert Walker Bush, a son of privilege from Greenwich, Connecticut. His determination to accomplish something big in his life, something meaningful, was fueled when he survived being shot down over the Pacific and his two crew members didn’t.

Bush was one of the youngest Navy pilots when he enlisted on his 18th birthday, in 1942. He ended up living to age 94, old enough to see many of the classmates from his prep school and the men in his squadron and his colleagues in Congress pass away.

He died last week at his home here, a few blocks from the spired church he had attended for a half-century.

At the National Cathedral service Wednesday, former Canadian Prime Minister Brian Mulroney described a small wooden plaque Bush once showed him on the oceanside wall of his summer home in Kennebunkport, Maine. It was inscribed with a pilot’s acronym that summed up his approach to life: “CAVU,” for “Ceiling and Visibility Unlimited.”

At the St. Martin’s Episcopal Church service Thursday, the friend who made the plaque was sitting in the pews.

Dan Gillcrist was a junior business executive and a former submariner when he volunteered for Bush’s early Senate campaign, a travel aide to the candidate as he crisscrossed the state. Years later, when they saw each other at the funeral for another Navy man, Bush admired the CAVU sign placed near his casket and asked Gillcrist, an amateur wood craftsman, to make one for him.

Gillcrist ended up making several of them for Bush over the next decade or so to display in his homes and give as gifts to foreign dignitaries and others. He understood why the phrase meant so much to the former president.

“To the young Navy carrier pilot Lt. j.g. George H.W. Bush, the expression 'CAVU' took on greater meaning following the war,” Gillcrist said. “I believe that a great many of our ‘boys’ coming home safe and sound from the crucible of that war felt the same as George Bush.” They were grateful to have escaped death when many of their friends didn’t. The lesson they learned: “Every new day is going to be a gift I will not squander.”

The service at the cathedral Wednesday had been grand and global, five presidents and dozens of foreign dignitaries in attendance. 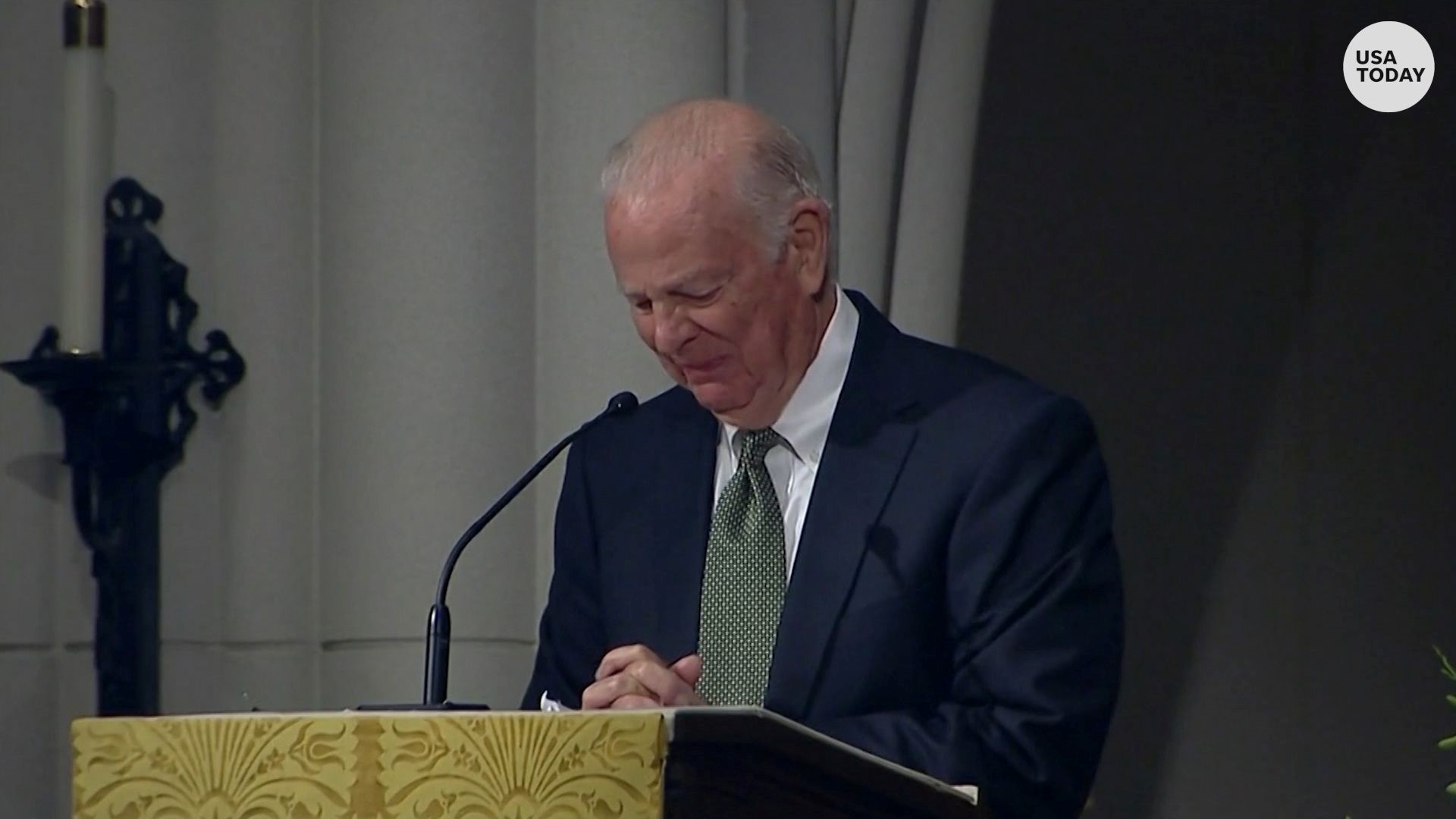 More: Here's the history behind the Presidential Train Car that will transport George H.W. Bush

Bush and Trump: The contrast that went unspoken but was impossible to miss at the funeral

The service at the church Thursday had a cozier feel, though every seat was taken. The tributes were delivered by Baker, his best friend, and by George P. Bush, his oldest grandson and the one who carries his name.

“He often talked about the timeless creed of duty, honor, country – the values that have sustained the republic,” said Bush, now the land commissioner of Texas, the only grandchild who has followed the man he calls “Gamps” into elective office. “But that wasn’t something he just talked about. It was something he lived.”

George H.W. Bush had moved back to Houston after the worst political defeat of his life, crushed after losing the White House to Bill Clinton, a man he then saw as undeserving of the Oval Office, although they later became close friends. When he and his wife, Barbara, landed at Ellington Air Force Base in late afternoon on that difficult Inauguration Day in 1993, they had been cheered by the sight of store signs welcoming them and well-wishers lining the route to the house they had rented while a new one was being built for them.

They never forgot one couple standing on the bed of their pickup, parked by the side of the road, holding a handwritten sign that said “Welcome Home.”

On Thursday, there were well-wishers again along the route of the special Union Pacific train that carried Bush’s casket from suburban Houston to College Station, Texas.

Trains had provided the transportation for Bush when he left for aviator training at various naval bases, and when he came home after seeing combat for a wartime wedding to Barbara Pierce of Rye, New York. On Thursday, on his final journey, it was a train that carried him to his burial plot near his presidential library, on the grounds of Texas A & M. He was to be buried next to his wife of 73 years and daughter Robin, who died in 1953 at age 3 of leukemia.

The night before the National Cathedral service, when Bush’s body was lying in repose at the Capitol Rotunda, there was the most poignant reminder of the Greatest Generation, and their passing.

Former Kansas Senator Bob Dole arrived in the Capitol Rotunda to pay his respects to a one-time political rival who became a close friend, and a fellow veteran of World War II. The effort it took for Dole, 95, to stand from his wheelchair was etched in his face.

The wounds he had suffered in battle so many decades ago robbed him of the use of his right arm. So he raised his left hand in a final salute.