A 10-year-old girl is recovering at Vanderbilt hospital after a freak accident caused her to get a rare infection. But that's just the beginning of her story. 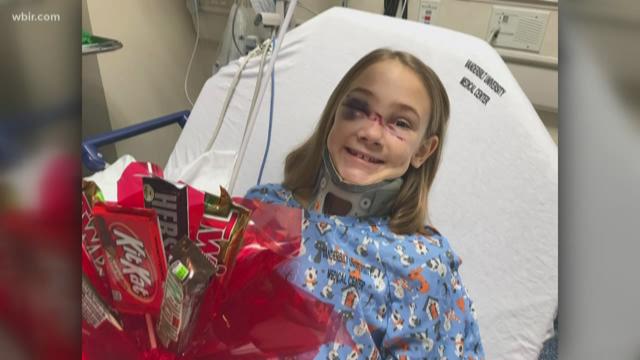 NASHVILLE, Tenn. — Hundreds of thousands of people across the world are now joining the movement to 'Pray for Chloe' Clark.

Chloe Clark's father posted a video to Facebook saying that his daughter had spinal meningitis and asked for prayers.

Her father, Jared Clark, has been building a house for his family. On Jan. 11, he was putting decking on the roof when a piece of plywood fell and crashed through a safety barrier.

His 10-year old daughter Chloe had wandered from the area where she was supposed to be playing and walked straight into the falling board's path.

"As soon as I heard the scream I knew we were going to the emergency room, I knew it was bad enough just from the sound," Jared said.

A fast trip to their local hospital showed they would be needing more robust services than what the hospital could provide.

Chloe was transferred to Vanderbilt's children's hospital and treated for the trauma but the day she was ready to check out, her condition took a nose dive.

"She actually took a little nap and then she woke up screaming in pain, she grabs the back of her head and we're kinda freaking out like what's going on," Jared added.

Further tests showed she had meningitis, an infection of the fluid and membranes around her spinal cord.

Her father, Jared, took to Facebook asking for prayers and his video was shared around the world.

Soon people from as far away as Spain and Kenya shared encouraging words and prayers for Chloe. They told how Chloe's story changed the way they chose to live.

"I have had messages from people all around the world saying, I spend more time with my children today, my husband and wives, they actually took time off to be together," Jared said.

Her dad said Chloe wants to be a missionary and she had no idea the hardest days of her young life would bring so many people together across the globe.

"It's awe inspiring how God can take my precious little 10-year-old girl and take such a tragedy and bring so many people closer together, families improved and lives turned around and changed for the good," Jared added.