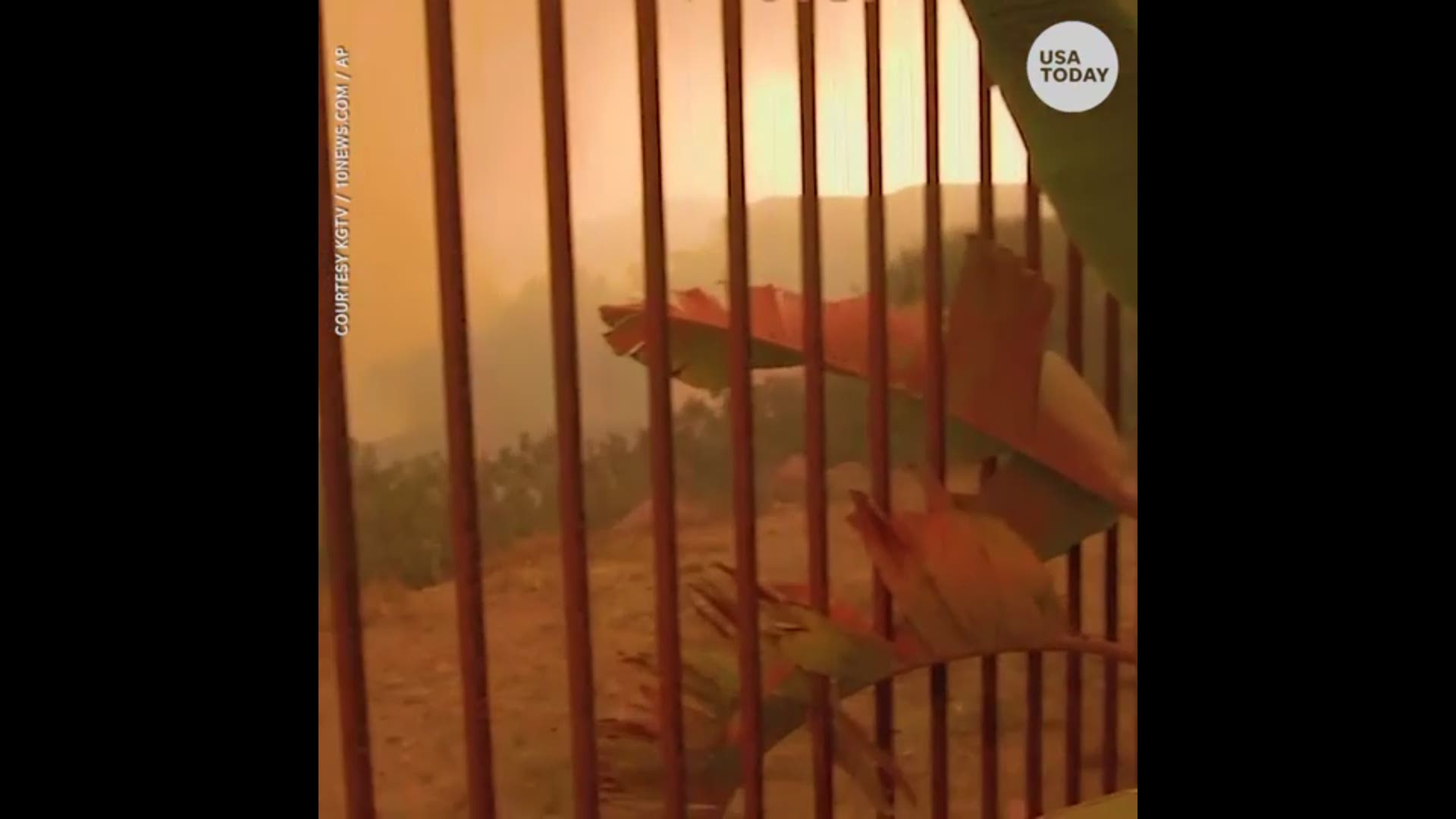 Credit: Colin Atagi/The Desert Sun
Authorities have arrested a man accused of sparking the Holy Fire, the wildfire that has scorched more than 6,200 acres in the Cleveland National Forest since Monday, August 6, 2018.

Even as the Holy Fire rips across valleys along California's Riverside-Orange County line, more residents are being ordered to evacuate, and the man accused of setting the blaze, which is now 10,236 acres, or nearly 16 square miles, awaits a rescheduled arraignment Friday.

The Cleveland National Forest said on Thursday that mandatory evacuations extended to Elsinore and include all homes on the mountainside of Lake Street, southwest of Grand Avenue to Ortega Highway.

Still, firefighters said they expected favorable weather conditions over the weekend to help them extinguish the growing blaze. Among the more than 1,200 firefighters on scene, two have been injured. One suffered a fractured knee, while another twisted an ankle. Both were taken to a hospital for treatment.

An arraignment for Forrest Gordon Clark, 51, was canceled on Thursday but was scheduled for Friday at 10 a.m. Among the charges he faces are suspicion of aggravated arson with the intent to cause injury to another or damage property; arson of an inhabited property; forest arson; making criminal threats; resisting arrest; and arson causing structures to burn.

The Holy Fire, which started out as an Orange County wildfire, burned its way through the Cleveland National Forest into Riverside County. Smoke has engulfed the Lake Elsinore region, where many of those impacted have tried to remain calm and go about their daily lives.

It was sparked Monday afternoon and burned through more than 10,000 acres by Thursday evening, destroying 12 structures. Firefighters have contained 5 percent of its perimeter.

Debbie Muñoz and her family and her family fled to the evacuation center at Temescal Canyon High. She said she remembers looking out her living room window and seeing an “intense” glow emanating from the hills barely a mile from her Horsethief Canyon home.

By Wednesday afternoon, flames from the Holy Fire had gotten close enough for authorities to issue a mandatory evacuation for her community.

Evacuating went smoothly, but “it’s pretty scary having to leave the comforts of our home,” said Muñoz, 54, who was not only concerned about fire damage, but also possible vandalism and looting.

More: The Cranston Fire has burned over 13,000 acres. Here's how it unfolded near Idyllwild

Credit: AP
This booking video image released by the Orange County Sheriff's Department shows 51-year-old Forrest Gordon Clark, who was booked into Orange County jail in Santa Ana, Calif., Wednesday, Aug. 8, 2018. Clark was arrested in connection with the so-called Holy Fire, which has burned more than 6 square miles in the Santa Ana Mountains. Clark was booked on suspicion of two counts of felony arson, and one count each of felony threat to terrorize and misdemeanor resisting arrest. (Orange County Sheriff's Department via AP)

Clark was arrested Tuesday on suspicion of starting the fire. He faces at least two counts of arson, one count of felony threat to terrorize and one count of misdemeanor resisting arrest, according to Cleveland National Forest officials.

The fire ignited near the suspect's cabin, which is in a rural area with about 15 homes. Each resident has a 99-year lease and occupants aren't allowed to live there full time, Orange County Fire Authority Battalion Chief Shane Sherwood said at a news conference on Wednesday.

If convicted, Clark could face life in prison.

Evacuees flocked to Temescal Canyon High, where as many as 77 people stayed at a single time, American Red Cross volunteers said. Volunteers at the evacuation center at San Juan Hills High School said they hadn’t received any evacuees.

Highway 74 runs through the Cleveland National Forest and connects Lake Elsinore to San Juan Capistrano. Toward the Lake Elsinore side, firefighters had gathered in El Cariso, a small community along Highway 74 with homes, shops and restaurants.

Credit: Colin Atagi/The Desert Sun
Firefighters can be seen outside of Hell's Kitchen Motorsports Bar & Grill on Highway 74. Firefighters are using this restaurant parking lot as a home base.

There, firefighters set up a make-shift base in the parking lot of Hell’s Kitchen Motorsports Bar & Grill, where the owners have been collecting supplies to provide “real meals” and keep first responders hydrated, co-owner Frank Opp said.

Stacks of water and energy drinks piled up in and outside the restaurant, and firefighter after firefighter stopped by between briefings to grab a drink.

Opp was at work before evacuation orders were issued and said he decided to stick around when it came time for residents to leave. Other residents began contributing supplies until “it got so congested, we had to put a stop to it,” Opp said.

A GoFundMe.com account was set up for anyone who wants to donate money for Opp to order supplies. It’s listed under the “Holy Fire First Responder Fund” and had raised $10,422 by Thursday afternoon -- well above its goal of $1,000.

Credit: Colin Atagi/The Desert Sun
Firetrucks line up to battle the Holy Fire, the wildfire that has scorched more than 6,200 acres in the Cleveland National Forest since Monday, August 6, 2018.

Meanwhile, Horsethief Canyon residents Tom and Lisa Mensik stopped to volunteer at Temescal Canyon High  after being evacuated on Wednesday.

They stayed with a relative in Murrieta following an evacuation process they also said went smoothly, due in large part to having already packed up their belongings a day before. They've been able to remain calm because a neighbor installed a webcam showing live footage of the neighborhood, which remains unscathed.

The couple's lived in Horsethief Canyon since 1999 and it was their first time evacuating due to a fire. Tom Mensik said it was inevitable, since they live in an area prone to wildfires, but his wife was still nervous.

"It's one of the biggest fears I had," Lisa Mensik said.