There has been another break in the sand dunes in St. Johns County, right in a spot where there is a multi-million dollar effort to rebuild the dunes and restore the Summer Haven River. 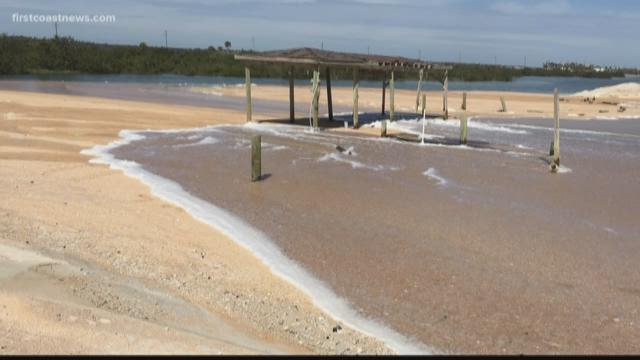 ST. JOHNS COUNTY, Fla. -- There has been another break in the sand dunes in St. Johns County, right in a spot where there is a multi-million dollar effort to rebuild the dunes and restore the Summer Haven River.

Jay Ginn's family has lived along the Summer Haven River for decades.

This beloved river that's very close to the ocean has been threatened by ocean water before, and now, it could be threatened again.

Video taken by Walter Coker over the weekend shows salt water being pushed over the beach and into the river. It happened during high tide.

To understand this story, you have to go back 10 years. The first real breach of the dunes in that area happened in 2008 during a tropical storm. The ocean water sent sand into the Summer Haven River and sanded it in in spots.

About two years ago, after state funding and a community effort to restore the Summer Haven River, sand was removed from the river and placed onto the beach rebuilding the dune system.

When Hurricane Matthew hit, the dunes were breached again, and the dune was patched back together.

And now this weekend, the dune was breached in the same place Matthew had broken through.

Ginn said it's an area that had not been fully repaired.

After hearing the news about this latest event, Ginn thought, "Let's get down there and fortify those dunes."

Shinkre said the county is reviewing the situation to know what to do next. Jerry Dixon with the port and waterway authority told First Coast News if something isn't done fast, another inlet will form there.

Some people question why so much money is spent to see the dunes wash away again, but not Ginn and many of his neighbors.

He said, "I think we should be stewards of our environment. And this stretch of river here is probably the most beautiful on the East Coast of Florida. And to let that be degraded would be an injustice to our future generations. This river needs to be given a good chance, and let it flow."