OurJax joined the Jacksonville branch of the NAACP in coming out strongly against the proposed terms for one of the biggest development deals in city history. 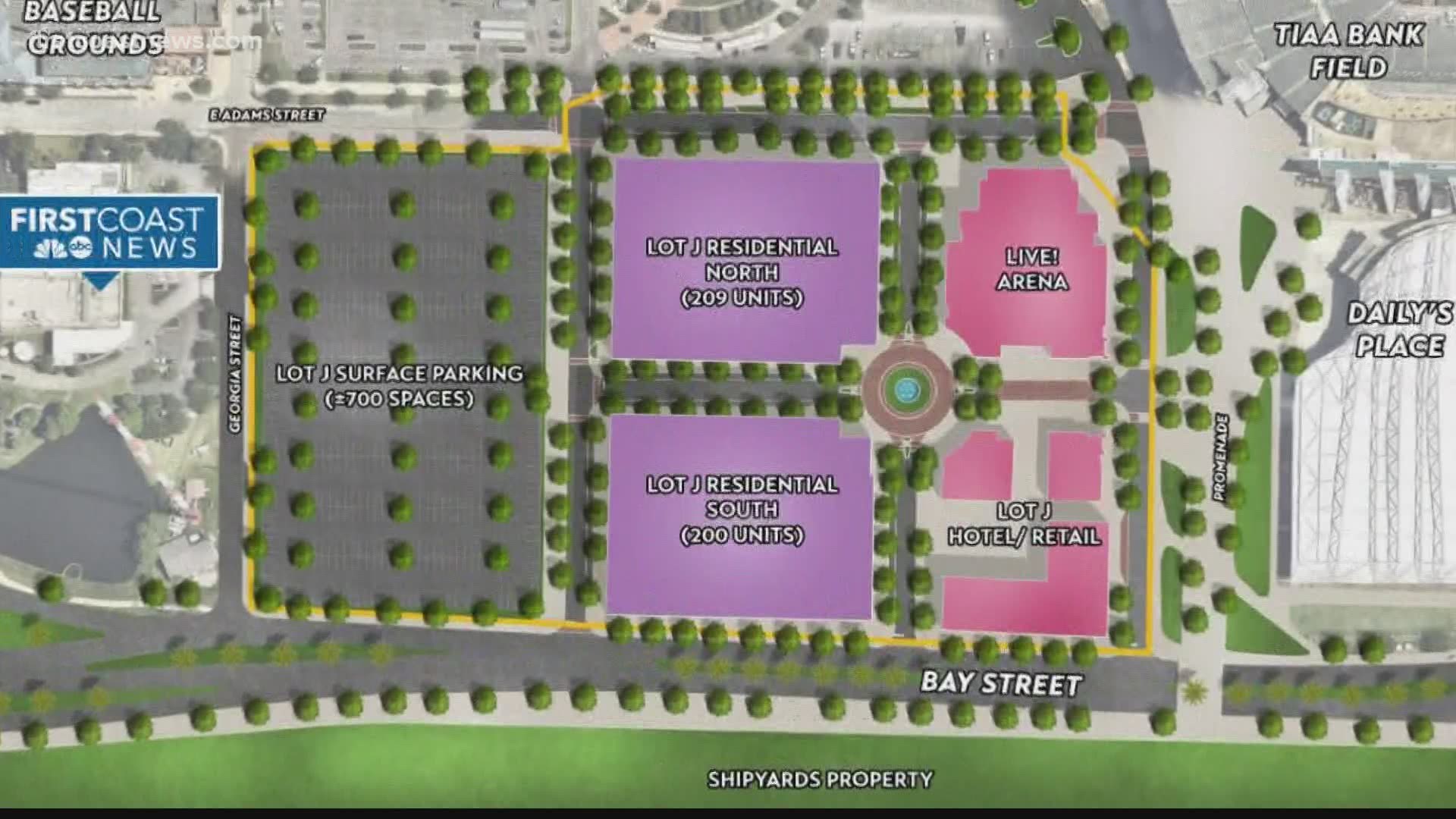 JACKSONVILLE, Fla. — The watchdog group OurJax on Tuesday urged City Council to reject the proposed Lot J development, calling it a "rigged deal" that should be scrapped so negotiations can start over with the usual vetting for downtown developments that seek taxpayer subsidies.

OurJax joined the Jacksonville branch of the NAACP in coming out strongly against the proposed terms for one of the biggest development deals in city history.

The NAACP ramped up its opposition by sending a letter to NFL Commissioner Roger Goodell saying the NFL should intervene against the proposed deal between the city and the development team of Jaguars owner Shad Khan and The Cordish Companies.

"I also ask that you develop and implement new NFL policies and practices to ensure the league and team owners will never again seek to unfairly enrich themselves at the expense of the local communities," branch President Isaiah Rumlin wrote in the Dec. 17 letter.

More:City of Jacksonville could give Shad Khan $152 million in incentives for Lot J

City Council put a hold on the Lot J legislation during its winter break, but the bill will come back in full force after the New Year with a final vote potentially on Jan. 12.

The NAACP previously urged City Council members to reject the deal. OurJax, a non-profit that formed in reaction to last year's attempt to sell JEA, had raised concerns in the past and urged residents on Tuesday to "add their voices to ours" in calling on council to kill the deal.

"We're not opposed to the Lot J development," OurJax Chairman Michael Ward said. "We think it would probably be good for the city. What we're opposed to is the particular deal that's before us."

The proposed Lot J deal has picked up a mix of support and opposition from civic groups for the proposed entertainment district, mid-rise apartment buildings and luxury hotel that would be built on land now used as a parking lot near TIAA Bank Field.

The proposed deal would commit the city to as much as $233 million in taxpayer investments and incentives for the development whose total cost would be $450 million to $482 million.

Ward said the proposed deal was flawed from the start because it did not go through the Downtown Investment Authority with its "taxpayer safeguards" for negotiating terms as happens with other downtown developments.

In a statement Tuesday urging residents to contact City Council members, OurJax said a $65.5 million no-interest "breadbox loan" would be a "gift from taxpayers" to the Lot J developers.

The city would provide the $65.5 million to the developers who in turn would keep $52.4 million in cash and put the other $13.1 million into a trust account where it would be invested until it grows to $65.5 million for repayment of the city's contribution.

More:Nate Monroe: $65 million 'loan' is a boon for Jaguars and a bitter pill for taxpayers

Curry administration officials have said the negotiations initially included a $65 million cash grant to the developers, but federal tax laws would have siphoned a chunk of that money. Rather than have city dollars end up with the Internal Revenue Service, the city switched to the breadbox loan that also offers a way to recoup the city's cost in the future, Chief of Staff Jordan Elsbury has said.

Ward said a report by the Downtown Investment Authority staff on the proposed development deal questioned whether the $65.5 million even is necessary for the development to be economically viable.

City Council members asked DIA to examine the deal negotiated by the Curry administration but drew a line at DIA renegotiating the terms. Ward said the city should restart the process by letting DIA negotiate a fresh deal.

He noted that the City Council Auditor determined the city's benefit in the form of new taxes from the Lot J development would be just 44 cents for each $1 of city expenditures on Lot J.

"In any business deal, and this is a business deal, you have to look at it and say is this acceptable or not," Ward said. "If the City Council votes it down and the Jaguars and the Cordish Companies say they are no longer interested, then so be it. There will be other developments that come along."

Curry administration officials have said they negotiated the deal out of the mayor's office because the city-owned Lot J parking lot is covered by the city's lease with the Jaguars for game-day parking requirements.

In the letter to the NFL, Rumlin also criticized the process used to negotiate the Lot J deal terms.

"It is frustrating to witness this latest attempt to enrich millionaires and billionaires with taxpayer dollars while many Jacksonville residents live in poverty, fear for their safety and suffer disproportionate impacts from the COVID-19 pandemic," Rumlin wrote to Goodell.

He said the NFL's recent commitment to fight "systemic racism" and correct injustices suffered by Black Americans "is apparently ringing hollow" in Jacksonville.

The Jaguars were at the forefront of NFL teams in joining the Black Lives Matter rallies over the summer. Jaguars players, coaches and front-office staff marched in June from TIAA Bank Field to the Police Memorial Building to raise awareness about racial injustice against the Black community.

That march came days after Khan posted an open letter on the team's web site that said racism "in all its forms, will kill. It kills people, it kills communities, it kills dreams, it kills hope."

Khan wrote about his automobile parts manufacturing company opening plants "in the underserved areas of Chicago and Detroit" and said the team's commitment to downtown Jacksonville likewise would make a difference.

"People in those areas only needed an opportunity – and hope – to break the relentless cycle of poverty and oppression. It is inspiring and why I am also committed, with the Jaguars, to investing in developments we envision for downtown Jacksonville, where new jobs will result in immediate and sustainable livelihoods."