Vindicated: Former Teacher of the Year opens up about dropped child molestation charge

Two years after accusing Eric Cabrera of molesting him at school, the teen who made the accusations swore under oath it never happened. 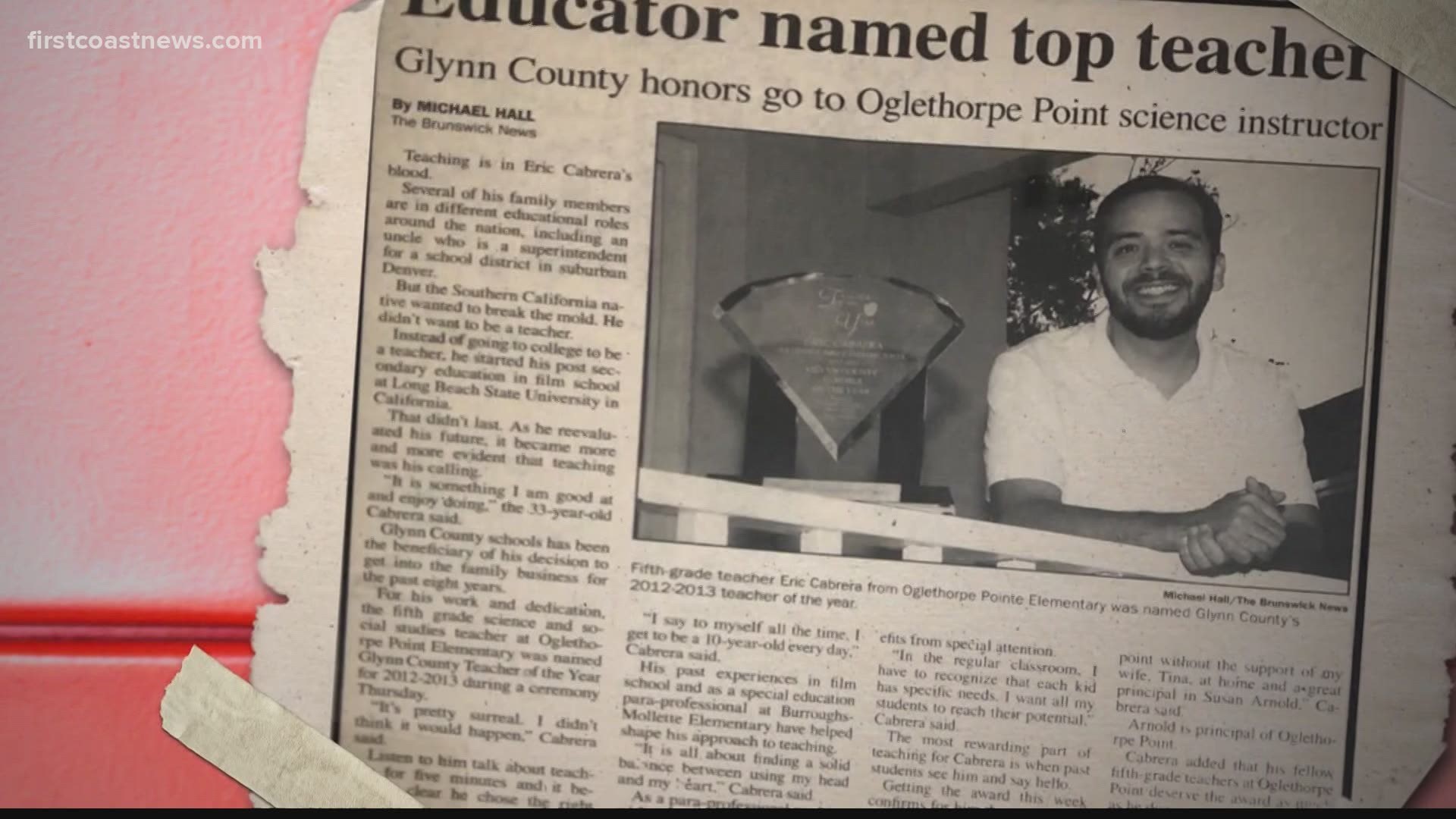 GLYNN COUNTY, Ga. — It was a life-altering accusation: An elementary school assistant principal accused of child molestation by a former student, but the accusation wasn’t true according to the same student two years later.

Now that educator is sharing his story and hoping to clear his name.

Honored as Glynn County’s 2012-2013 Teacher of the Year,
Eric Cabrera worked hard build his reputation and advance in his career, climbing his way up the ranks from a teacher’s assistant to assistant principal.

He was working at Oglethorpe Point Elementary on St. Simons Island in August 2018 when a police officer came to the school and met with him.

“He said that a student that had been at the school years before had said that I had molested him,” Cabrera recalled.

A week later Cabrera was arrested at his home. His picture flashed across television screens for everyone, including his wife and children, to see.

“You just say 'What?' You know it just doesn't it doesn't register. It doesn't make any sense. It shifts your whole world,” Cabrera said. “It destroyed us.”

His accuser, a former fifth grader, was at a treatment center when, according to a police report, he disclosed to a psychiatrist that he was molested by a teacher.

In a deposition taken in 2020, the student said he had written about it during a group therapy session and threw the paper away in a trashcan. He said a counselor saw him crying, pulled out the crumpled paper and asked him about it. The teen alleged it happened inside a locked classroom after school.

“I went to jail, spent about ten days almost, ten days in a jail cell," Cabrera said. "I was bonded out by good support of fellow teachers.”

For nearly two months, Cabrera was required to wear an ankle monitor before the district attorney dropped the charges due to a lack of evidence, but that didn’t erase the stain of the accusation.

“All I wanted was my good name back,” Cabrera said.

Part of that meant trying to prove the allegations were false.

His attorney, J. Dow, took video inside Cabrera’s former classroom he said to show how easy it would have been for anyone passing by to see what was happening through the window. He also sued the teen and his parents for defamation.

After a year and a half of costly litigation, the teen swore under oath that he had not been sexually abused by the former teacher.

Cabrera’s initial lawsuit asked for payment in excess of $100,000, but he settled the case for one penny and a signed affidavit from the teen saying Cabrera never molested him.

“I just bawled my eyes out. I just couldn't keep it together, but it was joy. It was happiness. It’s what my wife and daughter and I had wanted for a long time,” Cabrera said. “When someone puts that label on you, of course, it's one of the worst things you can accuse anybody of, and you know you still walk around with a huge sense of insecurity in terms of like you know what do people think of me?”

Looming larger than even that question is why this student accused him in the first place.

“I still don't comprehend I still do not comprehend it,” Cabrera said. “I really just I don't want anybody ever, ever to go through this.”

Attorney Amanda Williams, who represented the teenager who made the accusation, declined to do an interview. When asked about this case she only said, "It is a lot more complicated than it seems."

Williams also declined to put First Coast News in touch with the accuser’s family, who she said moved out of town. The family did not response to attempts to reach them by mail and on social media.

Cabrera is now back working for the Glynn County School District.

It’s important to point out that cases of false allegations of child sex abuse are rare according to experts. Marci Hamilton, CEO of the advocacy group Child USA, says fewer than 5% of children fabricate child sex abuse claims. She offers this advice to protect everyone.

“There are some really simple approaches. They're going to see simplistic, but actually they work," Hamilton said. "One is a teacher is never allowed to be alone with a child. If a teacher is helping a child after school, the door to the classroom is open. Other people are in the building. The child doesn't go over to the teacher's house by themselves. They don't go in a car by themselves."