Video of protester's arrest now under administrative review by JSO

As one officer announced over an intercom for everyone to disperse or else they would be arrested, video shows chaos ensued and dozens of arrests were made. 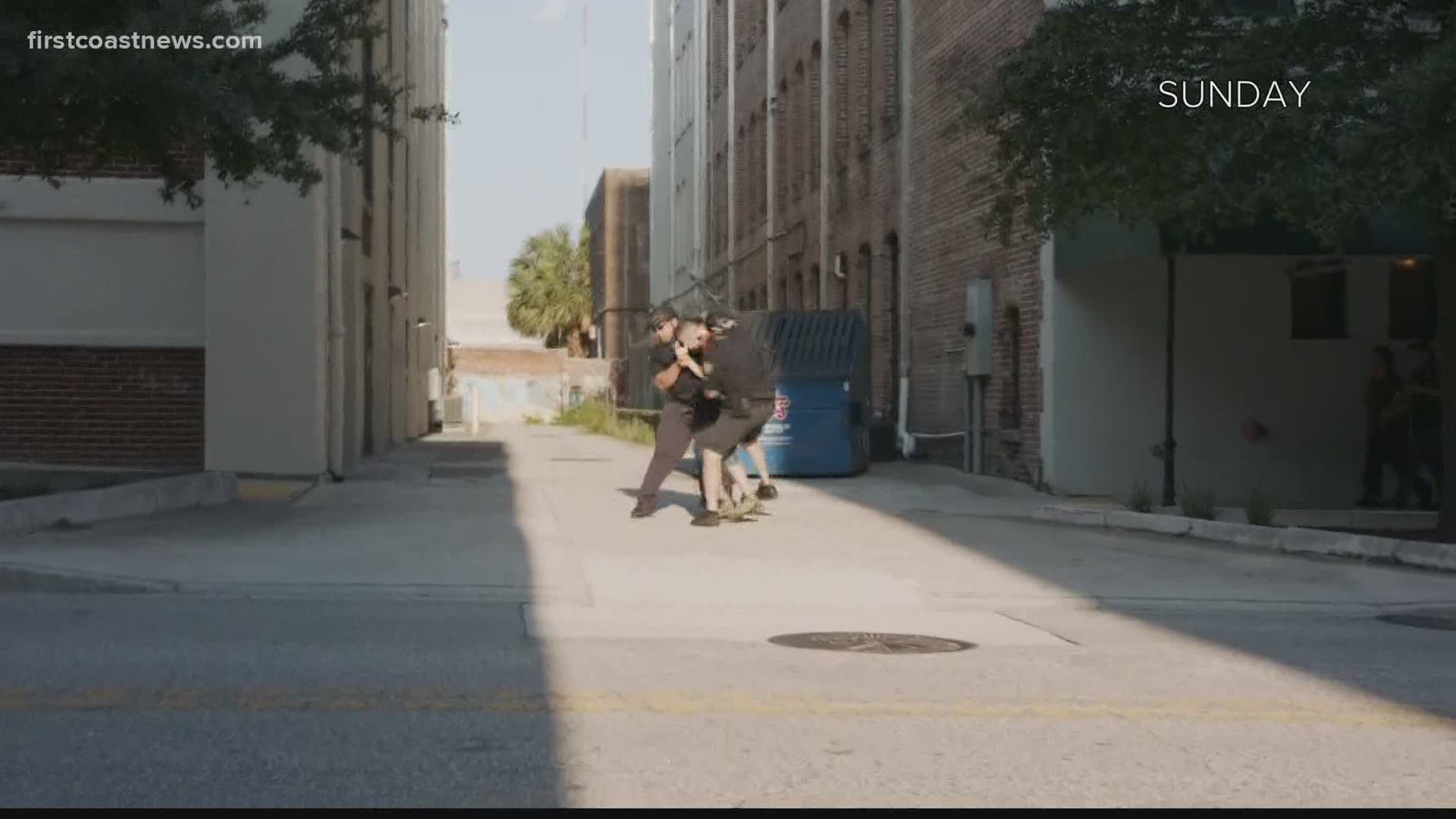 JACKSONVILLE, Fla. — About a hundred people held a peaceful protest on the Duval County Courthouse lawn Sunday afternoon. According to police orders, the protesters stayed on the sidewalk as they made their way through downtown, as seen in a video.

Shortly after 5 p.m., the scene changed and about a hundred or more officers in riot gear marched down the street and assembled in front of the courthouse.  As one officer announced over an intercom for everyone to disperse or else they would be arrested, a video shows chaos ensued and dozens of arrests were made, including that of Chad Hollett.

"They were in full riot gear, it was a scary situation," Hollett said. "I fell, and when I tried to get back up that’s when someone grabbed me."

Hollett said just moments before his arrest he asked the officers to join them in the protest, and that’s why he said he didn’t leave right away when they asked.

"You can see in the video they have their arm around my neck like a chokehold, while the other one ran up and punched me in the face," he said.

First Coast News asked the Jacksonville Sheriff's Office if the officers in the video crossed the lined and if Sheriff Mike Williams could comment on the incident.

JSO said the video is currently being "administratively reviewed".

Hollett was able to make bail thanks to funds from the Jacksonville Community Action Committee, which Hakeem Balogun has been a part of for several years.

"What I see is the continued militarization of police, they look like soldiers, that’s just not right," Balogun said.

This past weekend Balogun said the committee used their funds to post bond for more than 30 protesters in jail and confirmed the release of 27 Jacksonville residents who they believe all had their civil liberties violated.

"No one is talking about the fact that 3,500 people descended upon the sheriff’s office, when has that happened in the history of Jacksonville? This is a historic moment," Balogun said. "I hope the gatekeepers of Jacksonville are looking at our city and wondering where did we go wrong? Because people don’t assemble like that unless they’re angry, unless they feel like they haven’t been heard."

Balogun said they want to work this situation out with the sheriff, mayor and city council. He said they have "demands" they want met, which include having a Citizen Review Board for JSO and having body camera footage released of JSO shooting incidents.

On Tuesday, Sheriff Williams said they have to work lawfully with the State Attorney's Office to release body camera footage in a way that it does not jeopardize the investigation of a case. He said they hope to release some footage next week, but he does not believe that's what was at the root of this past weekend's protests.

“These events this weekend is not about body camera footage. Seventy cities around the country erupt in violence, and it’s not because of Jacksonville’s body camera policy," Williams said. “To people who want to see it released immediately: What if we released it and it impacted the case, and we did have an officer that had broken the law? And now there is no way that officer is going to get convicted because we released bodycam footage and we tainted the investigation."

A statement from the State Attorney’s Office echoed that position, saying:

“We will continue to release body-worn camera footage —as we always do — at the conclusion of an investigation or when we tender discovery in a pending criminal action. As a result of current events, we are reviewing our current practices.”

On Tuesday, Jacksonville Mayor Lenny Curry said he's proud that the majority of people were not able to be swayed by a few "bad actors" over the weekend.

Local pastors came out to the courthouse Tuesday to call for justice and reform.

"We are tired of being victims of a system that is not working for us, it's not working," said Reverend Anthony Beeks, with Mount Zion Missionary Baptist Church.

As for Hollett, he said he's now working with the Action Committee to get a lawyer. He has a court date set for July.

"I just want unity. I just want peace. I don't want to fight with anybody," he said.