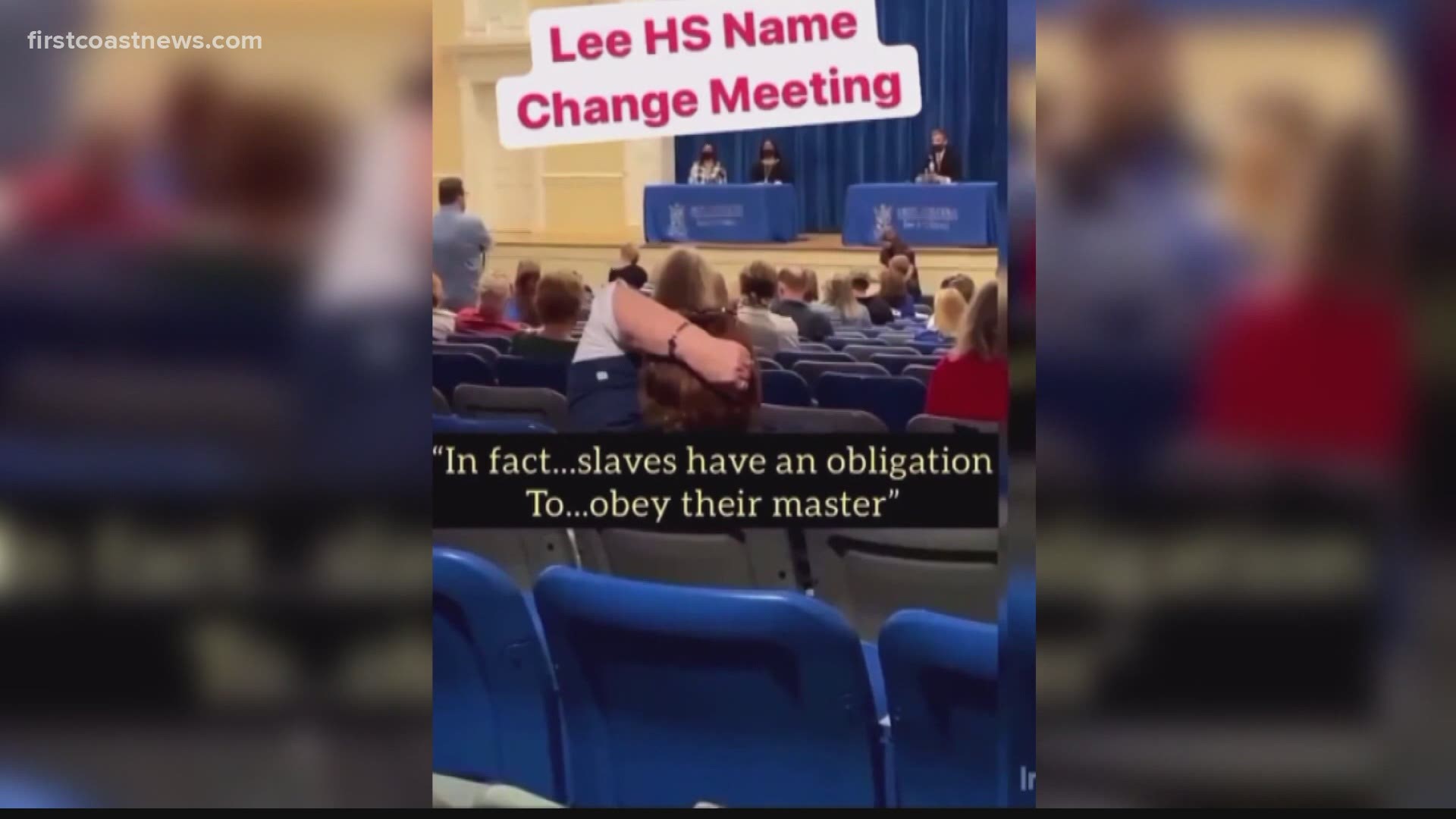 JACKSONVILLE, Fla. — Students spoke out Tuesday night at the fourth community meeting to discuss the possible renaming of Duval County’s Robert E. Lee High School – named after the commander of the Confederate States Army during the Civil War.

In fact, some students came for the very first time after a video posted by the student organization EVAC Movement went viral on Twitter. It shows alumni making controversial comments during the first three name change meetings at Lee, including:

“If this high school is having problems, how long has it been predominantly African American?”

Some comments even going this far:

"Slaves have an obligation to obey their master."

At a @DuvalSchools hearing about changing the name of Robert E. Lee High School in Jacksonville, Florida, one white man says “slaves are to obey their masters,” while another says “if there are problems at the school it’s because it is predominately African-American.” pic.twitter.com/nyg1cmRWRA

He said the video was one of the reasons he decided to take the mic at the meeting Tuesday night. He wanted to speak out for himself – and the future of his school, St. Louis explained.

“Someone told me I should, so I thought  I might as well get up there," he said. "Be the voice, be the change.”

St. Louis and other supporters of the name change say the names represent symbols of racism and that the ongoing discussions about renaming the schools are a difficult but necessary process.

However, many speakers against the name change say the process has caused more division. During the fourth community meeting, another alumnus choked up while he explained that changing the school’s name would mean changing his family’s memories after recently losing his better half.

“My wife went here ... her mother went here," he explained.

There is one more community meeting at Robert E. Lee High School Thursday, Mar. 25 at 6 p.m. before alternate names are selected for the ballot and the renaming polling begins.

Polling for these schools ends at the end of March. Polls are open for 10 school days between 10 a.m. and 6:30 p.m. Polling locations are at the schools in secure spaces that do not interfere with the school day.

As for who can vote, you can if you live within the school's attendance zone, if you're a student, a member of the Parent Teacher Association or School Advisory Council, school faculty or staff, or alumni.

Students as young as elementary school will be given the opportunity to cast their ballots during the school day outside of instructional time. The results from the voting process do not determine the new name of the school; the superintendent and school board take it from there.

See which school name you may be able to vote on here.