Verify: Why isn't the Austin Bomber being called a terrorist?

Many people have sent KVUE emails and posted to social media asking why the Austin bombings suspect has not been labeled a terrorist. KVUE's Jason Puckett explains in this Verify. 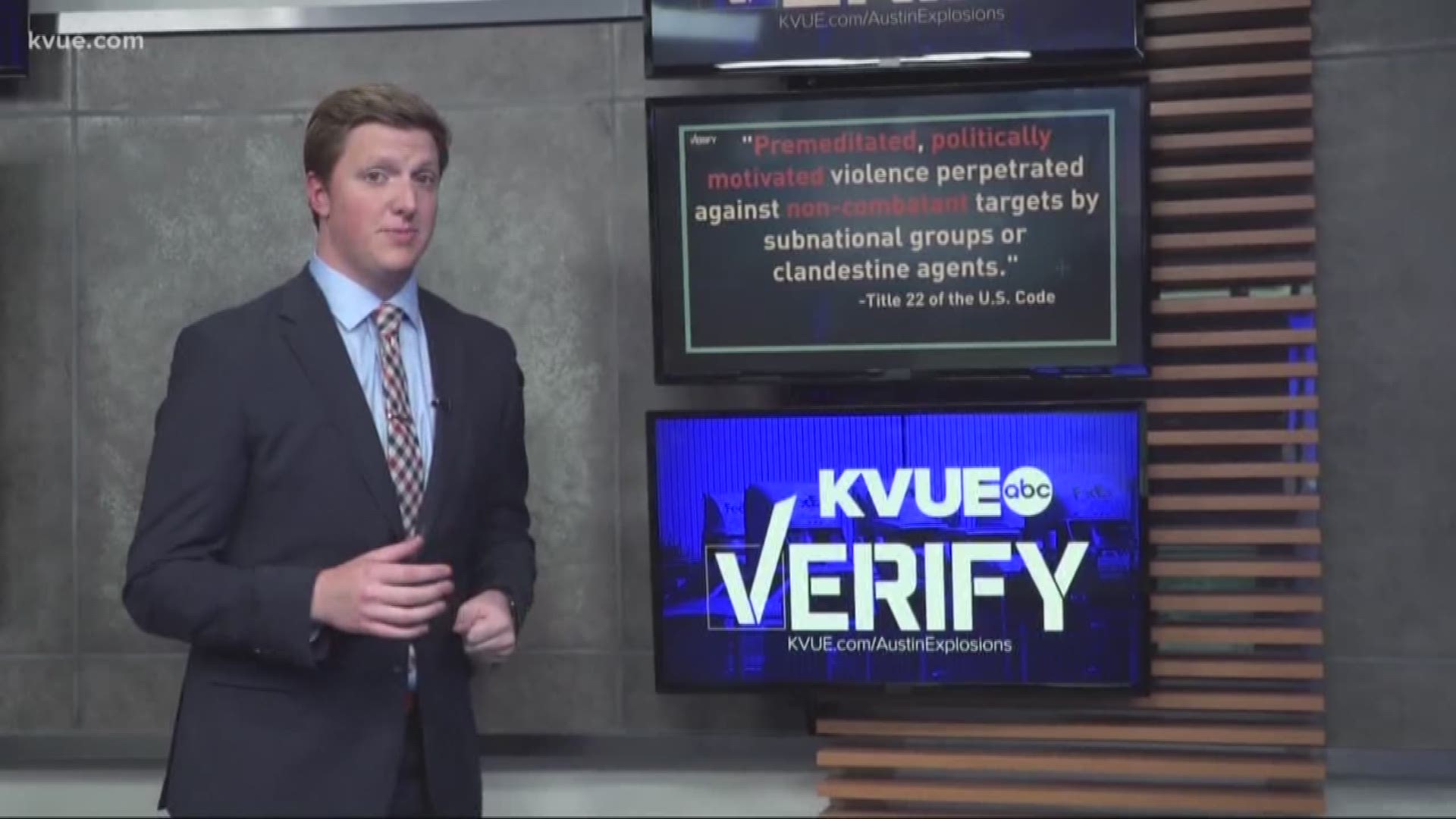 While Austin Police Interim Chief Brian Manley did use the word “terror” to describe the Austin bomber's actions in the community, no official in APD, ATF FBI or any other organization has officially called him a "terrorist" or his actions "terrorism."

Many viewers sent in emails and posted on social media asking why the suspect has not been labeled a terrorist.

Stratfor Chief Security Officer Fred Burton said part of the reason is the lack of an official definition of terrorism.

“There is no standardized definition,” he said. “Even if you look at the State Department, the Department of Justice up to the FBI.”

Take these three definitions for example:

The Austin bomber's actions certainly fulfill some of those requirements -- such as premeditation, attacks on civilians and the use of terror.

But as of March 22, motivations for his actions had not been confirmed.

Jeremi Suri, Professor of History and Public Affairs at the University of Texas, said we should be able to call him a terrorist regardless.

“So the experience for us living in Austin was the experience of living in a city under attack by a terrorist and we should call it that,” Suri said. “First of all to remind ourselves that the biggest threat we face is not from someone coming from abroad, it’s from the problems and issues we have within.”

Suri said that typically, terrorism has a political or ideological agenda associated and said he thinks the suspect’s past conservative blog posts could hint at one.

“What we saw in Austin in the past couple of weeks was an act of terrorism,” Suri said. “This was an individual who, even though, he didn’t belong to a political organization, clearly had certain political viewpoints.”

Burton pointed out that while officials had not used the terrorism word, they had acted like it was a terroristic-threat.

“All the tools in the counter-terrorism toolkit were all deployed to find this bomber,” Burton said. “ You don’t know what’s driving this. You don’t know who’s going to be next. Therefore you have to operate under the assumption that it is terrorism.”

While Burton acknowledged that it’s possible the Austin bombing suspect would’ve been tried under a different crime like the Weapons of Mass Destruction Statutes, he said he still personally believes the suspect was a terrorist.

“Having been a working counter terrorism agent,” Burton said. “I’m operating throughout this investigation that this was terrorism until proven otherwise...At the end of the day, I think he terrorized our city and I certainly would call him a domestic terrorist.”

The suspect's official motivations are still unknown by March 22, but his actions fit the description -- he was premeditated, he targeted civilians and caused terror in the community.

Thus, KVUE can verify his actions fulfill the definitions of terrorism.

However, KVUE believes it’s the job of law enforcement to officially define it as such.