According to an email obtained by First Coast News, UNF emailed all fraternity and sorority students on February 1 banning on-campus tailgating before athletic events. 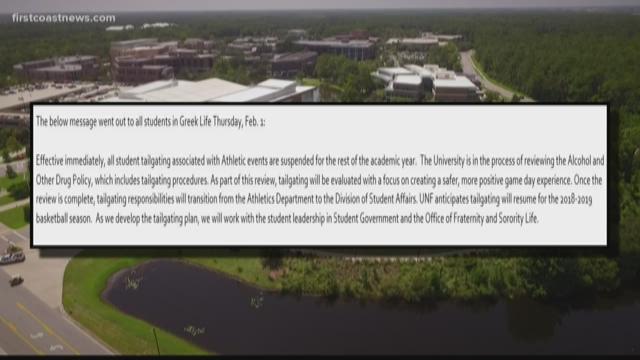 JACKSONVILLE, Fla. - Too much booze, underage drinking and swallowing a goldfish. These are the reasons why there isn’t anymore tailgating at the University of North Florida (UNF).

UNF officially banned student tailgating, focusing on fraternities and sororities, for the remainder of the school year. The ban was prompted after a student was transported from an Osprey men’s basketball pre-game tailgate last week, according to UNF’s Associate Vice President of Student Affairs Everett Malcolm.

“We did have an alcohol transport a week ago,” Malcolm said. ”If you have one transport, you have the potential for others.”

He said safety concerns like underage drinking have prompted the ban.

“It is always best to be proactive than reactive…what we don’t want to see is an alcohol poising on our
campus. We want our students to have fun. We want them to cheer our student athletes on in a very safe way,” Malcolm said.

According to an email obtained by First Coast News, UNF emailed all fraternity and sorority students on February 1 banning on-campus tailgating before athletic events. UNF alumni will still be allowed to tailgate on campus this year.

"Effective immediately, all student tailgating associated with athletic events are suspended for the rest of the academic year. The University is in the process of reviewing the Alcohol and Other Drug Policy, which includes tailgating procedures," the email said. "As part of this review, tailgating will be evaluated with a focus on creating a safer, more positive game day experience. Once the review is complete, tailgating responsibilities will transition from the Athletics Department to the Division of Student Affairs. UNF anticipates tailgating will resume for the 2018-2019 basketball season. As we develop the tailgating plan, we will work with the student leadership in Student Government and the Office of Fraternity and Sorority Life."

“Tailgating, by definition, is probably not what is going on,” UNF athletic director Lee Moon told our news partners, the Florida Times-Union. “There were some issues going on that had to be addressed that were very critical and things that were going on that needed to be straightened out.” According to the TU, “Moon said more than 1,000 students are typically at each tailgate — branded as “Swoop-gating,” the tailgates are held in Lot 18 near the school’s athletic facilities — but often only about 200 tailgaters come in.”

“The rest of them stay out there and drink,” Moon told the TU. “That’s not what tailgating is, not what it should be. It should be about school spirit.”

UNF’s Division of Student Affairs will take over handling the tailgates. UNF officials expect tailgating to resume next school year. Malcom said the university will meet with the fraternities and sororities leadership to discuss ways to make tailgating safer in the coming weeks.

"It’s not a lot of reason to show up to the game if there isn’t any tailgating,” UNF senior Richard Jackson said.

UNF said however, when the tailgates do return they will be safer.

“With the growth in the number of students coming to our tailgates, which is nice, we really need to define the space and how tailgating occurs,” Malcolm said.

“We want our parents to have peace of mind,” Malcolm said. “I have three daughters and all of which attended college. I wanted the peace of mind that my girls were safe. We want parents of students who
attend UNF to have that same peace of mind.”