Parker Rowley and Luke Kennedy were inseparable. The two were killed in an October crash that shattered the lives of their families and the community. 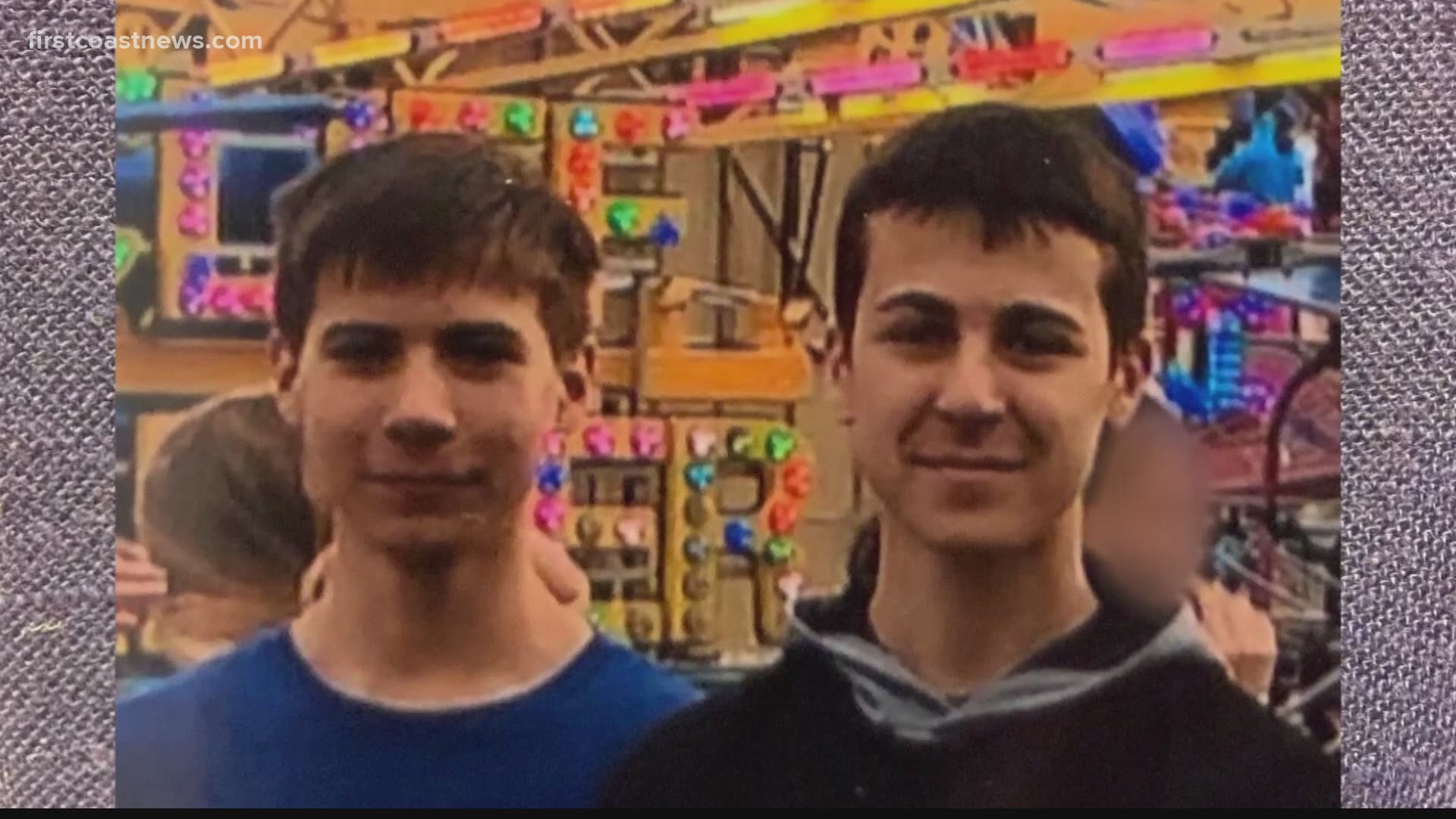 ST. AUGUSTINE, Fla. — The known and unknown circumstances surrounding a tragic crash that took the lives of two Middleburg best friends still linger over their families, who months later, remain on a search for justice, closure and healing.

Parker Rowley, 17, and Luke Kennedy, 16, were, as their families describe as "inseparable."

"They were like the perfect halves of each other," explained Kathleen Kennedy, Luke's Kennedy mother. "Separate they were amazing too, but together they were just unstoppable."

The night of Oct. 9, a Friday, would forever change the lives of the Rowley and Kennedy families who were neighbors in Middleburg.

Troy and Richelle Rowley, Parker Rowley's parents, were home watching their kids and some of their friends having a sleepover when he told his dad he and Luke Kennedy were going to get dinner in St. Augustine.

"The boys had a lot of freedom, because they earned it. We could trust them," Richelle Rowley said. "They were good boys."

Luke Kennedy's parents were home down the street, and he let his dad Steve Kennedy know that he was going to dinner with Parker.

With Luke Kennedy behind the wheel, the two friends drove to get food.

Parker Rowley, the oldest of four, met Luke when the Rowley family moved into the Kennedy family's neighborhood in 2013.

When the two met, a deep and unique friendship formed quickly.

"[Luke] was another son to us. And to Parker Rowley, they were brothers," said Richelle Rowley. "They were the best together, they completed each other's personalities almost."

Both boys loved being outside and shared a common passion for airsoft, even going so far as to start work on their own airsoft gun repair business.

Luke Kennedy, the baby of his family, like Parker Rowley, was a giving person, his parents said.

Both the Kennedy's and the Rowley's said the boys were, above all, honest and hard-working. They said there was never a concern about giving them the freedom to go places together because they were responsible.

"If you're going to hope for a friendship for your kids, that's what you want," Richelle said.

As the boys were heading home from their dinner outing, Richelle Rowley called her son to check in on them.

Parker had texted his mom just after 8 p.m. to let her know they had stopped for gas and were on their way back, driving west on State Road 16 in St. Johns County.

During the call, the line abruptly went dead.

"There was a clicking on the line, and I thought that maybe he had dropped the phone or fumbled the phone. I never heard any indication at all that they knew they were about to be hit," Richelle Rowley said.

"I listened and had this sinking feeling that something wasn't right."

She said she dismissed her uneasy feeling and went back to start putting to bed the kids who were staying over.

When 9:30 p.m. rolled around, Parker and Luke still were not home.

Richelle Rowley said she had been tracking Parker's phone throughout the night, and noticed the phone had stopped at the intersection of State Road 16 and South Francis Road.

She called a friend who lived next to the intersection.

"He said he saw flashing lights, police tape up," she said.

While she was on the phone, Richelle Rowley's friend put her on with an investigator at the scene.

"I said, 'Where are my boys? Are they there?' And he said, 'I'm sorry, I can't tell you anything. It's a crime scene.' And at that moment when he said that, knowing I couldn't get a hold of them and he wouldn't tell me anything, I knew our boys were gone," Richelle said.

She, Troy and Steve rushed to the intersection.

"It was probably the longest 35 minutes of our life trying to get over there," she said. "It just seemed like running in a dream."

When they arrived, the three ducked under the police caution tape to rush toward the crash, investigators then stopping them.

The investigators told the three that Parker had died at the scene.

Steve was told Luke had been taken to Baptist Health South, and to get to the hospital as soon as he could.

Credit: WTLV
Luke Kennedy standing next to a dirt bike.

When he learned of the extent of Luke's injuries, he knew his son wouldn't make it.

"I knew that there was no coming back from what had happened," Steve said.

Luke would be taken to Wolfson Children's Hospital in Downtown Jacksonville, where he would die.

Kathleen Kennedy said her son, an organ donor, gave organs to six people after his passing.

"A punch in the gut"

As reports of the crash began to be reported by media outlets, including First Coast News, Kathleen said she was shocked to hear how the crash was being portrayed.

The original press release by the Florida Highway Patrol stated that the vehicle Luke was driving was heading east on State Road 16 when it veered into the opposite lane, colliding with a 42-year-old woman driving a pick-up westbound.

"Hearing that he was at fault was heartbreaking," Kathleen said.

Steve described it as "a punch in the gut," and difficult to fathom considering how safe both Luke and Parker were when on the road.

But the release was inaccurate, in a major way: Luke and Parker were heading back to Middleburg, driving west. Richelle knew because of her ability to track Parker.

"When I first read that, I thought, 'I know this isn't right. This can't be right,'" Richelle said.

"We had to convince [FHP] that they were wrong," Troy Rowley said.

According to both families, investigators said the woman driving the other vehicle gave a false account of what happened, which is reflected in an updated FHP crash report.

The updated report notes the woman was driving south on South Francis Road, and "violated the right-of-way." And a witness nearby told First Coast News he saw the pick-up truck run the stop sign at the intersection.

"Since she did lie to them, they had to take her word for it, and from the evidence, they could see in the dark on the scene that night, that's what it looked like to them," Troy said.

"It's bad enough to take our boys from us, but to try and pin it on them and make it their fault so she can walk off scot free.. it's disgusting really," Richelle said.

The new description of how events unfolded was some relief for the Kennedy's, who no longer had to live with the burden of thinking Luke was responsible for the crash.

Steve said he owes Troy and Richelle for pushing for the truth.

"Both of them pushed to get Luke cleared, even though they lost their child too," he said.

"She took something from us."

The woman at fault in the crash, who is not named in the crash report obtained by On Your Side, refused to take a drug or alcohol test when asked by investigators on scene.

Florida state law allows her to do so, even though there were fatalities.

"If [investigators] had no indication of impairment, that would limit any ability to seek evidence based on that ground," said Susan Cohen, a Jacksonville DUI attorney for Epstein & Robbins.

Cohen said, under Florida law, investigators need two factors in order to force someone to provide a drug or alcohol test: the driver must be at fault, and there must be obvious signs of impairment.

"If there is no indication that they were impaired by alcohol or a controlled substance, there is no basis whatsoever to compel a blood test," she said.

As far as investigators on scene that Friday night was aware, the 42-year-old driver was not at fault, and the evidence on hand at that dark intersection seemed to support her lie, the families said.

"[Investigators] said there was no indication that she was under the influence of anything, so they could not require her to give a sample," Richelle said. "I know that if it were me in that situation and I were innocent, I would have been willing to give anything and everything I could have to help the investigation."

Searching for the Truth

It remains unclear whether charges will be pressed against the driver at fault. FHP could still recommend charges to the State's Attorney's Office.

Meanwhile, the Rowley family has brought on a law firm to file a wrongful death civil suit against the driver, who will be deposed.

Both sets of parents said, ultimately, they want to know the truth of what happened that night.

And while they want the memory of their children to stay alive, they also hope that their deaths will push people to drive more carefully: to slow down, watch for others and obey basic traffic laws, like stop signs.

"When you go to dinner and you decide to have a glass of wine and you think you're okay to drive home, something as simple as that can put a family like ours in this situation," Richelle said. "In an instant you can cause irreparable harm to two families, an entire community, over your selfishness."