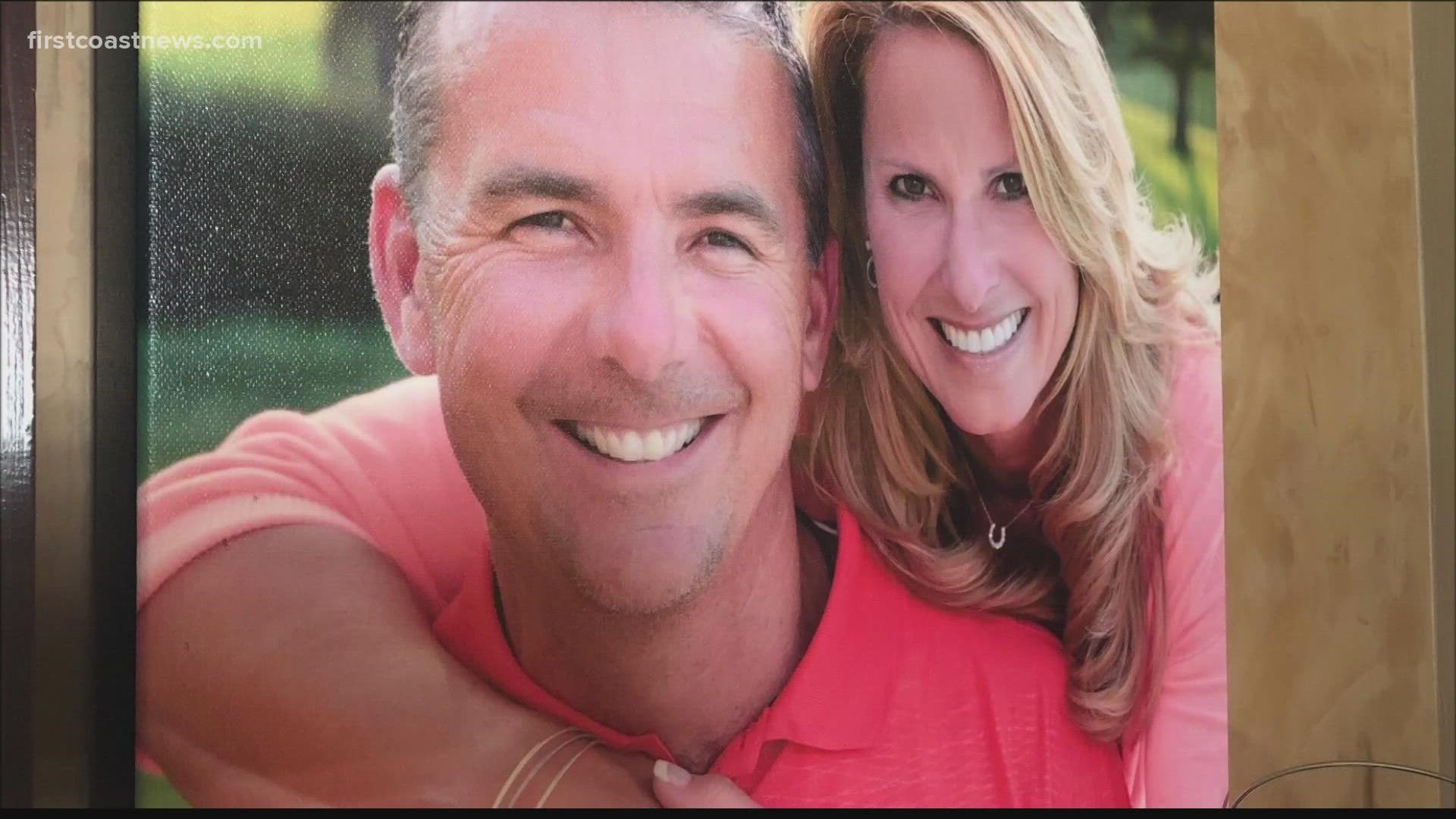 JACKSONVILLE, Fla. — "It's just so sweet to see Urban like that because he's so stoic and intense. You get grandchildren and everything changes,"  says Shelley Meyer, fighting back tears.

Her husband, the new Jacksonville Jaguars head coach Urban Meyer, now has two grandsons and a granddaughter on the way.

His wife, Shelley, invited us into her home, so you can get to know the family a bit better.

Up on a kitchen wall is a sign that reads, "Mimi and Buddy," the names their grandchildren call them.

Shelley, a nurse who's just been hired by UNF to teach a clinical in the hospital about mental health to nursing students, talks with great passion about life -- with tears and with chuckles.

First, the fun side.  How did they meet? She says it was at a Sigma Chi Derby Day party in college. She was a Zeta Tau Alpha and attended a game night. The idea was to make a frat member smile without touching them.

"This was hilarious. I got a Playboy -- my first and only one I've ever bought -- and I walked by the guys and opened the centerfold and said, 'Does this look like me?'"

It was all just a quick bit of fun.  But standing by a set of stairs was a young Urban Meyer.

He caught her attention. She caught his.

Later, she says, she learned the name carries great respect, from the names of several Popes, and the legacy in her husband's family of three generations.

She and her husband moved into their home in Jacksonville near UNF on May 1st.  She says it was the home of former Jaguars quarterback, David Garrard. "I thought you might find that interesting," she says. "He did a beautiful job on this house."

When you first walk in the front door, you notice a huge, round table with rows and rows of family pictures, perfectly in lines. You might think a designer did all the decorating, but no.

She says he placed every single picture in its place on tables and the walls in the house. And in his new home office, he chose the spots for all of his championship footballs

Even on the kitchen walls there are photographs showing happy family times with their two daughters and their son.

Shelley says her husband has a strict morning routine. "He literally gets up at 5:15 and throws on his clothes."

She says he goes to his office at TIAA Bank Field and has breakfast and does his devotional.  He sends that devotional out to his family members.

Shelley gets her phone to show the latest devotional from her husband.  It comes from Psalm 19:14:

"Let the words of my mouth and the meditation of my heart  be acceptable in your sight,  O Lord, my strength and my redeemer."

She says, "I don't know how we could have made it through some of the things we've been through without God and His love and support."

A sign saying, "JESUS" is placed high up in their kitchen. She says her husband's messages every morning "remind me our strength is in the Lord, not us. I'd be a mess if I relied on myself."

Outside in their pool, Shelley has enormous pink flamingos floating.  She says her friends who follow her on Twitter know she's crazy about flamingos. "They're fun," she says. "Do you know what a group of flamingos is called?" she asks.

Turns out it's not a flock.  It's a flamboyance. A bit of trivia to make you smile.

The Meyers plan to get involved with various non-profits on the First Coast, including ones working to combat human trafficking and to fight cancer. In Ohio, their Urban and Shelley Meyer Cancer Fund raised three million dollars for cancer equipment and treatment, despite the pandemic and an event crowd of 1,000 rather than the typical 3,000 people.

As for this Jaguars season, Shelley says she knows the team has a big challenge ahead.  And she believes she's ready to be a strong supporter.

"I'm excited Jacksonville is excited. It made me feel good that people were excited to have Urban here."

So cool to be invited into the home of Shelley and Urban Meyer. Thought you’d like to see inside the home of the...