Pest Control experts say termites are swarming early and it is due in part to the warm weather. 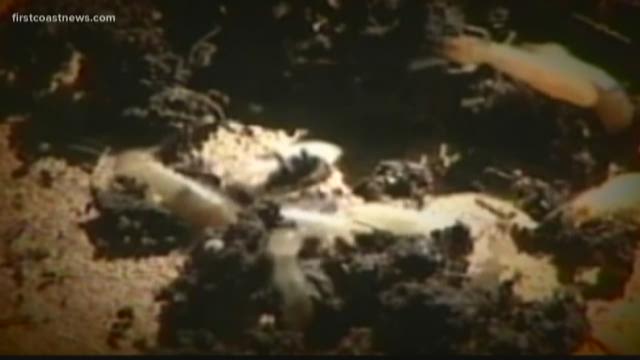 JACKSONVILLE, Fla. -- A week ago, Alicia Taylor walked into her Northwest Jacksonville apartment and could not believe what she saw: there were termites swarming everywhere.

"It is disgusting and I told the landlord," she said.

Unfortunately, she is not the only person complaining. Pest Control experts say termites are swarming early and it is due in part to the warm weather.

"They swarm not based on the calendar, they swarm based on temperature and moisture," said David Cooksey from McCall Service.

Cooksey said while it is disgusting, don't panic because the termites are looking for a new place to live, which means they may have already done their damage.

"Whatever they're done, they've done," he said. "Hopefully, you caught them early."

Cooksey said if termites are swarming in your home, it is too late to protect your home from the critters.

"If they're swarming inside your house you have damage, it is just a matter of how much," he said.

The subterranean is the most common termite, a mud tunnel on the walls of your home is their trademark, but there are Drywood and Formosan termites.

"A colony of Formosan can eat almost pound of wood a day," he said.

He said the Formosan is a major concern and they're seeing more of them.

"They do almost a billion dollars a year just by themselves," Cooksey said.

Cooksey said getting rid of the homewreckers is not a job for the do-it-yourself person, but he admits to hire a professional can cost more than $800 to begin treatment.

His final words may not bring comfort but it is a reality. He said if you don't have termites, they're not too far away.

"You either have termites, you have had termites or you will get termites if you live in Florida," he said.

Cooksey said there are three things you can do to minimize your exposure to the pesky critters:

1) Remove woodpiles from around your home

2) Be sure to direct water runoff away from your foundation

3) Be sure that the siding on your clears the grade. There should be a space of at least six inches between the soil and the siding.