JACKSONVILLE, Fla. - State Attorney Melissa Nelson will not prosecute the Jacksonville Sheriff’s Officer who shot and killed 22-year-old Vernell Bing, Jr. in 2016.Ronald Kurpiers, attorney for Bing’s family, told First Coast News he was notified of Nelson’s decision earlier Monday. He said he is “disappointed” in the decision, but that the family will continue to press their civil case in federal court. 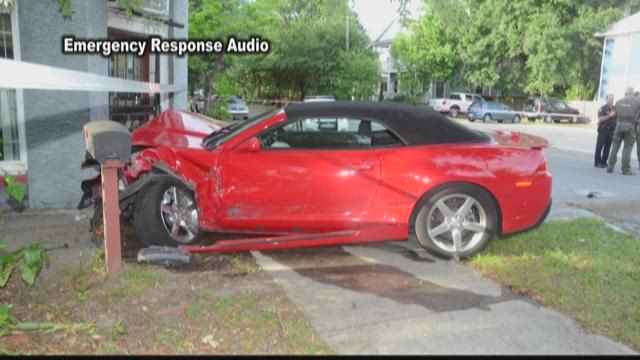 Ronald Kurpiers, attorney for Bing’s family, told First Coast News he was notified of Nelson’s decision earlier Monday. He said he is “disappointed” in the decision, but that the family will continue to press their civil case in federal court.

"While I’m sure folks l are going to be very disappointed, very frustrated, that here is another criminal case of a police shooting of a young black man on the streets of Jacksonville, I can tell you we intend -- if they didn’t criminally -- we intend to hold him accountable civilly," Kurpiers said.

Bing was shot in the head by officer Tyler Landreville after a car chase in May 2016.

According to reports, Bing was found in a red Chevy Camaro along MLK Parkway that was wanted in connection to an April 2016 shooting. JSO pursued Bing before he crashed into an officer's car on East 9th Street in Springfield.

Audio recordings from JSO Emergency Response released by the State Attorney's office include a caller describing Bing's the red Camaro as going at "high rates of speed and driving erratically." The caller also tells JSO the car is the one they were looking for from a shooting.

Dash camera video and audio from police radios showed multiple units joining in on the pursuit of Bing in the vehicle. One officer estimated Bing was going up to 150 mph at times.

A re-enactment video created by investigators shows Bing traveling on East 9th Street as Officer Landreville turned onto the street from North Liberty Street. The collision left both vehicles mangled on opposite sides of the street. Officers on the scene reported shots fired after both the officer and Bing had exited their vehicles.

Police reports said that Landreville shot at Bing five times, but was struck once in the head.

Some witnesses said Bing appeared to be walking away from the officer when he was shot multiple times. The case drew widespread attention and protests, prompting Sheriff Mike Williams to ask the FBI to review the case.

READ MORE: Jacksonville cop who shot and killed unarmed man is back on patrol

First Coast News' crime analyst Mark Baughman said when a suspect is believed to be armed, even if the suspect is fleeing, an officer can act to protect the public.

"[Bing] posed a danger to the public in light of what he did with the car," said Baughman. "As he was running he made a motion to his waistband that the officer observed. This was a veteran officer who knew that the car had been associated with some kind of violence [from the April 2016 shooting]."

Kurpiers praised the State Attorney's transparency in releasing a large volume of documents in the case.

“We’ve been stymied by JSO, so we’re just glad to get information,” he said.

A social media video of a man claiming to have witnessed the shooting was included in the State Attorney's evidence release.

The man speaks into a cell phone camera stating he saw an officer shoot a man in the back and then several more times after the man was on the ground.

Investigators used other surveillance video from nearby homes to discredit the witness, determining the man was too far away at the time of the shooting to have seen what happened.

The State Attorney's Bing Death Investigation report says the following about the decision not to pursue charges:

We will never fully know what Vernell Bing’s intentions were on that fateful day. Did he plan to just escape and do nothing? Was he in pain and grabbing his injured left hip? Did he motion to his waist on purpose? Was it a simple miscalculation? Was he trying to taunt the officer he just rammed? Was he trying to end it all with assistance from the police? Or was there some other reason motivating his action?

What we do know is that Bing’s actions left no doubt in the mind of Officer Landreville that Bing was an immediate threat to him and an imminent threat to others. Every mile Bing fled and every second Bing drove was one more opportunity to pull over and surrender to lawful commands to stop. Bing chose to do otherwise. Bing’s actions and Bing’s choices are what gave rise to Landreville’s decision to shoot.

Based on the available facts we have reviewed and our review of applicable Florida law, it is our legal opinion that the actions of Officer Landreville on May 22, 2016, were justified, as defined by Florida law. We will, therefore, take no further action in this matter.

First Coast News reached out to JSO but have not yet heard back.

1 / 7
The JSO officer who shot, killed Vernell Bing Jr. was said to have shot at Bing five times, but one bullet struck him in the head. Photo: State Attorney's Office.

The Fraternal Order of Police released a statement:

"We were very confident throughout this entire process that Ofc. Landreville would receive this ruling. We remain thankful that the officer was not seriously harmed while attempting to bring a violent suspect into custody. I would personally like to thank Melissa Nelson and her office for the thorough review of this incident and for releasing a finding that is consistent with the evidence in this case."