ST. AUGUSTINE, Fla. -- Archeologists discover human skeletons in St. Augustine during a dig. The bones could belong to the first colonists of St. Augustine, dating to the 1500's.

ST. AUGUSTINE, Fla. – When Hurricane Matthew brisked by the First Coast last October, it left quite a bit of damage to the city of St. Augustine.

One such place was a building called Fiesta Mall, the two-story yellow building with the A1A Aleworks located in the downtown area. The building’s owner, David White, decided to renovate one of its store fronts and replace its damaged floor. White also invited the city’s archeologist, Carl Halbirt, to dig up the floor despite Halbirt being skeptical that they’d find anything.

While shoveling away the dirt, however, Halbirt made a startling discovery: Four skeletons that may belong to the nation’s first colonists.

Four skeletal remains were discovered at Fiesta Mall in St. Augustine. They are believed to belong to some of the nation&#39;s earliest settlers. Photo: FCN.

St. Augustine is rich in history. The city has existed for more than 450 years, becoming the oldest continuously European occupied city in the United States. It was founded by Spanish conquistador, Pedro Menendez de Aviles, in 1565, which is 42 years before the English colony at Jamestown, Virginia and 55 years before the Pilgrims landed on Plymouth Rock in Massachusetts. Today, it is known as "the nation's oldest city."

“It’s (also) the oldest parish church that has been documented in the United States,” Halbirt said.

It was destroyed three times: 1586 during a raid by Sir Francis Drake, 1599 by a fire and hurricane, and in 1702 when the British burned it to the ground, according to the St. Augustine Record.

Halbirt believes the bodies were buried at this location, under the church’s floor. Back then, "it was standard procedures for Catholics" to be buried under the church floor, Halbirt said. It was considered sacred and holy ground.

“The mission churches across Florida buried everybody in the church floor,” said Ellsbeth “Buff” Gordon, an architectural historian. “It was consecrated ground, of course.”

DIGGING UP THE GRAVES

Jessica Clark holds some of the newly discovered remains found at Fiesta Mall in St. Augustine, including teeth. Archaeologists say several skulls, an intact skeleton, and a &quot;very nice set of teeth&quot; were found. Photo: FCN.

Halbirt and his team discovered the four skeletal remains last week. He says they look like they are adults. They believe they belonged to “some of the earliest colonists in St. Augustine history” based on the pottery and ceramics found near the bones. His team estimates that the bodies were buried sometime between 1572 and 1586, just 20 years after St. Augustine was founded.

“This definitely could (also) be some of the first Europeans to settle in North America,” Gordon added.

Their first discovery was the right elbow of a human skeleton. Upon digging, they discovered that it was an intact skeleton, complete with a skull and a “very nice set of teeth." The crew found a second skull very close to the first.

Outside of the building on Charlotte Street, they found the leg and a skull from a third and a fourth grave.

On Wednesday, Halbirt said they may have found six additional bodies. He said the soil nearby was discolored or “stained,” indicating that they might be additional graves. 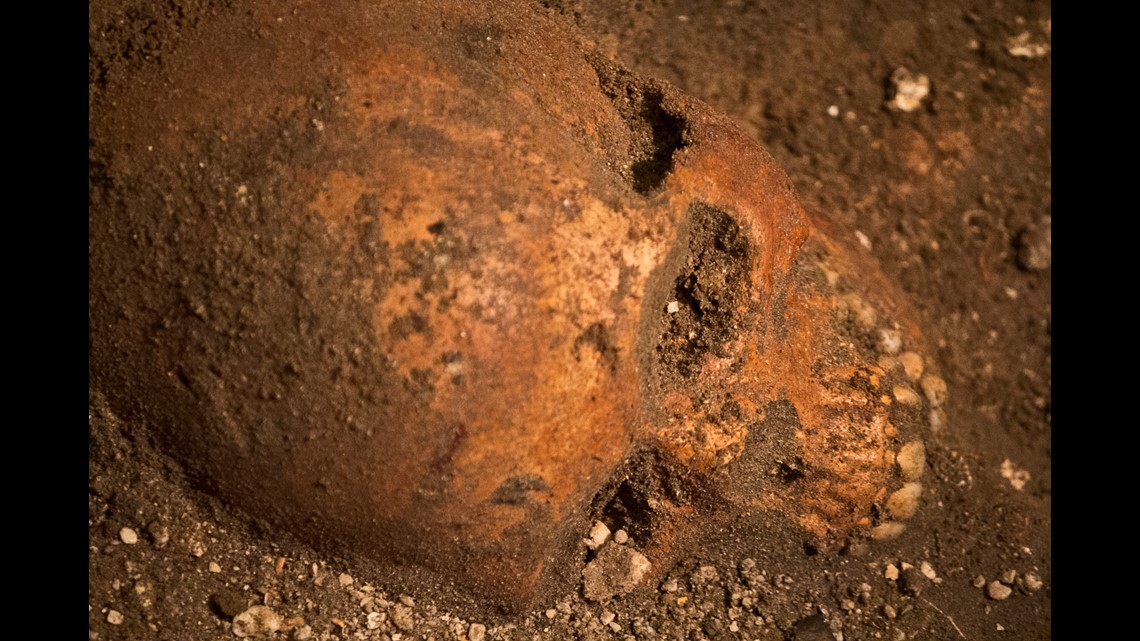 “What you’re dealing with is people who made St. Augustine what it is,” Halbirt said. “You’re in total awe. You want to treat everything with respect and we are.”

Archaeologists say they found two additional bodies outside of the Fiesta Mall building in St. Augustine&#39;s downtown area. These bodies will be removed and transported to a Catholic cemetery, says Carl Halbirt, the city&#39;s archaeologists. Photo: FCN

Halbirt says to maintain that respect, they will not remove the bodies inside of the building. The bodies found outside of the building, however, will be removed because the city water line will go through that area, which could disturb and destroy the bones. He said they will be reburied in the Tolomato Cemetery, which is a historic Catholic cemetery.

History unearthed: How newly discovered skeletons may be the first colonists of St. Augustine