St. Augustine Beach dunes believed to be damaged by bulldozers for 'ocean view'

The city believes the dunes were bulldozed to give someone an ocean view near 12th Lane in St. Augustine Beach. Police said this type of dune destruction could lead to a first-degree misdemeanor. 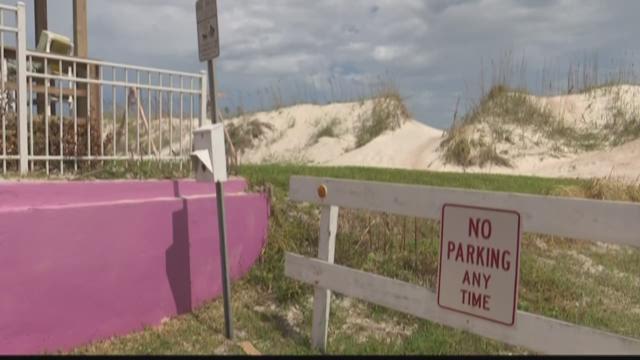 ST. AUGUSTINE BEACH, Fla. -- There is now a large gap in one of the protective dunes along a St. Johns County Beach.

The city believes the dunes were bulldozed to give someone an ocean view near 12th Lane in St. Augustine Beach. Police said this type of dune destruction could lead to a first-degree misdemeanor.

According to a St. Augustine Beach police report, about a half-dozen feet of sand was cut out of this dune. Now neighbors worry about their homes which are normally protected by an intact dune.

"If you do that, the sea comes through," Bill Holcomb said.

The results of removing a section of the dune are pretty obvious for Bill Holcomb, who lives nearby.

According to the police report, a witness spotted bulldozers near the dunes last week. That witness said he tried to talk to the operator, but they loaded up and left.

"Not really the thing you should be doing, with a Bobcat," Holcomb said.

Baxter told police he witnessed Grace Grimes, who owns the property right in front of the damaged dunes, speaking with a construction crew regarding work behind her home.

Grimes denied causing the damage, telling police she did not know who could have done that.

First Coast News reached out to Grimes for comment, but she refused to talk.

"We just had a hurricane, it blew a lot of things around so it's a bit silly of someone to take it upon themselves to do this though," Holcomb said.

Holcomb doesn't know how someone could do something like this right after Hurricane Irma.

"If everybody did that, there'd be no sand dune left because everyone would want to see the beach instead of the end of a sand hill, but that's what it's there for," Holcomb said.