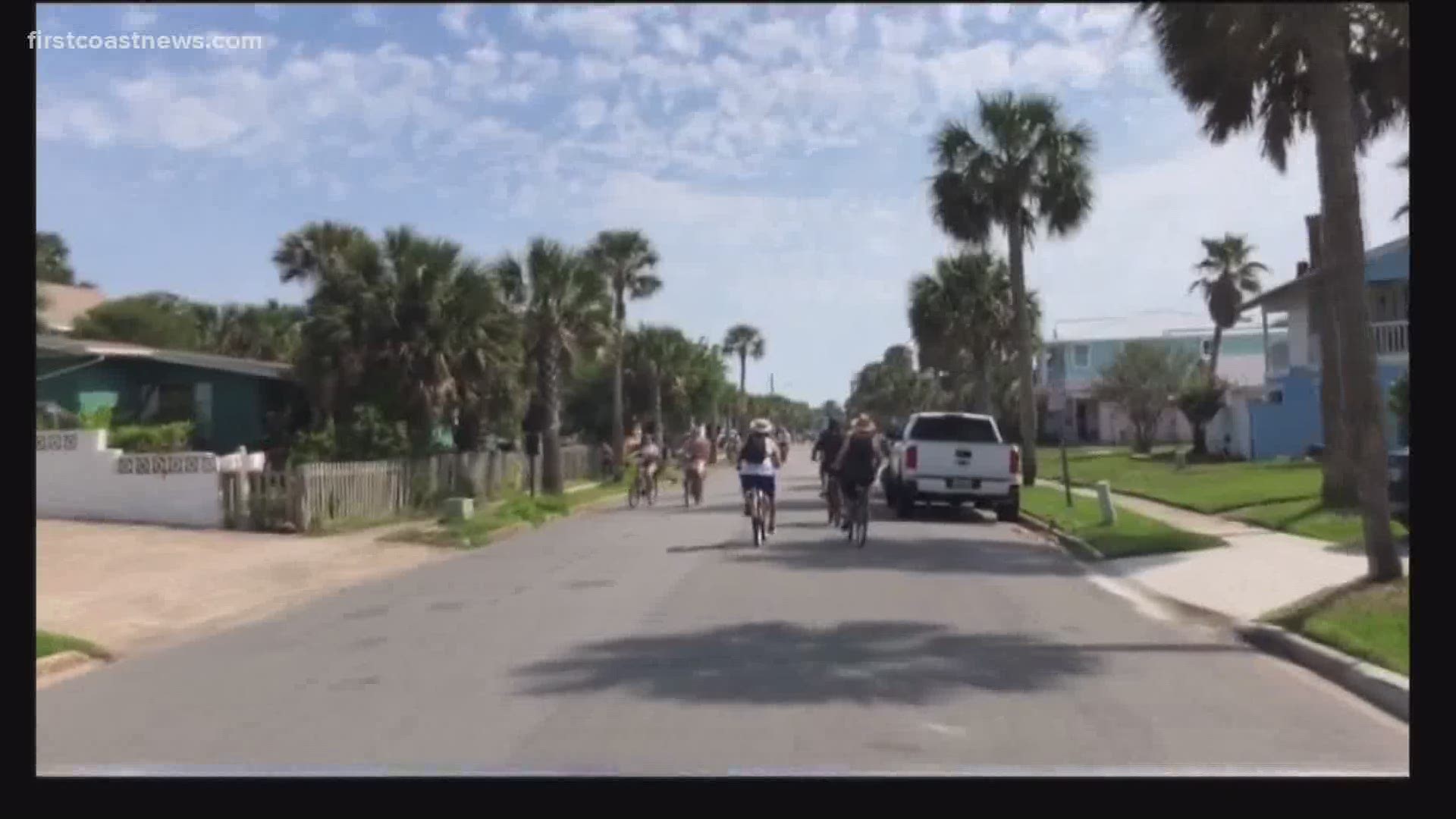 ST. JOHNS COUNTY, Fla. — A full week after closing its beaches, St. Johns County is getting rumbling from many residents who say the closure is defeating the purpose of social distancing in other places.

“They’re getting closer walking on the sidewalks of A1A than if they were to walk on the beach,” longtime St. Augustine Beach resident Carl Gill told First Coast News. He said he’d seen in just the first few days after the beach ban began.

Gill’s observation in his hometown seemed to manifest in other beachside communities such as Neptune Beach.

Saturday, a video sent in by a First Coast News viewer showed hordes of pedestrians and bicyclists there passing one another, often in apparently closer proximity than the minimum six feet urged by the CDC.

“We just had to take this week or two and kind of get it behind us and establish the baseline that our beaches are closed,” he said. Any subtlety that he’s open to easing restrictions was very quickly made overt.

“I am in favor of relaxing some of the restrictions on our beaches,” he said. “And I think you’ll hear the same thing coming from some of my fellow commissioners and some of the county commissioners."

While Hardwick isn’t in a position to make decisions binding on the county, he offered a glimpse of what he had in mind.

“I would be a fan of opening our beaches from – let’s just say sunrise until 10 o’clock in the morning time, to at least get started,” he offered, adding that, given the authority, he’d weigh other restrictions such as limiting access to county residents.

That latter point seemed to strike a chord with Gill, who claimed that it was visitors displaced by other counties’ closures that had been the tipping point causing St. Johns County leaders to follow suit.

“That killed it,” he said. “The Mickler Beach that we saw on TV on [March 28], I think, sent the message to St. Johns County administrators.”

Gill’s claim seemed bolstered by photos showing crowds of people at Mickler’s Landing in Ponte Vedra, right up to the border shared with Duval County. Rarely has an invisible boundary looked so obvious.

Hardwick corroborated Gill’s general contention, acknowledging that during the weekend when the closure began, “traffic violations, parking violations in St. Johns County – not just my jurisdiction – were actually tags that were not from St. Johns County.”

Hardwick and Gill both said a re-opening of beaches should also include a restriction to exercise and recreational activities, not to allow sunbathing and general congregating.

“Let’s give them a chance to get back on the beaches and get some distancing out there,” Hardwick said, giving such specific examples as surfers, swimmers and paddleboarders.

“The only thing that people really want to do is, they want to walk on the beach and take photos of the sun coming up,” Gill said. “They don’t want to sit on there all day long. We know that’s not doable now.”

A regularly-scheduled county commission meeting is set for Tuesday, April 7 at 9 a.m. Although the debate about beach closures is not part of the agenda, Hardwick said he anticipates it being discussed.

“I’m not sure if any changes will come this Tuesday, but I believe there’ll be talk of it,” Hardwick said, adding that there will be open ears to hear that talk. “Our residents are very vocal about this, and our county commissioners, our county officials, our city officials from both cities are listening.”

On its Facebook page, the St. Johns County Government Connection gives the following information about meetings and public participation:

“St. Johns County Boards and Committees – Public Comment Call-in Participation In accordance with Executive Order 20-69 and St. Johns County Emergency Proclamation 2020-03, St. Johns County Boards and Committees that meet during the COVID-19 health emergency may do so remotely under communication media technology and without a physical quorum of the members present. Members of the community who would like to participate in public comment during these meetings may do so by calling 904.209.1265. The meetings can be viewed on GTV, Comcast cable channel 3, or online [here] While all meetings remain open to the public to attend in person, St. Johns County facilities are under limited public access restrictions. Written or physical documentation for a meeting may be submitted to the Board of County Commissioners at 500 San Sebastian View, St. Augustine, FL 32084, or by email at sjcpublichearing@sjcfl.us. For more information, please call 904-209-0300.”