The 176-room hotel, 25 luxury condominium building, and an office building would rise up on property that used to have the Kids Kampus on it. 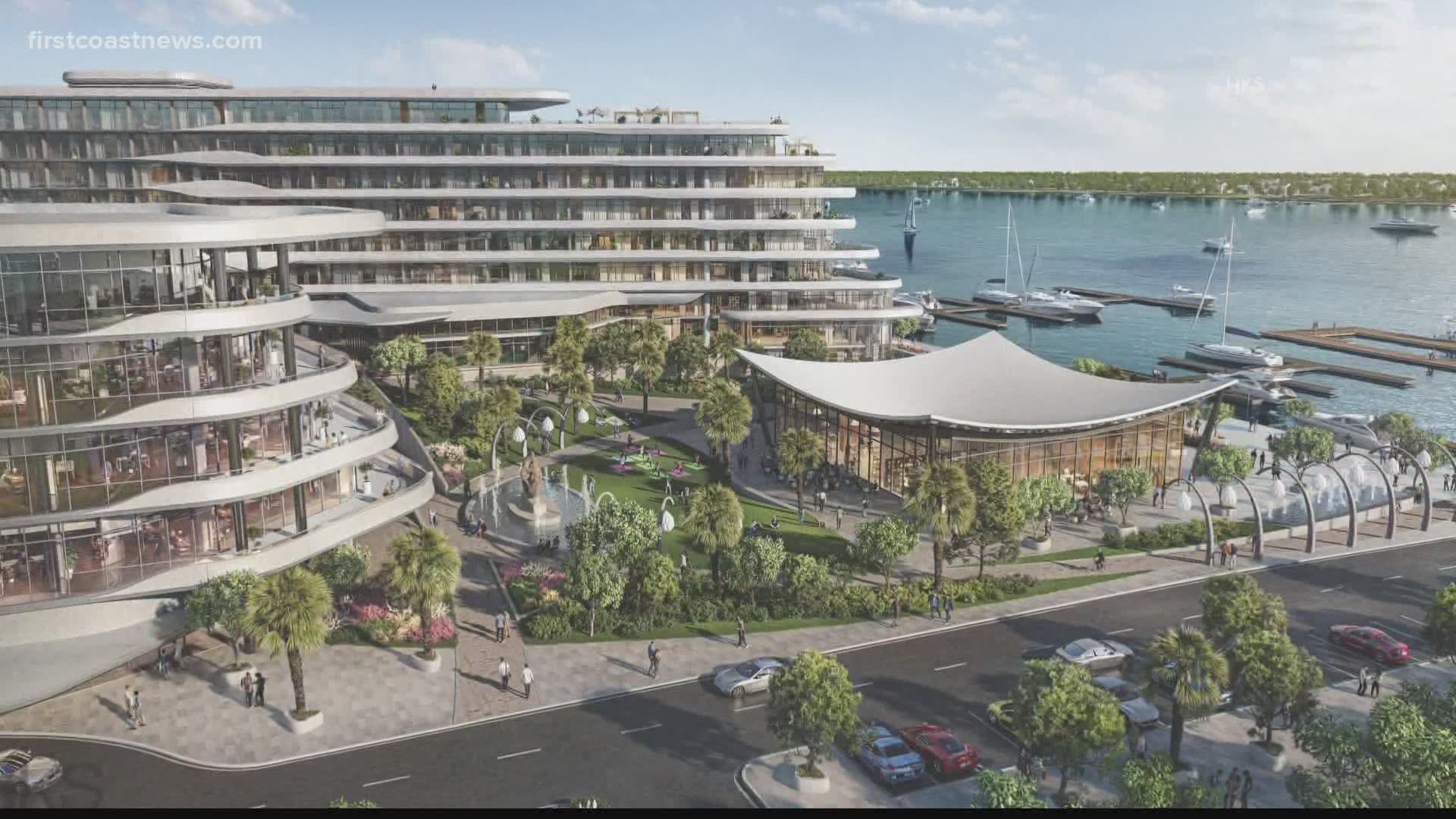 JACKSONVILLE, Fla. — Jaguars owner Shad Khan's plan for a Four Seasons hotel development on the downtown riverfront cruised ahead Friday when the Downtown Investment Authority board unanimously supported providing city-owned land and various incentives for it.

The 176-room hotel, 25 luxury condominium building, and an office building would rise up on property that used to have the Kids Kampus on it before that playground was dismantled a decade ago near the sports complex.

To make up for the loss of park land to the development, the city is working with the Jessie Ball duPont Fund on a study over the summer about turning about 11.5 acres of vacant city-owned property known as The Shipyards into a riverfront park closer to the downtown core.

DIA board member David Ward said it's a good mix of private development and public space.

"I think this is a great economic driver for downtown near and next to the stadium," he said. "It's a great balance for a lot of different interests, and it's not easy to shoot the gap on something like this when there's a lot of issues in play."

During discussion by DIA board members, Oliver Barakat asked Jagaurs President Mark Lamping what kind of long-term commitment Four Seasons would have with Khan's firm Iguana Investments in a Jacksonville hotel.

He said the Iguana and Four Seasons haven't completed negotiating "all of the exact details of the licensing agreement" but it would be typical for such an agreement to be for 10, 15, or 20 years.

Lamping said Four Seasons is a publicly-held company so it doesn't make public comments on speculative development. He said the proposed hotel development "by definition" still is speculative until it gets all its government approvals.

"We'll have the agreement with the Four Seasons before we start construction," he said.

Talking to reporters after the meeting, Lamping said Khan owns a Four Seasons in Toronto and has "very good relationships at the highest level of Four Seasons." Lamping said he has been engaged with Four Season's executives who oversee the company's licensing division for months.

"The fact that we stipulated Four Seasons on our term sheet (with the city) should tell you how confident we are," Lamping said.

The vote Friday by DIA will be that board's final action unless another developer comes forward over the next 30 days and puts its own offer on the table for the former Kids Kampus property. The next round of votes would be at City Council.

How much would Shad Khan pay vs. the City of Jacksonville?

Khan would spend $301 million building the hotel and residences along with the office building.

The city would provide $114 million in the form of donated land, spending on reconstructing the city-owned public marina at the site, paying to relocate some small city-owned buildings, and providing two types of cash incentives for Iguana Investments.

The cash incentives would start with a $25.8 million "completion grant"  after the hotel, residences and office building are constructed.

The city would then provide $47.7 million in property tax rebates paid out over a 20-year period based on returning 75 percent of the city taxes generated by the value of the new development.

If the hotel stopped being a Four Seasons brand with its five-star ranking, the city would halt the property tax rebates unless the DIA board approved a different flag for the hotel that still is a four-star or five-star brand.

DIA board members praised putting that clawback into the development agreement.

Lamping said the provision is intended to provide flexibility if there were a change in the hotel brand in the future. "It's just one of those things that you have to be prepared for because none of us can predict what's going to happen 10, 15, 20 years from now," he said.

What's next for the Four Seasons plan?

In addition to needing City Council backing, the proposed development also must get Florida Department of Environmental Protection approval because a state park grant awarded in the mid-1980s restricts the Kids Kampus site to outdoor recreational activities.

DIA CEO Lori Boyer showed the board the latest conceptual plan by the duPont Fund for The Shipyards site as part of the fund's study on activating both sides of the riverfront in downtown.

The replacement land for the park would come on about 11.5 acres of land west of Hogans Creek where several piers just into the river. Boyer said the duPont Fund will get public feedback on the park and in August, the city will go to the state with a park plan for the land swap.

"I will say I'm optimistic," she told the board.

Riverfront Parks Now, a group that has pushed for more parks on the downtown riverfront, praised the direction the study is moving with public engagement.

"What we've said all along is we want the community to help decide," said Nan Powell.

She said Riverfront Parks Now wants a "live park, and if this plan gets us a renovated park that has all those exciting things that we've seen in other cities, then that's a good step forward."