Frank Skinner tells First Coast News he put on the hat as the mall was closing and there were no children around. 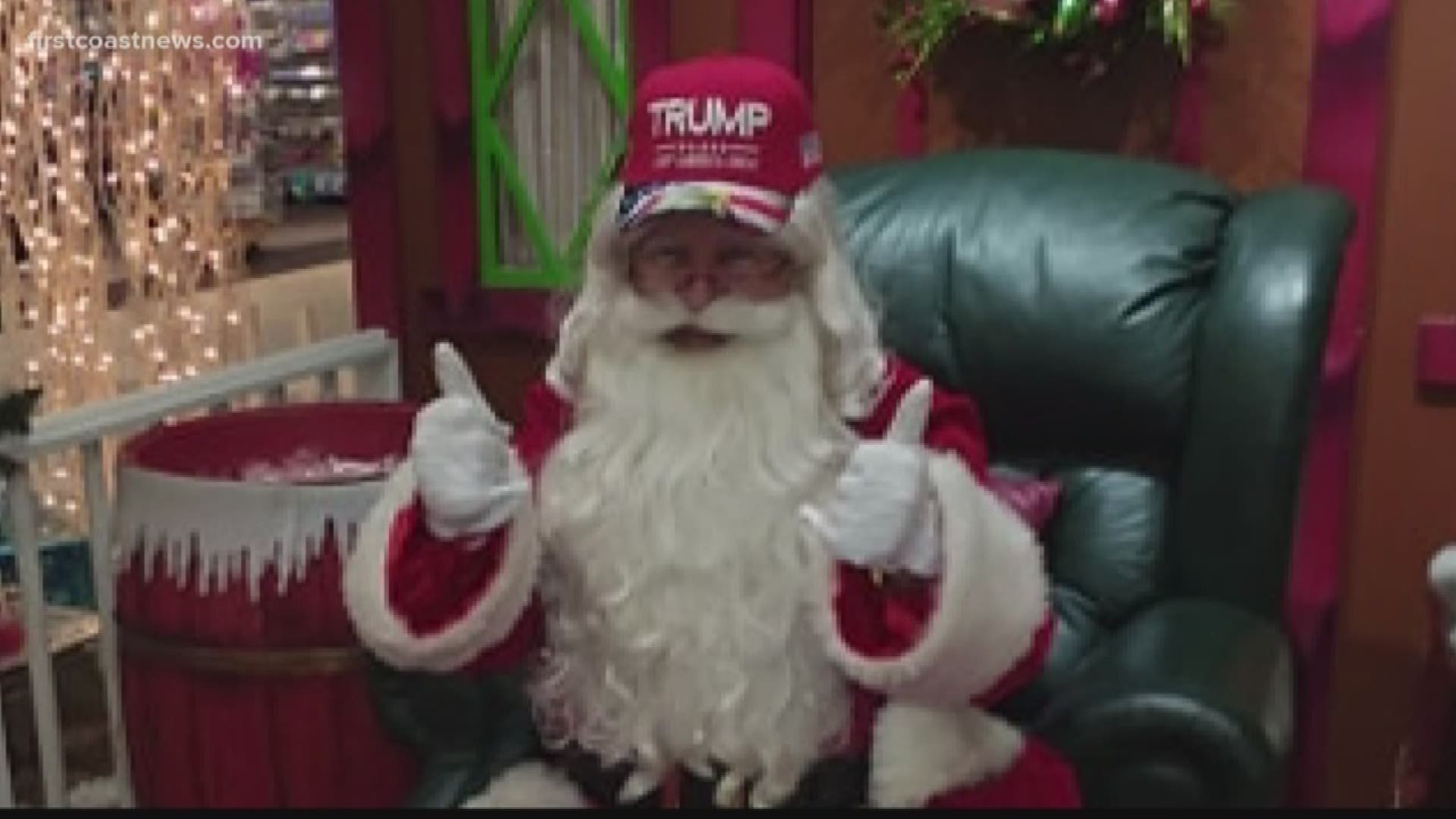 WAYCROSS, Ga. — A Santa Claus who sparked controversy after posting a photo of himself wearing a hat supporting President Trump at a Georgia mall shared his side of the story Tuesday via Facebook.

Frank Skinner has played Santa Claus every Christmas for nearly 50 years, including the past 14 years at the Mall of Waycross in Georgia.

RELATED: Trump-hat-wearing Santa pulled from Georgia mall; 'This particular Santa will be replaced'

Skinner said the mall was closing and no children were around when he decided to switch hats and pose with the President Trump hat for fun.

Skinner believes someone saw the photo on his Facebook page and sent it to mall management - he was then told not to come back.

"I just felt like my constitutional rights were being taken away," he said.

In a lengthy statement posted to his personal Facebook page Tuesday afternoon, Skinner said he didn't intend to "create a firestorm by doing that but simply intended to post the photo on my page for a little humor, as I have many friends and family who, like me, support our president."

Skinner said after he posted the photo to his personal Facebook page, someone took a screenshot of the photo and reported it. The photo eventually made its way to mall management with a request to remove the hat. Skinner said the request was made out of context "as if I wear [the hat] all day."

Since that day, Skinner said he's unsure what actions the mall will take next after he was replaced as management investigates.

No matter what happens next, Skinner wants to make it clear that he did not intend to offend and that he's learned a serious lesson.

"I in no way meant to cause anyone discomfort," Skinner said. "At the time I thought it was harmless fun. Now I realize in this day and age that I should not have posted it. Obviously it did offend some folks. I can assure everyone that was not my intent. I have learned a lot from this. Going forward I will keep this in mind."

Skinner's entire statement can be read after the following image.

"I would like to address the truth as to what happened at the Mall of Waycross concerning me and the photo taken with a President Trump hat on, and the subsequent supposed firing.

It was about time to close at the mall for Santa. There were no children around and on a whim I decided to switch hats and pose with a President Trump hat. For fun, I took the picture for personal use, with my personal phone. Later, for laughs, I posted it on my personal Facebook page. I certainly was not trying to create a firestorm by doing that but simply intended to post the photo on my page for a little humor, as I have many friends & family who like me, support our president. I knew they would enjoy the photo and get a laugh. Obviously, that turned out to be poor judgment on my part. I didn’t anticipate how upsetting that would be to some members of our community. For that, I’m deeply saddened and apologize.

Unfortunately, after posting the photo someone went to my personal Facebook page and took a screenshot to use and report. I don’t know the exact actions taken by that community member from that point, on, but somehow the Mall management received a request for the removal of my trump hat, (request sent out of context as if I wear it all day) & First Coast News received the photo as well. The news contacted the mall management for a statement. The statement the mall received claimed I would be replaced and from that point, on this, all became a massive controversy.

When I spoke to the Mall management they advised me that I would be removed from the rotation for a few days to investigate. Then I read the statement made by the Mall Management to the news and gathered I had actually been fired. I was just as confused as everyone else as to what was going to happen next. I’m still waiting for official communication. Together we trying to discern what’s appropriate going forward. There has been no official action at this point.

The misinformation caused quite a backlash. It was painful & overwhelming to watch all the comments and untrue stories spread. For the sake of clarity, I want to come forth and assure everyone of a few things.

* I in no way meant to cause anyone discomfort. At the time I thought it was harmless fun. Now I realize in this day and age that I should not have posted it. Obviously it did offend some folks. I can assure everyone that was not my intent. I have learned a lot from this. Going forward I will keep this in mind.

* No, I did not have a parent or child ask me to where the Trump hat for them. As I said earlier there were no children around. I would never have done that. It was suggested that I was trying to make a child happy by fulfilling a request to wear the hat. Of course, if there is a request made to me by anyone I try to find way to make them happy, I do my best as Santa to make that happen. However, I have enough common sense to know that when a child approaches you while in a Santa suit that your role is to be Santa! It's never Santa’s job to bring politics into the fray.

I have been a Santa for almost five decades and I have always done my best to be the finest Santa I could be. People who know me know my character. They know that I don’t take my role lightly. When a child comes to me I sing, dance and yes, even pray with them if they have a prayer need. I have been blessed to pray for many. I feel like God has chosen me for this role and have had many testimonies as I look back. One day I hope to share all these special stories.
* I want to publicly apologize to RCG Ventures, the mall manager Jimmy White and to you the public. If I caused you any discomfort I’m sincerely sorry.
* With all the heartache something else came out of this as well. I do want to thank those who came to my defense. The outpouring of love I felt was incredibly overwhelming. I am eternally grateful for your unconditional support. I did not take any comfort in all this confusion but I certainly found comfort in the support sent my way. This meant more to me then you will ever know!

Concerning the Go fund me; That was set up for me by a friend. I just want to make it clear I did not seek out anyone to do this for me. This was done in kindness by a friend who knew how important my job as Santa actually is to me financially. I was surprised to see it set up and equally surprised by the support it received. But in all fairness, I have no problem returning the money to anyone who contributed. This is not about the money I can assure you of that. If anyone wishes to have their contribution returned please contact me and I’m willing to return it. I would never take advantage of anyone’s kindness in our community. Especially with so much confusion.

I am willing to accept my responsibility and let the cards fall where they may. I also want to make it clear I love all children !! I do my utmost best when they come to see me that they feel special. Again, people who really know me can testify to what I have shared. in closing lets all remember this is the Christmas Season lets put aside our differences and LET'S CELEBRATE IN KEEPING CHRIST IN CHRISTMAS !!!!"